Sorry – grin – what should one expect of some goofy Olde Cape Cod Chipotle Ranch Dressing – mishmash!

HealthMap Reports: Recent reports of local and regional dengue or imported cases of dengue from official, newspaper, and other media sources. View source »

Erdem Gündüz feels somewhat uncomfortable as he stands in front of the Atatürk statue once again, worried that it might be too contrived. But he doesn’t need convincing. “I know the power of photos and what you journalists want,” he says with a smile.

An 81-year-old man who was lying in wait with a .22-caliber rifle for a raccoon accidentally shot himself after sneezing and falling from a chair in New Haven, Conn., Saturday night. James Pace Sr. told authorities that a raccoon had been scratching at his back door for several days. Detectives seized the rifle and are investigating the incident.

Megan Bookstaver, 23, was shot in the head and killed while examining firearms with her boyfriend and two others in a townhouse in Tarrytown, N.Y., Monday. The gun involved was a “long gun” that did not have to be registered, but there were other unregistered guns found in the home. Police are calling the shooting “suspicious.”

7-year-old Desirae Macias was left brain dead after gunmen opened fire on her family following a fight at a Palmdale, Calif., gas station, early Wednesday. Sheriff’s deputies said the conflict began when the boyfriend of the victim’s mother got into an argument with three men. Though he tried to disengage from the fight, citing his family in the car, the suspects followed them for several miles before opening fire. The gunmen were arrested.

A 10-year-old girl was accidentally shot and wounded during a family hunting trip in Burley, Idaho, Sunday morning. The sheriff’s office investigated the shooting and ruled it was accidental. No word on whether anyone will be charged.

According to the Centers for Disease Control, 31,672 people were killed by firearms in America in 2010. Slate’s gun-death tally, which we include at the end of each post, has recorded 7,897 deaths since the Newtown massacre last December—almost three times the total killed on Sept. 11, and nearly double the number of U.S. soldiers killed over the course of the nine-year-long Iraq War.

Sobering as this tally is, there’s still a glaring disparity between the C.D.C. figures and S

Will not be long before state legislature that believes in knows everything – will move to take away this power from state government because it interferes with right to be dumb and give others the flu!

The North Carolina Department of Health and Human Services recently directed leaders of 14 state-operated healthcare facilities to institute a mandatory flu vaccination policy for 10,000 employees and volunteers to protect patients.

Employees of the DHHS Division of State Operated Healthcare Facilities were told about the policy in late August. Employees must be vaccinated by December 1. 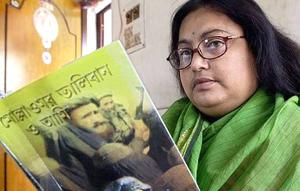 Indian national Sushmita Banerjee, whose memoir about her dramatic escape from the Taliban was turned into a Bollywood film, was shot dead in Afghanistan by militants, police said on Thursday.

via Indian author Sushmita Banerjee shot dead in Afghanistan – The Times of India.

More proof that humans can convince/delude themselves into justifying anything they want to do or might make a profit or career for someone – even if inordinately dumb and dangerous!

The question here is whether there was reasonable moral warrant for genetic alteration of the H5N1 influenza virus.

Conclusion: The paper concludes with philosophical (ethical) justification for continuation of this research.

via Engaging the normative question in the H5N1 avian influenza mutation experiments.