“Over 90 percent of the genetic ancestry of present-day Lebanese was derived from the Canaanites,” said Chris Tyler-Smith, who was on the research team. “In light of the enormously complex history of this region in the last few millennia, it was quite surprising.”

warning: this video contains images that may cause upset.I put up some of the most powerful photographs we have all more than likely seen at some point in our lives.the things we humans do to each other!they all seemed to fit with the music.

I’ve been into slam poetry for more than two years now and Button Poetry is one of my favorite YouTube channels. I love it so much that it’s the only YouTube channel for which I’ve enabled notifications.Late last night, Lebanon-time, I get a notification that a new poem by Jess Rizkallah has been uploaded. Intrigued by the name, I open the YouTube video to find one of the most enriching, gut-wrenching poems I’ve listened to on that website in months.In three short minutes, Jess Rizkallah was able to convey the struggles that she, a Lebanese-Arab-American woman in the United States goes through trying to juggle her Arab side with her American side, in a culture that is increasingly putting both of her components at odds. I mean just look at a creature like Donald Trump existing and at people, many of whom are Lebanese unfortunately, applauding him.

Source: Meet Jess Rizkallah: The Lebanese-American Whose Poem On Being Torn Between Being Arab & American Will Blow You Away | A Separate State of Mind | A Blog by Elie Fares

In the face of such disgusting slogans, I invite this blog’s followers who vote in Jounieh to refuse such hateful, xenophobic notions and to vote for the list opposing “Karamet Jounieh” on Sunday, which is the list calling itself “Jounieh El Tajaddod.”At a time when Christians in Beirut refused to be treated with the hateful, segregating rhetoric that Karamet Jounieh is giving its people in Jounieh by voting for Beirut Madinati, the last thing we need in this country is for such divisive talk to be center stage in any elections. Less fear and hate, more tolerance.

Source: Sectarianism & Islamophobia: Jounieh Wants To Become The “Christian Capital” of Lebanon | A Separate State of Mind | A Blog by Elie Fares

Wednesday’s move against Hezbollah reflects deeper regional divisions between Sunni-ruled Saudi Arabia and Shiite powerhouse Iran, Hezbollah’s patron. Saudi Arabia cut diplomatic relations with Iran earlier this year after protesters angry over the kingdom’s execution of influential Shiite cleric Nimr al-Nimr set fire to the Saudi Embassy and another diplomatic mission inside Iran. Saudi Arabia in 2014 designated a Saudi affiliate of Hezbollah a terrorist group along with the Muslim Brotherhood, al-Qaida, Yemen’s Shiite Houthis and other groups. The GCC announcement came a few hours after a televised speech by Hezbollah leader Sayyed Hassan Nasrallah in which he harshly criticized Saudi Arabia for punitive measures that targeted Lebanon recently, including the halt in aid and Gulf travel warnings. He repeated his accusations that Saudi Arabia was directly responsible for some of the car bombings in Lebanon, Syria and Iraq and denounced Saudi “massacres” in Yemen. “Who gives Saudi Arabia the right to punish Lebanon and its army and Lebanese people living in Saudi Arabia and the Gulf just because Hezbollah is speaking out? We urge Riyadh to settle accounts with Hezbollah and not all the Lebanese,” he said. He also accused Saudi Arabia of seeking to cause strife between Sunnis and Shiites everywhere in the world and said its execution of al-Nimr in January came in that context.

in recent weeks, American Muslims have reported a spate of violence and intimidation against them: women wearing head scarves accosted; Muslim children bullied; bullets shot at a mosque in Meriden, Conn.; feces thrown at a mosque in Pflugerville, Tex.Omair Siddiqi said he had been about to get into his car in the parking lot of a shopping mall in the Dallas suburbs last month when a man came up to him, flashed a gun and said, “If I wanted to, I could kill you right now.”Mr. Siddiqi said he stayed quiet and the man walked away. Mr. Siddiqi called 911 and is now in the process of getting a concealed-handgun permit. “It’s very scary in times like this,” he said.In a Dallas suburb, about a dozen protesters congregated outside the Islamic Center of Irving last month, some covering their faces with bandannas and carrying hunting rifles, tactical shotguns and AR-15s. The group that organized the protest posted on Facebook a list of the names and addresses of dozens of Muslims and what they called “Muslim sympathizers.”

Source: Muslims in America Condemn Extremists and Fear Anew for Their Lives – The New York Times

During the international conference in Occupied Jerusalem with the French Ambassador, the Israeli prime minister, Benjamin Netanyahu described Muslims as “animals”  who need to be defeated. According to Israel Hayom daily, Netanyahu made this statement during the foreign diplomats conference, tackling last week’s attacks on France.Referring to Muslims as “dangerous animals,” Netanyahu also said that there were a lot of them in [Israel], adding that the world needs to understand the seriousness of the problem, indicating the need to “defeat these animals.”“The beasts increasingly have a name — it is radical Islam. That is what is doing the killing, the murder, the rape, the burning, the beheading.A day before, the Israeli minister of Education, MK Naftali Bennett said that “[Israel] should have killed more [Arabs] because anyone who lifts a hand against Israel must die.” 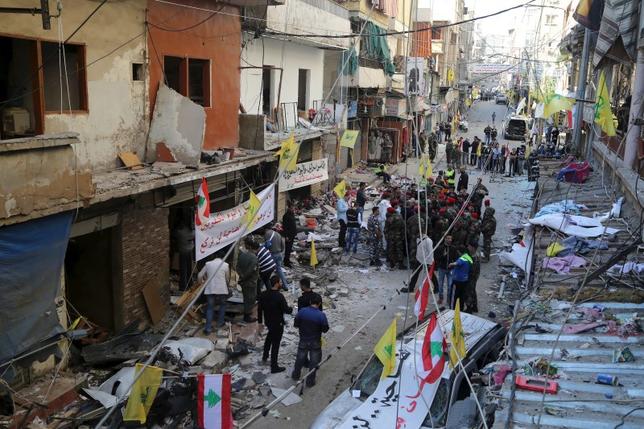 Lebanese authorities arrested five Syrians and a Palestinian in connection with the twin suicide bombings in central Beirut on Thursday that killed 43 people, a senior security source said on Saturday.The bombings in a busy residential and commercial area that is a stronghold for Lebanese Shi’ite movement Hezbollah were claimed by Islamic State.”Within 24 hours the network was arrested in the fastest uncovering of a bombing incident in the country,” the source said.

Tonight, Haidar lost his mother and father. Shawki Droubi and Khodr Aleddine, a nurse, were lost to their families. Hussein Mostapha passed away with his wife, leaving their son behind. Samer, a Syrian father of two who fled horrors in his country, was killed in what he had feared back home, and Hussein, a Palestinian man whose family sought refuge here, also passed away. Alaa Awad, a third year law student, was also among the victims. Rawan Awad was a school teacher. Hanady Joumaa, Bilal Hammoud, Ahmad Awwada, Rawan Atwi were among the victims too.

Source: Adel Termos: The Lebanese Hero Of the Borj el Barajneh Terrorist Attacks | A Separate State of Mind | A Blog by Elie Fares