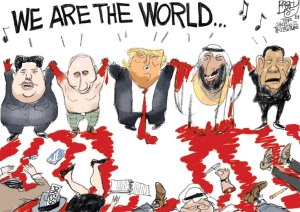 JOKE:   They’re laughing–  Other countries don’t have to wait:  U.S. citizens are killing off each other themselves, without forcing other countries to waste lives  in a war

As long as U.S.  liberals spend energy calling Republican accusations conspiracies, the less likely will it be to look at them as possible evidence of SABOTAGE of democracy.  Evidence of actual increasing purposeful sabotage of America’s democracy?