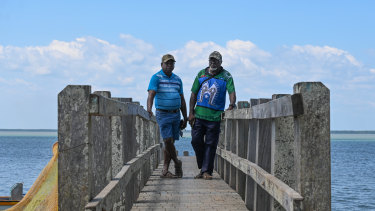 Pabai Pabai (left) and Paul Kabai on the jetty in Boigu, a low-lying island in the Torres Strait. They are taking the government to court, insisting it exercise its duty of care to them and prevent catastrophic climate change and sea level rise.

In the first Australian climate class action brought on behalf of First Nations people, the Gudamalulgal traditional owners from the remote, low-lying islands of Boigu and Saibai say the government’s failure to reduce emissions will force their communities to become Australia’s first climate-change refugees.