First Nations communities have fallen on both sides of the argument. Several Indigenous communities have quietly demanded the B.C. government immediately defer logging its oldest trees, warning it “will ultimately bring about our physical destruction.” At Fairy Creek, where multiple arrests along a blockade have continued to draw the media’s spotlight this week, the Pacheedaht First Nation have said old-growth activists are “not welcome.”

A hundred kilometres across the Salish Sea, another Indigenous nation has been locked in a protracted fight to protect a swath of old growth sacred to their people. They fought back, and in March, won — protecting a 70.9-hectare cutblock of forest from immediate destruction.

As old-growth forests dwindle across the province, their success shows what it takes to walk another path and protect B.C.’s last arboreal giants. 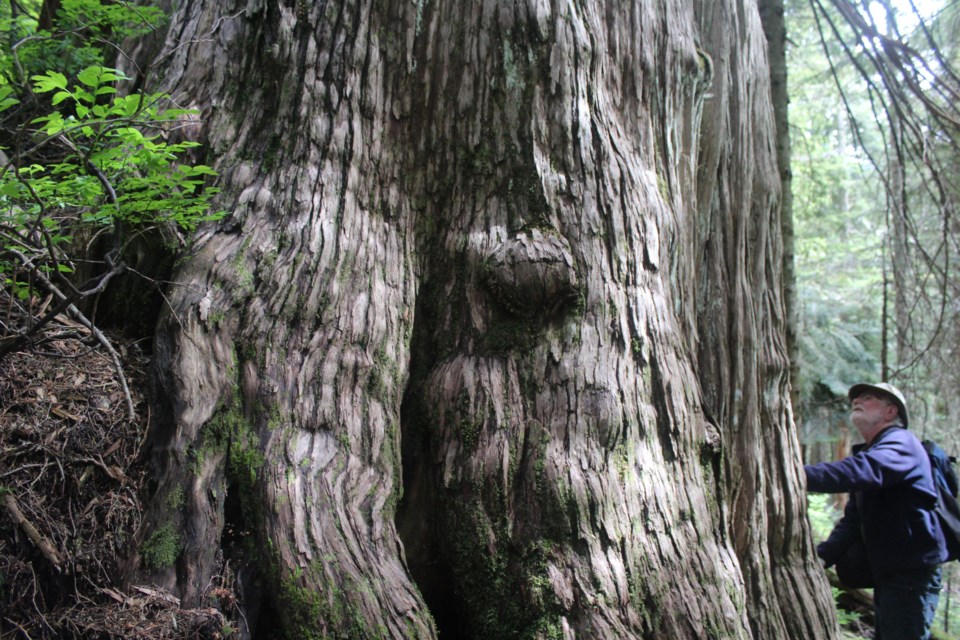 Elphinstone Logging Focus campaigner Hans Penner at the base of a large yellow cedar in Dakota Bowl. By Ross Muirhead

For the Squamish Nation, Dakota Bowl is one of its last untouched tracts of forests.

Rising up the slopes of Elphinstone Mountain on the Sunshine Coast, its high-elevation yellow cedar forests have been described as a “living museum.”

Prized for its strength and softness as clothing material, some West Coast Indigenous communities would travel great distances to harvest the inner bark of the yellow cedar; some believed the high-elevation trees possess supernatural qualities.

Khelsilem said his nation’s push to protect the 70.9-hectare cutblock required years of research and policy work. He points to 2003 when the nation developed a land-use plan that sketched out how it wanted to use forested lands. Later, the nation sent out its own experts in archaeology, cultural heritage and the environment.

Archaeologists have found evidence that dozens of old-growth trees had been used by the First Nation dating back hundreds of years — in the end, 77 so-called “culturally modified trees” would be mapped in the forest.