This story was contributed by fellow blogger, Mike Tuggle, in tribute to his father, who sailed his final voyage this past Saturday.

I was one of the approximately twelve hundred men aboard the USS Birmingham CL-62. We set out for Okinawa in March, 1945. 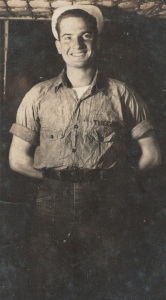 Arriving in Okinawa, we were stationed about five miles from shore. We bombarded the island with 6-inch guns at night hitting several ammunition dumps and shore guns of several sizes. This went on until the invasion began on April 1, 1945. This battle was something entirely different from any the Navy had experienced. Torpedoes were exploding all around our ship, the skies were full of explosions from guns on both sides.

On the 5th of May, 1945, I was cleaning officers’ quarters when the captain [John Wilkes] came on the PA system…