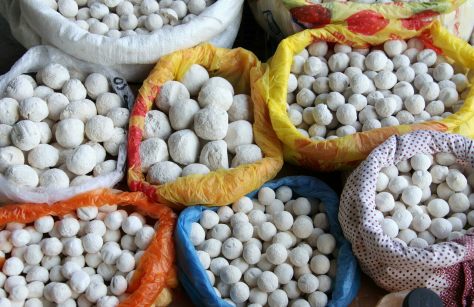 Qurt’s portable nature and long shelf life made it an ideal road food for Central Asia’s nomadic peoples. According to Kazakh historian Moldir Oskenbay—who likens the taste of qurt to “a dried and salted feta cheese”—it dates at least as far back as the seventh century B.C., when the Scythians roamed the Eurasian Steppe. Kazakh, Kyrgyz, Turkmen, Uzbek, and other groups of herders took along versions as they moved to graze their animals. “Qurt was a really good way for them to preserve the yogurt so they could eat it while they traveled,” says Malika Sharipova, a food blogger from Uzbekistan who has written about making traditional Uzbek cuisine. Source: Make the Ancient Road Snack of Central Asian Nomads – Gastro Obscura