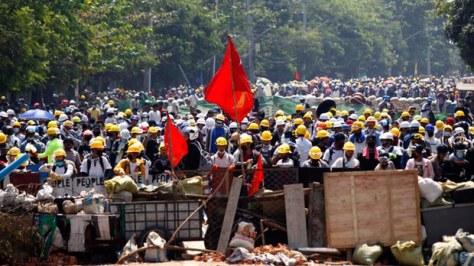 Myanmar security forces shot dead an anti-junta demonstrator in Mandalay on Friday, driving the death toll from violent crackdowns in Myanmar’s second-largest city up to 11, while the hasty exhumation of the body of protester killed earlier in the week added to anger at military authorities.

The death came as more police quit their jobs to join the protest movement and the U.S. ambassador in Yangon had his first meeting with the junta in the nearly five weeks since the army deposed leader Aung San Suu Kyi and her elected government, sparking daily protests across the country.

In Mandalay, Zaw Myo was shot in the neck as he marched with fellow engineers in a morning protest. Though he received emergency treatment at a private clinic, he died of his wound a few hours later, leaving behind a pregnant wife and a young son, they said.