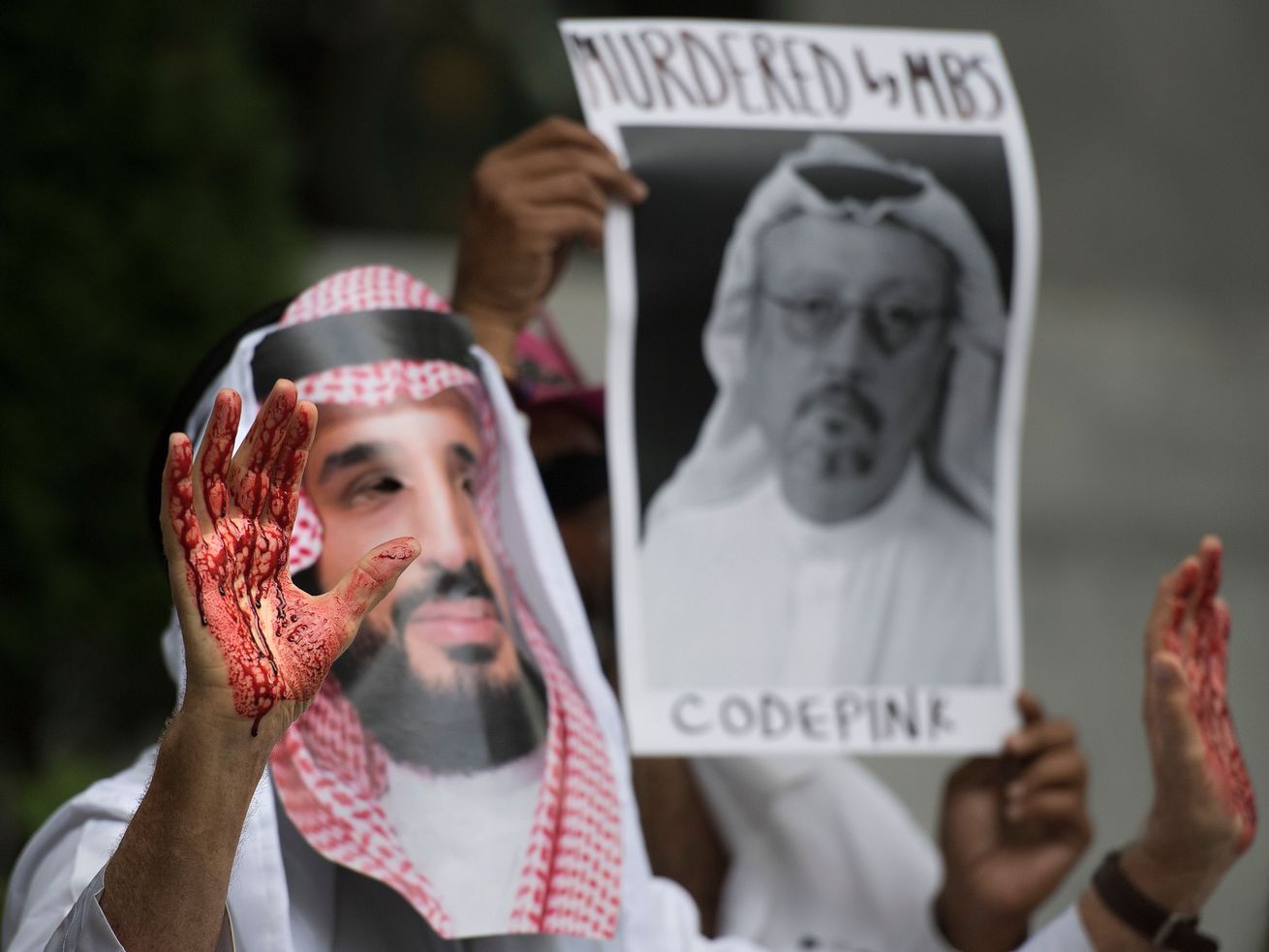 A demonstrator dressed as Saudi Arabia’s Crown Prince Mohammed bin Salman with blood on his hands and holding up a picture of Jamal Khashoggi, protesting outside the Saudi Embassy in Washington, DC, on October 8, 2018. | Jim Watson AFP via Getty Images

The Biden administration has just released an unclassified version of an intelligence report confirming who ordered the 2018 murder of Washington Post columnist and Saudi dissident Jamal Khashoggi: It was Crown Prince Mohammed bin Salman.

That conclusion was an open secret, as news reports shortly after the grisly assassination cited classified intelligence pointing to Mohammed bin Salman (often referred to by his initials, MBS) as having personally ordered the killing at the Saudi consulate in Istanbul, Turkey. That intelligence included, among other things, information about the crown prince’s phone calls in the days before the murder, and calls by the kill team to a senior aide to the crown prince.

After a 2018 CIA briefing on the classified intelligence, retired Sen. Bob Corker (R-TN), then the Senate Foreign Relations chair, said there was “zero question that the crown prince directed the murder.”

But this is the first time the public can an unclassified intelligence report on the murder for itself. While parts of the three-page document is redacted, it states up front that “We assess that Saudi Arabia’s Crown Prince Muhammad bin Salman approved an operation in Istanbul, Turkey to capture or kill Saudi journalist Jamal Khashoggi.”

Based on MBS’ control over the country’s intelligence and security sectors, the report continues, it was “highly unlikely that Saudi officials would have carried out an operation of this nature without the Crown Prince’s authorization.”

The ODNI has released its report on the killing of Khashoggi.

Despite having been fully informed of the classified report’s conclusions in 2018, the Trump administration refused to severely punish Saudi Arabia for the murder of the Virginia resident or to directly blame MBS.

Instead of curtailing US-Saudi ties, then-President Donald Trump said it was better to maintain friendly relations in order to keep cashing the kingdom’s checks. “I don’t like stopping massive amounts of money that’s being poured into our country,” he told reporters shortly after the murder from the Oval Office, referring to his desire to sell $110 billion worth of weapons to the Kingdom. “It would not be acceptable to me.”

Trump was so proud of the decision not to punish MBS or his country that Trump later bragged to reporter Bob Woodward later that “I saved his ass.”

President Joe Biden has taken a different tact. After calling Saudi Arabia a “pariah” during the campaign, in power he’s curtailed MBS’s access to the Oval Office, making clear that Biden considers his direct counterpart in the country to be MBS’s father, King Salman, the man who actually sits on the Saudi throne. As for MBS, his counterpart is Defense Secretary Lloyd Austin. The crown prince, after all, is his nation’s defense minister.

The US also ended its support for Riyadh’s offensive operations in Yemen, which began during the Obama administration, though the US military will still help protect Saudi Arabia against regional threats.

The State Department plans to announce possible retaliations against Saudi Arabia on Friday, roughly an hour after the report’s release.

The public reveal of the unclassified Khashoggi intelligence, as mandated by Congress and promised by Director of National Intelligence Avril Haines, is yet another signal of a frostier US-Saudi relationship. Both nations will remain partners, but MBS is surely an unwelcome interlocutor for this administration, and perhaps future ones.

You can read the redacted, unclassified intelligence report below:

Here is the declassified @ODNIgov document accusing MBS for approving operation that killed #JamalKhashoggi. It includes list of individuals who allegedly participated, complicit or responsible for the death of #Khashoggi pic.twitter.com/k4ucragl7Q