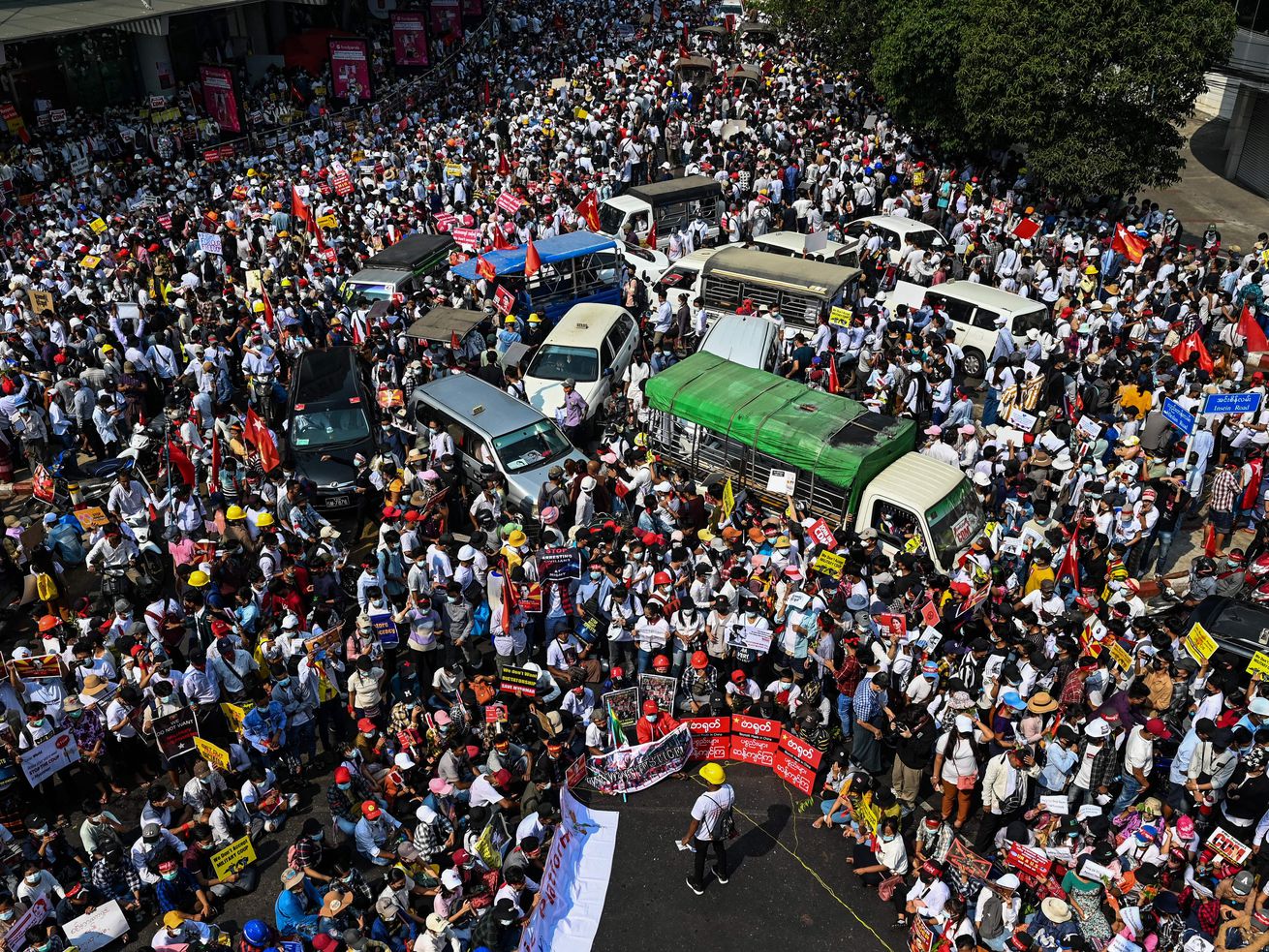 Protesters mass around vehicles as they block roads during a demonstration against the military coup in Yangon, Myanmar, on February 22, 2021. | Ye Aung Thu/AFP via Getty Images

On Monday, the country saw one of the largest uprisings yet against the February 1 military coup.

Myanmar saw its largest nationwide protests since the military coup earlier this month, with hundreds of thousands of people demonstrating in the streets and businesses shutting down across the country.

Monday’s protests are the latest in a nearly month-long civil disobedience campaign that erupted in response to the February 1 takeover by Myanmar’s military that saw the country’s civilian leaders detained and ended the country’s decade-long experiment with quasi-democratic governance.

Since then, mass demonstrations have taken place across the country and citizens have engaged in acts of resistance, from lying across train tracks at a station in Mandalay, Myanmar’s second-largest city, to work stoppages that now threaten Myanmar’s economy.

Monday’s demonstrations — which some are calling the five twos, or the “22222 uprising” — saw hundreds of thousands of protesters take to the streets of Myanmar’s cities; stores, banks, and fast food chains shut down in solidarity. Protesters chose the date because it echoes the August 8, 1988 (8/8/88) protests against military rule, which the military suppressed in a bloody crackdown.

Monday’s action went forward despite the military’s threats that mass resistance would lead to “a confrontation path where [people] will suffer the loss of life.”

In cities like Yangon, authorities set up barricades and parked armored vehicles to try to block the mass gatherings, but the protesters were undeterred. The demonstrations were largely peaceful, though there were sporadic reports of violence and arrests, particularly in the capital of Naypyidaw.

But at least three people have died in confrontations with police since the protests began, including two protesters who were killed in Mandalay when police fired live and rubber bullets into a crowd of striking workers. The first protester to die — a 20-year-old woman who was hit by a bullet at a Naypyidaw protest — has helped galvanize the movement, despite fears of an even more aggressive crackdown from the military rulers.

The military junta continues to impose internet and communication blackouts, an attempt to prevent people from organizing. Activists also worry that the blackouts may give authorities cover to try to arrest protesters and other political organizers. According to the Assistance Association for Political Prisoners (Burma), a Thailand-based human rights organization, 684 people have been arrested, charged, or sentenced since the February 1 coup, and 637 people are still in detention or face outstanding warrants.

The protesters are demanding the end of the military junta and the restoration of the democratically elected civilian government, led by Aung San Suu Kyi. Suu Kyi and her party, the National League for Democracy, won overwhelmingly in elections in November.

But just as the new government was set to be sworn in, the military interceded and insisted the election results were invalid because of widespread voter fraud. Neither the country’s Union Election Commission nor international observers found evidence of widespread irregularities that would have changed the outcome of the vote. Still, the military has claimed that it will retain control until it can host new elections in a year.

The military retained a degree of control even after the country undertook democratic reforms about a decade ago, but the February coup dispensed with even a nominal democratic government. The ousted Suu Kyi was detained and eventually charged with allegedly importing illegal walkie-talkies. Another charge — of meeting with a large crowd in defiance of Covid-19 public health measures — was announced last week as the leader’s trial began in secret.

But Myanmar’s civilians have met the military’s actions with sustained resistance, pulling from a wide swath of Myanmarese, including students, teachers, doctors, bankers, and laborers. Members of Myanmar’s persecuted ethnic and religious minority groups — who still faced repression under Suu Kyi’s leadership — have also joined in the uprisings.

Protesters have also called out the military’s repression of the Rohingya and other minority groups with signs during the demonstrations, a remarkable show of solidarity.

Protesters hold a poster mentioned “we deeply apologized all Kachin to Rohingya who are under oppression “ during protest in Myanmar. credit: Khin Zaw Myint Facebook post. #WhatsHappeningInMyanmar pic.twitter.com/xmtoiFbHIm

Activists inside and outside Myanmar continue to worry that the military will lose patience and decisively try to crack down on the movement; at the same time, the pro-democracy resistance is strengthening despite the junta’s warnings and attempts to cut off communications.

The international community has also condemned the Myanmar coup. The Biden administration is sanctioning military members who orchestrated the coup, preventing them from accessing about $1 billion in the United States. It represents one of the first international tests for the White House, though its options are limited in how much pressure it can place on Myanmar. Still, the administration has made clear that it is closely watching as the uprisings unfold.

“The United States will continue to take firm action against those who perpetrate violence against the people of Burma as they demand the restoration of their democratically elected government,” Secretary of State Antony Blinken said in a statement Sunday night. “We stand with the people of Burma.”