rainy days and mondays🎵 by carpenters, I like this song🎵 songwriting- Paul williams , Roger nichols, harmonica- Tommy morgan, his harmonica makes me sad, karen, when I listen to this song, I remember your many singing voices, I wanted more pepople to have your beautiful singing voice, like this song, Far away ,back then~ 青春の輝き～ヴェリー・ベスト・オブ・カーペンターズ 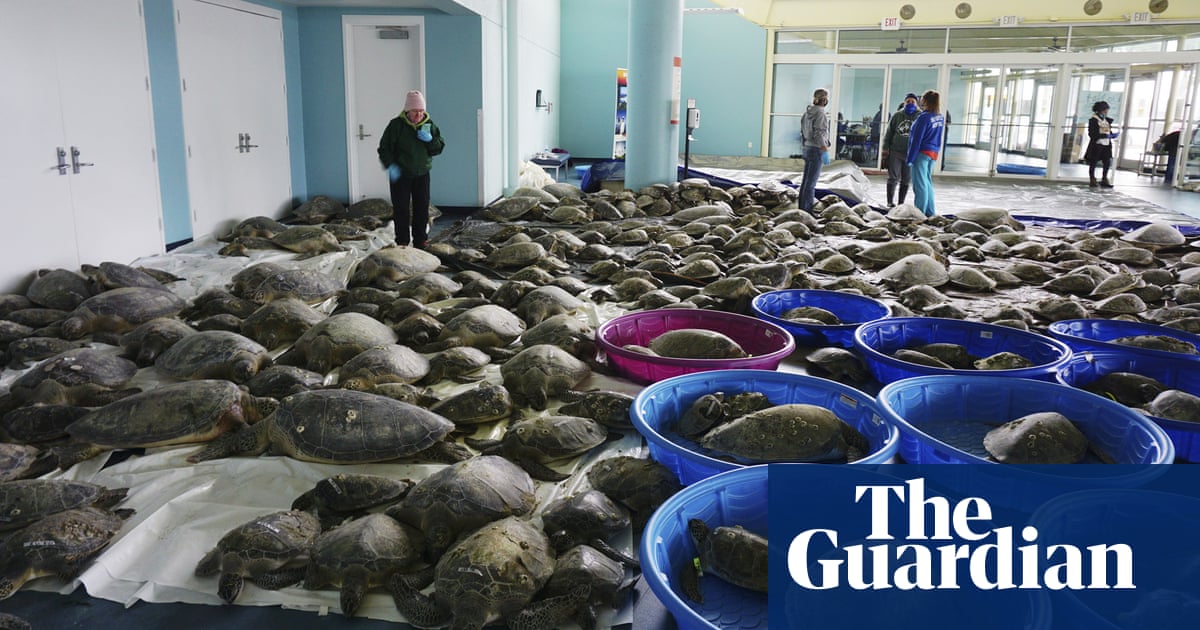 A convention center has come to aid these latest victims of severe winter weather: ‘We had trailers full yesterday that had 80, 100, 50’

Residents, some of whom lack heat or basic amenities in their own homes due to the unusually chilly weather, have been rescuing cold-stunned sea turtles and taking them to a convention center in a south Texas resort town.

“Every 15 minutes or less there’s another truck or SUV that pulls up,” said Ed Caum, executive director of the South Padre Island Convention and Visitors Bureau, to the Associated Press on Wednesday.

Notes:Hovering with a mouse cursor over a hyperlinked text or image in this post will bring up a tooltip showing descriptive information or instruction. 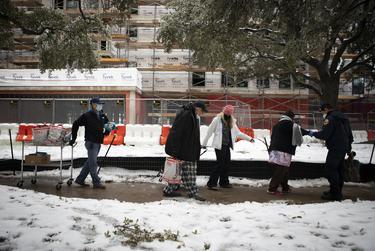 Resident of the Rebekah Baines Johnson Center were evacuated in Austin after the building lost power on Feb. 17, 2021.

More than 100 low-income older and disabled residents of an Austin high-rise apartment building were stranded without power and with dwindling food supplies for more than two days after the electricity went out and the property’s emergency generator shut down on Monday.

“Please help us, please,” Farah Rivera, 58, a resident of the Rebekah Baines Johnson Center in East Austin, said early Wednesday. “We need whatever help we can get.”

Help arrived a few hours later, as Austin firefighters evacuated residents who wanted to leave, carrying them down long flights of stairs in some cases, to CapMetro buses waiting to transporting them to a church shelter a few miles away, said Sergio Amaya, executive director and vice president of DMA Properties, which manages the site.

Shortly after the evacuation began, the emergency generator was restored and one elevator began working, speeding up their efforts to get people out of the freezing tower.

Residents bundled up in blankets and head scarves and layers of clothing, some using walkers and carrying red-and-white H-E-B grocery bags filled with belongings as they boarded buses or left with family.

“We are, right now, going floor to floor with the Austin Fire Department determining who wants to go to the warming center and helping us bring them down from their floors,” he said.

Millions of Texans were still without power on Wednesday, some of them for the third straight day, as the partial collapse of the state’s power system plunged them into darkness during a storm that saw inches of snow and ice and wind chills below zero.

Particularly hard hit are vulnerable residents, those that can’t leave their homes, or can’t afford hotels, or have otherwise limited resources and mounting medical needs.

Home to about 150 residents, the tower is run by the nonprofit Austin Geriatric Center to provide affordable housing to especially vulnerable populations.

The electricity at the tower has been off since before dawn on Monday, said Rivera, whose organization, the Serafina Food Pantry, operates on the first floor of the center.

The outage means the elevator was not operating in the 16-story building and only flashlights, headlamps and windows were providing light. The complex still has water but no way to heat it for showers or other needs because appliances are all electric.

“Everybody’s in the same boat, we understand,” Amaya said. “We’re just trying to get by and do what we can to make things as best we can here in these difficult times. Our staff has been here 24 hours a day, some of them aren’t going home at all.” 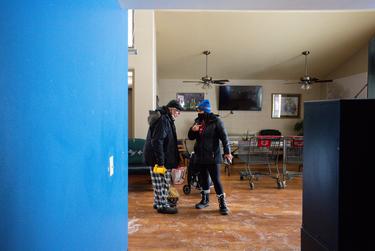 At the RBJ Center, staff and residents were looking for any signs of relief, with frigid temperatures inside the building, water pooling in hallways and the difficulty in evacuating disabled residents in electric wheelchairs down long flights of stairs.

The food pantry was out of non-perishable items to take to residents, many of whom seemed confused about the situation or worried about the outage, calling out to staffers from their rooms, asking about the darkness or wondering if Meals on Wheels would be arriving.

“It’s miserable. We’re so cold,” said resident Joyce Kelley, 69, who was trying to decide whether to go to a shelter because she was worried about the coronavirus.

Kelley has been dressing in layers, piling blankets on her bed, and eating canned food all week, she said.

“It’s a good thing that the hallway is a little warm so I can visit with my three other friends, otherwise it’s really so boring and depressing, you feel like crying,” she said. “But at least I’m not on the street. This apartment is cold but it’s not unbearable.”

Rivera said she spent the last two nights worrying about her neighbors in the building. She lives with her husband in an apartment there, she said, “so we have each other for support.” “It’s scary for them,” Rivera said. “There are people that are very impaired, and you think, ‘How are they spending the night? Who’s helping out, what’s going on? Are they still having a phone charged in case there’s an emergency? All that goes through your mind.” 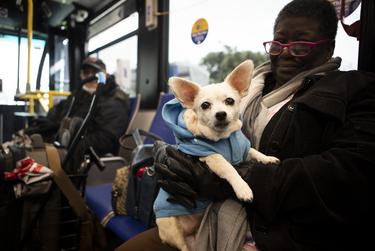 Margie Ray, 75, was evacuated from the Rebekah Baines Johnson Center in Austin after the building lost power on Feb. 17, 2021.

About four staffers who were able to get to work, along with volunteers from nearby neighborhoods, were running up and down flights of stairs to take food to residents and do welfare checks for worried families who are unable to get to their loved ones due to snow and ice, Amaya said.

Emergency responders have been called to bring at least one resident to the hospital after a fall in the darkness, Rivera said.

Amaya said his company believes the main generator failed because the diesel fuel powering it froze. He picked up a portable generator from another property and on Wednesday afternoon, workers could use it to warm up the main generator and restore the service of emergency lights and a single elevator.

“Which is great,” he said. “One elevator is better than nothing. But residents are still without heat.”

On Wednesday afternoon, Austin city officials offered hope for some areas with long-lasting outages, saying the Electric Reliability Council of Texas is allowing them to temporarily restore power to some parts of the city. They did not specify which areas but said circuits that had been out of power the longest would be the priority.

Rivera said the entire neighborhood around the tower, which is just east of I-35 in downtown Austin, is without power.

Disclosure: H-E-B has been a financial supporter of The Texas Tribune, a nonprofit, nonpartisan news organization that is funded in part by donations from members, foundations and corporate sponsors. Financial supporters play no role in the Tribune’s journalism. Find a complete list of them here.

A rhinestone shines just as good as a diamond. I’ve had to go against all kinds of people through the years just to be myself. I think everybody should be allowed to be who they are, and to love who they love. Everybody has their own journey, they have their own way of doing things. […]

Glass beads the size of blueberries found by archaeologists in a Brooks Range house pit might be the first European item ever to arrive in North America, predating the arrival of Columbus by a few decades.

Source: Blue beads in the tundra

A group of US experts in medicine, public health, and industrial health, penned a letter to White House officials, including Anthony Fauci, MD, and the director of the Centers for Disease Control and Prevention (CDC) asking them to fully address the inhalation, or airborne, nature of COVID-19 transmission and provide frontline workers with appropriate respirators and ventilation strategies to cut the infection risk.

The group said the United States must follow Germany, Austria, and France—countries that recently mandated respiratory protection equivalent to N95 filtering facepiece respirators (FFRs) and higher-quality filtration systems for all workers in public.

There were 240 fewer hospitalizations on Tuesday than there were the previous da.

California communities reported 11,236 new cases of the coronavirus on Tuesday, bringing the total number of cases to 3,478,579.

There were 388 new deaths reported Tuesday, for a total of 47,507 people in California who have died from the virus.