The general rule is that a person in the US has to be age 65 or older or classified as disabled by Social Security in order to receive health coverage from Medicare.

Well, that’s true for now, but it may change.

Medicare “Buy-in” programs already exist that allow states to make Medicare coverage available to people age 65 and over who cannot afford the monthly premium. Now there are bills in Congress to expand the buy-in concept.

For this to make sense, let’s review the basics of Medicare and Medicare costs.

I missed this last night:

It was nearly two weeks ago that Jill and I paid our respects to Capitol Police officer Brian Sicknick, who laid in honor in the Rotunda after losing his life protecting the Capitol from a riotous, violent mob on January 6, 2021.

Today, 57 Senators – including a record 7 Republicans – voted to find former President Trump guilty for inciting that deadly insurrection on our very democracy. The Senate vote followed the bipartisan vote to impeach him by the House of Representatives. While the final vote did not lead to a conviction, the substance of the charge is not in dispute. Even those opposed to the conviction, like Senate Minority Leader McConnell, believe Donald Trump was guilty of a “disgraceful dereliction of duty” and “practically and morally responsible for provoking” the violence unleashed on the Capitol.

Millions of people received stimulus payments and unemployment assistance last year — but they are treated differently for tax purposes.

Security forces fired guns to disperse protesters at a power plant in northern Myanmar on Sunday, as tanks and armored vehicles patrolled the streets of the country’s largest city and an overnight internet shutdown kicked in after days of nationwide mass protests against the two-week-old military junta.

The gunfire, livestreamed by protesters on Facebook, came after forces had turned a water cannon on hundreds of mostly young men who were chanting and beating oil drums outside a power plant in the Kachin state capital Myitkyina. The barrages lasted several minutes at a time, but it was not clear if the bullets were rubber or live ammunition or if any protesters were hurt.

A fire and power outage, as well as some shots fired by troops, were also reported in Thanlyin, a major port city near the commercial capital Yangon, by residents writing on Facebook. The accounts said army troops had surrounded a power station at Thanlyin, but that there were no clashes.

In recent days, peaceful demonstrations in the big cities of Yangon, Mandalay, and the capital Naypyidaw have topped six figures, and large crowds again turned out Sunday, the 14th day since the army arrested leader Aung San Suu Kyi, suspended parliament, and imposed a one-year period of emergency rule.

Signs emerged Sunday, however, that the junta is preparing a tougher crackdown on opponents of the Feb. 1 seizure of power by the army over claims that Aung San Suu Kyi’s ruling party’s landslide win in last November’s election was fraudulent.

Army tanks and armored vehicles were seen by RFA reporters Sunday night on the streets of Yangon, the country’s largest city.

After days of reports about a looming internet shutdown and continuing restrictions on access to Facebook and other social media, Myanmar’s telecoms firms on Sunday announced an eight-hour internet outage from 1 a.m. to 9 a.m. Monday

Ooredoo Myanmar informed mobile phone users that the junta has ordered an eight-hour internet clampdown, while Telenor Myanmar also announced that it was ordered to cut internet and data services.

Accounts of the impending Internet cut-off and of a steady stream of arrests of civil servants who joined protests were spreading widely on social media among broad community of junta opponents who call themselves the Civil Disobedience Movement.

Another development that pointed to a crackdown was the army’s reinstatement late on Saturday of a law requiring people to report overnight visitors to their homes, allowed security forces to detain suspects and search private property without court approval. The junta also ordered the arrest of well-known backers of mass protests.

Ambassadors to Myanmar from the EU, U.S., Britain, Canada and others on Sunday condemned the coup, the subsequent arrests, and the communications restrictions.

“We call on security forces to refrain from violence against demonstrators and civilians, who are protesting the overthrow of their legitimate government,” the envoys said in a joint statement.

The U.S. Embassy in Yangon warned Americans in the country to stay at home during nightly curfew hours.

“There are indications of military movements in Yangon and the possibility of telecommunications interruptions overnight between 1:00 a.m. and 9:00 a.m. U.S. citizens in Burma are advised to shelter-in-place during the 8:00 p.m. to 4:00 a.m. curfew hours,” it said on Twitter.

“The civil disobedience movement and demonstrations show that the people of Myanmar want democracy. We stand with them.”

After Sunday’s clash in Myitkyina, five Myanmar journalists were arrested by the army, including two who were broadcasting live coverage of the protests, the news outlets said.  Two journalists from 74 Media, and one each from Mizzima News, the Eternal Peace Network and Eleven Media are in custody, they said.

On Friday U.N. rights officials said they were tracking more than 350 politicians, state officials, activists, civil society members, journalists, monks, and students who have been taken into custody.

The Assistance Association of Political Prisoners (AAPP), a Myanmar watchdog group, said Sunday that, as of Feb. 12, 400 people have been arrested, of whom 25 were released.

Reported and translated by RFA’s Myanmar Service. Written in English by Paul Eckert. 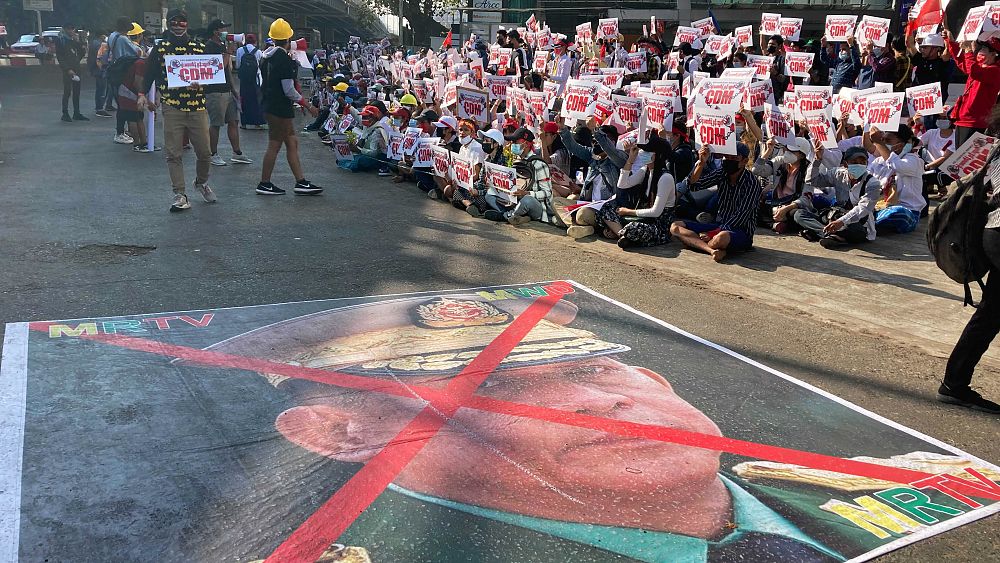 Western embassies in Myanmar have called on the military junta to refrain from violence, as another internet shutdown is imposed amid ongoing mass protests.

RIP In short stories like “The Immortals” and novels like “The Listeners,” Mr. Gunn helped prepare readers for the future.

Shots have been fired to disperse protesters, police have broke ranks to join demonstrations and the junta is searching for seven leading political activists as mass protests continued for a ninth day.