Sean Turnell, an Australian economic adviser to Myanmar’s Aung San Suu Kyi, has told the news agency Reuters that he is being detained, days after the Burmese leader was arrested in a military coup.

“I guess you will soon hear of it, but I am being detained,” he said. “Being charged with something, but not sure what. I am fine and strong, and not guilty of anything,” he said in a message, with a smile emoji. It was not subsequently possible to contact him.

According to his LinkedIn profile, which features a picture of him with Aung San Suu Kyi, Turnell is also a professor of economics at Sydney’s Macquarie University. It says he has been living in Myanmar’s capital, Naypyitaw, since December 2017 while serving as special economic consultant to the former leader. 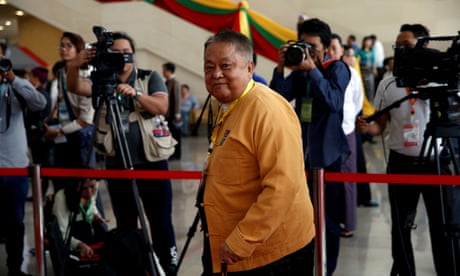 The news came as thousands of people took to the streets of Yangon on Saturday to denounce this week’s coup and demand the release of Aung San Suu Kyi, in the first such demonstration since the generals seized power on Monday.

“Military dictator, fail, fail; Democracy, win, win,” protesters chanted, calling for the military to free Nobel peace laureate Aung San Suu Kyi and other leaders of her National League for Democracy (NLD) who have been detained since the coup.