Alexey Navalny’s three and a half years sentence in a penal colony is supposed to be a punishment for having violated his parole conditions on a trumped-up conviction from 2014. He’s been found guilty of not reporting to Russian police on time in the weeks and months he was evacuated to Germany while in a coma after having been poisoned with the chemical nerve agent Novichok by the FSB, Russia’s secret intelligence service and the successor to the Soviet-era KGB.

The absurd sentence that has been handed down on Navalny suggests that Russia under Vladimir Putin is on an unstoppable path back to the old authoritarian ways of the Soviet Union, the country where  Putin began his career in the KGB.

This fact has become increasingly obvious for years, starting from the 2006 murder of prominent investigative journalist Anna Politkovskaya; the manipulation of the Russian Constitution after 2008, which helped cement Putin’s grip on power and made him the ruler of the country for all eternity; the imprisonment of the activists from Pussy Riot; the annexation of Crimea; the murder of former Deputy Prime Minister and democratic opposition leader Boris Nemtsov in 2015; the mysterious deaths of activists and the poisoning of leading opposition figures; the Novichok attack on former spy Sergey Skripal and his daughter in the UK; now the latest case involving Navalny.

Furthermore, more and more incontrovertible evidence of FSB hit squads involved in the killings of human rights activists have been uncovered, according to the investigative journalists at Bellingcat. 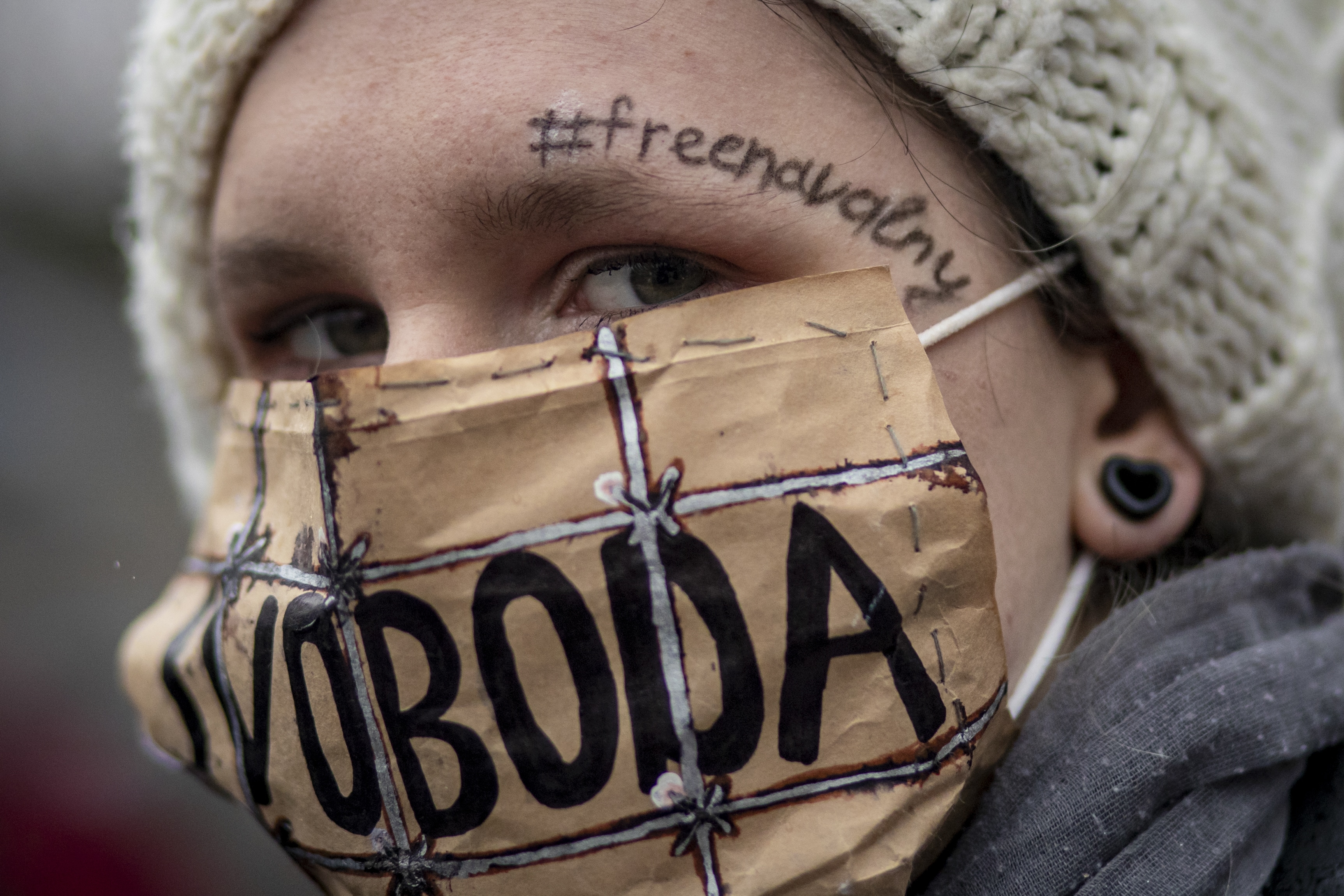 A woman takes part in a protest in support of Russian opposition leader Alexey Navalny in front of the Russian embassy in Prague, January 23, 2021. EPA-EFE//MARTIN DIVISEK

All of this is occurring at the same time when Russia’s biggest corruption scandal to date, Putin’s $1 billion “Palace on the Black Sea” has come to the public’s attention. 70 million Russians, roughly half of the population, have now watched the two-hour documentary. An unmistakable feeling of “enough is enough” is spreading throughout Russia as outraged citizens wave gilded toilet brushes at the recent round of anti-Putin protests in reference to those €700 brushes in the palace, with its nightclub and its own underground hockey stadium. Meanwhile, Russia’s pensioners struggle to pay their rent.

By imprisoning Navalny, Putin risks turning the opposition leader into a martyr – a Russian Nelson Mandela. Putin’s approval ratings have, nonetheless, been over 50 percent, due to the controlled state media. The two assassination attempts against Navalny, the arbitrary waves of arrests, and the exposure of insane levels of corruption have changed all of that. More people are now against Putin than they are for him. What is remarkable, however, is that despite an unbelievable wave of arrests and police brutality, people continue to demonstrate. Even drivers of passing trains and cars signal their solidarity by honking and signalling.

One of Putin’s pet projects, the Nord Stream II gas pipeline linking Russia to Europe via the Baltic Sea, can no longer, in any good conscience, be justified as eight people close to Putin now face sanctions following the Navalny ruling.

With each arrest, Putin becomes more like Erich Honecker – the longtime leader of East Germany, the same German Democratic Republic (GDR) where Putin served as a KGB officer in Dresden – in that he is rapidly approaching the abyss and initiating his own damnation. When Soviet President Mikhail Gorbachev opened the door to democracy and freedom in the Soviet Union, a first in Russia’s more than 1,000-year history, the old Soviet nomenklatura tried to undo it all in the botched August 1991 coup. By that time, average Soviet citizens had tasted the type of freedoms that they did not want to give up. The result was that they stood up to the tanks sent by the Communist hardliners with their bare hands and defended Moscow’s White House, the seat of the Russian parliament at the time.

The US, Germany, France and other countries have denounced Putin and Russia’s courts after the ruling on the Navalny case. Will the Russian people soon follow? As Navalny said in his fiery court speech: “You can’t lock up millions or hundreds of thousands of people. I very much hope that people will realize this. And they will.”