RIP…
For decades, Younis would drive over 90 minutes from his home in Arara, an Arab-Israeli town in northern Israel, five times a week to feed the cats and birds at the compound.

How can you determine what the cost of a student loan, or a mortgage, might be, in 20 years, and what might interest rates have to do with that?   What might the difference be between simple interest, compound interest, the prime rate, and other types of interest rates?  And why should we all care?  All […]

Day 49/67 of GED in Five Months, interest, and financial language learning — The 4 Freedoms for ALL via Language & Adult Education, Writing, and PublicDomainInfrastructure

Hi! Guys, I hope you are good and doing great. This is SUDARSHAN PALIWAL and welcome to my blog TOP 5 WORLD RECORDS

The lankiest canine in recorded history was Zeus, a great dane that measured 1.12 metres tall until his death.

“The world is a just a great big onion”, sang Marvin and Tammi Terrell. It’s a lyric that rings especially true in Leicestershire, where champion gardener Tony Glover’s eye- watering 8.5 kg beast could make an entire kitchen cry. It took more than one year to grow measures 81 cm.

3) MOST PRESS UPS IN ONE HOUR

The County of Los Angeles Public Health reported 6,492 new cases of the coronavirus on Wednesday, Jan. 20, increasing the cumulative total in the county to 1,038,092 cases since tracking began.

There were 262 deaths reported by the county on Wednesday, raising the total number of reported deaths to 14,384.

The data on deaths in the county is compiled from death certificates or gathered through the course of case investigations and can take weeks to process.

The county also reported 7,253 patients in local hospitals with the coronavirus on Wednesday. With 23% of those in ICUs.

The county’s breakdown of deaths by age is as follows:

As ICU capacity dwindles in Southern California the percentages in this graphic have been adjusted by state public health officials to represent the high levels of COVID-19 patients among all ICU patients. More actual beds may be available.

Vaccines administered as of Jan. 17

The California Department of Public Health site shows a total of 3,226,775 vaccine doses, which includes the first and second dose, have been shipped to local health departments and health care systems as of Jan. 17.

The totals of vaccines administered across six different regions are in the maps below. As of Jan. 17, a total of 1,393,224 vaccine doses have been administered statewide.That’s up 609,748 from the Jan. 11 report. The state cautions that the numbers do not represent true day-to-day change as reporting may be delayed.

Source: Arizona Republican’s brothers say he is ‘at least partially to blame’ for Capitol violence | TheHill 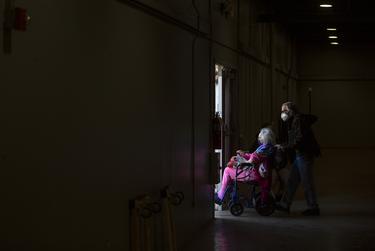 Many Dallas County seniors received their first dose of the COVID-19 vaccination site at Fair Park in Dallas.

Faced with the threat that the state might slash its vaccine allocation, Dallas officials on Wednesday reversed course on a plan that would have prioritized doses for people living in the county’s most vulnerable ZIP codes, primarily in communities of color.

A divided Dallas County Commissioners Court had voted Tuesday to prioritize vaccines at its Fair Park distribution center for individuals in mostly Black and Latino neighborhoods, a reflection of increased vulnerability to the coronavirus in 11 Dallas County ZIP codes, according to the Dallas Morning News.

In Texas and across the nation, communities of color have been hardest hit by the novel coronavirus, and health officials are grappling with how to ensure equity in the vaccine rollout. In Dallas, as in other major Texas cities, distribution sites are more commonly located in white neighborhoods, and early data showed the North Texas county had distributed most of its shots to residents of whiter, wealthier neighborhoods.

Dallas leaders tried to prioritize any residents who meet the state’s criteria for vaccination and live in one of the 11 ZIP codes, which are all completely or partially south of Interstate 30, a dividing line that splits the county along racial and socioeconomic lines, the Dallas Morning News reported this week.

But Texas health officials pushed back on the proposal, warning that it was “not acceptable to [the Department of State Health Services.]”

“While we ask hub providers to ensure vaccine reaches the hardest hit areas and populations, solely vaccinating people who live in those areas is not in line with the agreement to be a hub provider,” Imelda Garcia, an associate commissioner with DSHS, wrote to Dallas health officials in a letter obtained by The Texas Tribune. “If Dallas County is unable to meet these expectations, we will be forced to reduce the weekly vaccine allocation to Dallas County Health and Human Services and no longer consider it a hub provider.”

Garcia asked Dallas for an update on the vaccination plan by Thursday morning. Her letter came after County Judge Clay Jenkins wrote to state officials asking whether the county’s plan was permissible.

In an emergency meeting Wednesday evening, Jenkins successfully encouraged commissioners to reverse the plan. They could broach the issue again, he said, but for now they should axe the prioritization plan to ensure the county gets its next shipment from the state.

In a spirited and at times tense meeting, Commissioner J.J. Koch, who proposed the order in the first place, pushed to maintain language prioritizing the vulnerable ZIP codes and accused Jenkins of being “disingenuous.” Koch proposed tweaks to the order to meet the state’s specifications while still prioritizing the hard-hit communities.

“I’m not willing to risk the vaccine for tens of thousands of people over the next few weeks because you guess that your order is good enough to satisfy the state,” Jenkins said.

“I’m certain” that the order will be acceptable to state officials, Koch shot back.

“You got us in the situation we’re in tonight,” Jenkins replied. “The more you keep doing this, the more you’re hurting the people of Dallas County.”

Ultimately, the court voted to rescind the order — but agreed to meet again later this week to design a vaccination plan that will be “transparent and accountable,” as Koch put it.

“We’re all trying to get to the same place,” Jenkins said, trying to pacify the group.

“No, we’re not,” objected Commissioner John Wiley Price, who represents South Dallas and had raised concerns throughout the meeting that the county was not doing enough to serve vulnerable communities.

Dallas Mayor Eric Johnson declined to comment on the debate.

Her maternal grandfather was born in the village of Thulasendrapuram in the southern Indian state of Tamil Nadu more than 100 years ago, the Associated Press reported. Source: Photos of VP Kamala Harris’ inauguration being celebrated in India