Source: The Guy Who Built The World Wide Web Is Building A ‘New Internet’, Where You Control Your Data In the poll, 35.3% called for the cancellation of the Tokyo Games, while 44.8% said the games should be put off again.

Two Black officers who were working at the Capitol during the attack told Buzzfeed News that some of the insurgents they came face to face with were in fact off-duty cops:

“[One guy] pulled out his badge and he said, ‘we’re doing this for you.’ Another guy had his badge. So I was like, ‘well, you gotta be kidding.’”

Another officer, a newer recruit, echoed these sentiments, saying that where he was on the steps to the rotunda on the east side of the Capitol, he was engaged in hand-to-hand battles trying to fight the attackers off. But he said they were outnumbered 10 to one, and described extraordinary scenes in which protesters holding Blue Lives Matter flags launched themselves at police officers.

“We were telling them to back up and get away and stop, and they’re telling us, they are on our side, and they’re doing this for us, and they’re saying this as I’m getting punched in my face by one of them … That happened to a lot of us. We were getting pepper sprayed in the face by those protesters, I’m not going to even call them protestors, by those domestic terrorists,” said the officer.

Source: Cops From All Over the Country Were in D.C. During Coup Attempt

A self-described “hidden patriot” from Nashville, outed on social media as a rioter who invaded the U.S. Senate chambers Wednesday with a weapon and zip-tie handcuffs, was arrested Sunday on federal charges, NewsChannel 5 has learned.

FBI agents took Eric Gavelek Munchel, age 30, into custody on a federal arrest warrant charging him with one count of knowingly entering or remaining in any restricted building or grounds without lawful authority and one count of violent entry and disorderly conduct on Capitol grounds. He was booked into a Nashville jail at 2:50 p.m.

Criminal move by Trump leftovers – Saudi’s have been pursuing genocide in Yemen – we supplied arms and now this. 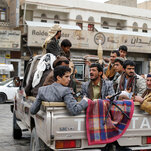 The State Department’s terrorist designation may be more symbolic than searing for the rebel movement, but it could aggravate Yemen’s human catastrophe.

An officer with Alberta Health Services said an inspection found that only two of approximately 75 attendees were wearing masks, the pastor and church staff were unmasked and rows in the auditorium were full, with people sitting side-by-side in rows less than two metres apart.  Source: Calgary pastor says church will continue to break COVID-19 rules, days after health order issued | CBC News

Source: Israeli settlers beat a 78-year-old Palestinian farmer with clubs. Then they came back to attack his family – Haaretz Com – Haaretz.com

Washington, D.C., Mayor Muriel Bowser (D) on Sunday called on the Department of Homeland Security (DHS) to take additional steps to secure the nation’s capital ahead of President-elect Joe Biden’s inauguration.In a…