A newly elected lawmaker from West Virginia was among the mob of Trump supporters who stormed the United States Capitol on Wednesday, filming as he stood among the crowd outside a door, rushed with them inside and then wandered through the halls along with the scores of others who had breached the building.

The lawmaker, Derrick Evans, posted the video to his Facebook page, where he goes by “Derrick Evans – The Activist” on Wednesday afternoon, but he later deleted it.

Mr. Evans, who was elected as a Republican state delegate in November, posted several videos from the events of the day, both narrating and joining in “Stop the Steal” chants with throngs of other Trump supporters. In the video that was deleted, he is among a crowd that shoved up against a door at the Capitol’s east front, some chanting and others loudly singing the national anthem. Those at the front appear to be trying to get inside, while Mr. Evans gives a running commentary on the attempts.

“We’re going in,” he says, at one point turning the camera to show himself wearing a helmet.

Suddenly the crowd moves quickly and the crowd rushes in, one woman screaming “We did it!” and Mr. Evans shouting “Derrick Evans is in the Capitol!” 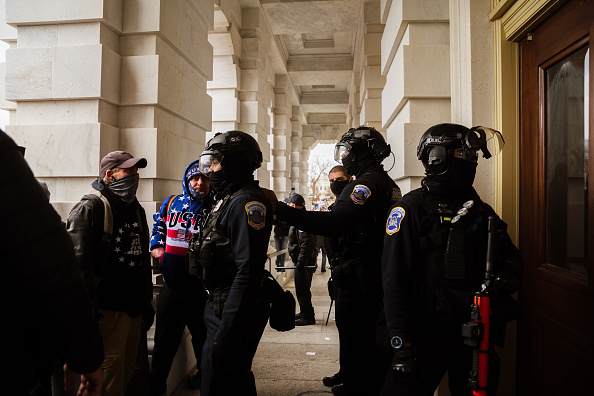 President Donald Trump called on the National Guard to help secure the US Capitol after a violent riot in DC on Wednesday.

California reported 44,253 new cases of coronavirus, bringing the total number of people who have been infected to 2,494,255, according to California public heath websites.

There were also 456 new deaths reported in California, bringing the total number of people who have died in the state to 27,466.

An additional 456 patients were admitted into California hospitals, making for 22,820 hospitalizations statewide.

Arizona has reached a new low: The state now has the highest infection rate of anywhere in the world, according to new data released this week. Over the past seven days, the state has seen a daily average of 118.3 new cases per 100,000 residents, well above countries like the Czech Republic (99.4) and the United Kingdom (86).

Staffers at the Utah state Capitol were ordered to evacuate the building, wrote Bryan Schott, who covers the legislature for the Salt Lake Tribune. In Georgia, police escorted Secretary of State Brad Raffensperger (R) to safety as militia members gathered outside the Capitol building in Atlanta.

Protesters at a rally in Salem burned Oregon Gov. Kate Brown (D) in effigy, as city police urged people to avoid the area around the statehouse. Fistfights broke out in Sacramento, where police struggled to contain clashes between dueling groups of demonstrators.

In Kansas, state police monitored a group of protesters who entered the statehouse in Topeka. The state Highway Patrol said they had no plans to increase security, according to the Topeka Capital-Journal. The protesters later dispersed without incident.

Peaceful protests urging the overthrow of President-elect Joe Biden’s win in November gathered in Austin, Texas. Protests were calm and controlled in Little Rock, Ark., though some Trump supporters showed up with automatic firearms and riot shields.

A year that is expected to turn misery and disease due to a virus, a year of hope and belief in a miracle will help humanity return to a life of security and health again, But the world does not heal by itself, we must all contribute to a whole world should feel good again, It’s like with love it must be constantly maintained and nothing we can take for granted, Give your love attention time encouragement, then we must also maintain our world, The world it can not stand how much misery and violence and In any case, in the end, the world also gives way. If we are to continue to enjoy life on our earth, we must all examine ourselves and be able to give back in order for humanity to appreciate what we have and enjoy all these opportunities we have.

Now it is a virus…

Senate Majority Leader Mitch McConnell (R-Ky.) warned against supporting efforts to challenge the Electoral College results, the first time he’s spoken publicly against the Trump-endorsed plan by members of his caucus to throw out President-elect Joe Biden’s win. McConnell’s remarks came at the start of the Senate’s first debate as part of what is expected to be an hours-long effort that will ultimately end in Congress affirming Biden’s win. McConnell, speaking from the Senate floor, said that the allegations of fraud didn’t reach the standard for challenging the election results and warned of dramatic consequences if the effort were successful. “If this election were overturned by mere allegations from the losing side, our democracy would enter a death spiral. We’d never see the whole nation accept the election again,” McConnell said.