Ugh. I hate today. My morning was a complete disaster. It has been super cold in the morning and very dry in our house. We have a space heater but I turned it off to combat the air dryness. I think I may add a bowl of water in my room so that it will evaporate and make the air a little more moist.

In the meantime, I wanted to talk about healing today. It is very tough to heal wounds that we’ve received from our parents and beyond. This year is a new year to better understand ourselves and our behaviors. It has been a reset for us to question our reality and the the systems we submit to daily. It is a year for personal growth and triumph when failure always seems to be knocking at our front door.

I only have the ability to control myself and…

Protesters who gathered outside the Virginia home of Republican Sen. Josh Hawley on Monday evening were peaceful and they left when police explained they were violating local picketing laws, police said Tuesday. The Missouri senator on Twitter accused the protesters of vandalism and threatening his family. Hawley is among a dozen members of the U.S. Senate expected to object to certification of the Electoral College votes.

China has blocked the arrival of a team from the World Health Organization investigating the origins of the coronavirus pandemic, claiming that their visas had not yet been approved even as some members of the group were on their way.

The WHO’s director general, Tedros Adhanom Ghebreyesus, expressed his dismay and said he had called on China to allow the team in. “I’m very disappointed with this news, given that two members have already begun their journeys, and others were not able to travel at the last minute,” he said.

“But I have been in contact with senior Chinese officials. And I have once again made made it clear that the mission is a priority for WHO and the international team.”

do anything to demean women and their health services Texas! 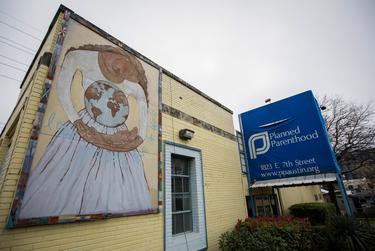 The exterior of Planned Parenthood’s Downtown Austin Health Center on Jan. 14, 2020. The location was being renovated at time of capture.

Thousands of low-income Medicaid recipients who rely on Planned Parenthood for non-abortion services like cancer screenings and birth control will have until Feb. 3 to find new health care providers, according to a letter sent from the state’s Health and Human Services Commission to the women’s health provider Monday.

The extension comes after the conservative U.S. 5th Circuit Court of Appeals in November sided with Texas officials who have long tried to block Planned Parenthood from participating in Medicaid, the federal-state health insurance program for the poor and disabled. To qualify, a single woman in Texas with two children must make less than $230 a month.

After the court’s ruling, Planned Parenthood asked state officials to delay booting the string of women’s health providers for at least six months to give the organization time to find medical coverage for its more than 8,000 Medicaid patients, many of whom are women of color. Texas has a shortage of Medicaid providers in part because of the low reimbursement rates, the organization said.

“The people who rely on Medicaid are the most vulnerable Texans and likely experiencing some of the worst economic effects of the pandemic,” Jeffrey Hons, president and chief executive of Planned Parenthood South Texas, said at the time. “Forcing people — many of whom are struggling to make ends meet and care for their families in a global pandemic — to scramble for basic health care is terrible policy, certainly uncharitable, indeed un-American.”

The health commission denied Planned Parenthood’s request to stay in the Medicaid program, citing the court’s decision. Instead, it granted a “30-day grace period … to ensure that current Medicaid clients receiving services at your clinics can be transitioned to new providers.” The organization cannot accept new Medicaid patients, the letter said.

The court case stemmed from a debunked video released in 2015 that suggested abortion providers at Planned Parenthood sold fetal tissue for profit. Investigations of the video, made by anti-abortion advocates, were unable to verify its claims, but its release sparked outrage from the state’s Republican leadership, including Gov. Greg Abbott. Planned Parenthood has donated fetal tissue for research, which is legal.

In November, after the 5th Circuit’s ruling, Attorney General Ken Paxton said the actions in the video amounted to “morally bankrupt and unlawful conduct” and that Planned Parenthood was not a “‘qualified’ provider.”

A lower court had blocked the state from removing Planned Parenthood from Medicaid in 2017.

Disclosure: Planned Parenthood has been a financial supporter of The Texas Tribune, a nonprofit, nonpartisan news organization that is funded in part by donations from members, foundations and corporate sponsors. Financial supporters play no role in the Tribune’s journalism. Find a complete list of them here.

The county has reported more than 1,000 deaths since Dec. 30, according to health officials, including 224 on Tuesday.

L.A. County is a national epicenter of COVID, but the problem extends across many other parts of California. After a relative New Year’s lull, the state on Monday reported its highest number of new coronavirus cases in a single day, more than 74,000, according to a Times tally of local health jurisdictions.

The number of new daily confirmed cases of coronavirus in the UK has topped 60,000 for the first time since the pandemic started. Source: Covid-19: UK daily coronavirus cases top 60,000 for first time – BBC News

Students across Ontario are engaged in virtual learning from home this week, but two Toronto-area doctors say schools should not reopen for in-person learning so soon.

Source: ‘We’re not in a lockdown when schools are open,’ Toronto-area doctors warn – Toronto | Globalnews.ca

The Villages Group: Cooperation in Israel-Palestine

The way to al-Ahali hospital in Hebron passes blocked and chaotic streets somewhat reminiscent of southern Tel Aviv. Inside – a hospital like any in the world, long corridors and many people worried and waiting, waiting worried.

Harun’s father and uncle are waiting tool. They both have bright blue eyes like Harun’s, who is lying ventilated in an Intensive Care Unit since an Israeli soldier shot him in the neck without any reason, last Friday.

For fear of Covid-19 we were not allowed to approach him, and only watched him – connected to machines and tubes – from the doorway. He seemed asleep, until he suddenly opened a pair of huge eyes and stared for a long time at the ceiling. That’s the only place he can look at. The bullet severed his spinal cord between vertebrae C6 and C7. He cannot turn his head or look anywhere else…