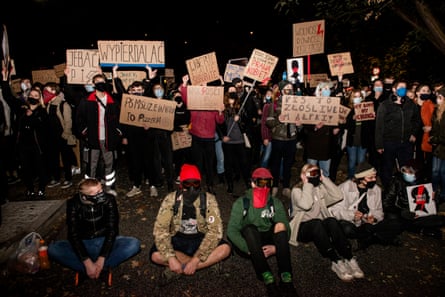 “It certainly feels different,” said Adam Mrozowicki, a sociologist at the University of Wrocław. “We need to study it properly, but the heart of this does seem to be young people. Anecdotally, I’ve never seen this level of engagement among my students – in my faculty, maybe 70-80% of students have taken part in some kind of protest.”

The scale and nature of the protests was new, Mrozowicki said: “They are led by young women. This is decentralised, locally based, grassroots. And personally, in 20 years, I’ve never seen anything like these numbers. To have 65,000 people on the streets of Wrocław …”

Ben Stanley, a political scientist at the SWPS university in Warsaw, said the protests felt “qualitatively different”. Previous anti-PiS demonstrations over the rule of law mainly drew “Solidarność-era protesters, people in their 50s and 60s. It wasn’t an issue that resonated so much with young people.”

Source: ‘A backlash against a patriarchal culture’: How Polish protests go beyond abortion rights | Poland | The Guardian