When he was running for president of Ukraine in 2019, Volodymyr Zelensky did not have a traditional political program. Instead, he devised catchy slogans. One of them was “The spring will come, and we will plant them in the prisons”. This was the former comedian’s appeal to his fellow-citizens, all of whom were tired of widespread corruption. This was also a sharp-tongued teasing of his predecessor and rival Petro Poroshenko, whom Zelensky defeated in the second round of the presidential election just 17 months ago.

While in office, Zelensky did not fulfil his catchy promise. Hardly any anti-corruption case has prosecuted thus far. Despite having a majority in the Verkhovna Rada, the Ukrainian parliament, as well as full control over the prosecution and the SBU, the national security service, Zelensky and his team have done demonstratively little during their time in power.

On October 25, Ukrainian voters during the first round of mayoral and local elections responded with a resounding vote to penalize Zelensky and his party, the Servant of People, for not keeping last year’s promise. The party and Zelensky’s hand-picked mayoral candidates did disastrously. The paradox is that the Ukrainian people largely voted for parties of the same leaders who have epitomized the corrosive form of post-Soviet corruption that has crippled the country’s growth since it gained independence in 1991.

The biggest winners of the local elections include the Opposition Platform, the pro-Russian group that has openly opposed the EuroMaidan Revolution of 2014, and which is led today by Viktor Medvedchuk, an oligarch as well as a close confidant of Russian President Vladimir Putin and the godfather to one of Putin’s daughters; European Solidarity, led by former President Petro Poroshenko; Fatherland, led by Yulia Tymoshenko; and For Future, the most recent project of oligarch Igor Kolomoisky. Each of them should be familiar to those who have followed Ukrainian politics for the last 30 years, as well as the national and international journalists’ anti-corruption investigations.

The local elections sent shockwaves through the Ukrainian leadership. To be fair, the Servant of the People party may get the most deputies across the board of diverse municipal and regional assemblies, but this will not be enough for them to govern or make much of a difference. Importantly and depressingly for Zelensky, his party does not seem like it will be the governing party in Ukraine’s major cities of Kyiv, Odessa, Kharkiv, Dnipro and Lviv.

As the votes have not been announced yet, the Servant of the People will probably fail to be represented in three regional assemblies. In the meantime, Poroshenko got the final word on Zelensky back by having his party win big in Kyiv, the capital, as well as in the western part of the country, while also being represented in all of the regional assemblies nationwide.

There is also a major concern for Zelensky that the pro-Russian party has become far stronger in the south-east of the country and one of its leaders came in second in the mayoral elections in Kyiv, which was ground zero for the pro-Western revolution just six years ago.

Zelensky knew that some of his MPs in the parliament were not popular and that this was dragging down the reputation of his party both nationally and locally. The elections should indicate to him that his teasers are no longer doing the trick and his own popularity is fading quickly.

Although there are some in his party who argue that Zelensky’s voters are still there – they just did not bother to show up this time. The party-loyalists point to the fact that there just 36% of the electorate voted this time – a 10% drop from five years ago. In addition, their average age was around 57 years old, which is far above the average of Zelensky’s voters.

Despite all of this, Zelensky should view this as a warning sign. The less meaningful wins in the rural areas do not necessarily reflect popular preferences and may be a sign of local inertia powered by the traditional support given to a governing party. The instances where in big cities and regions Zelensky has put his own political capital behind several mayoral candidates by handpicking them and campaigning with them, is even more telling. These people all came up empty. No one for whom Zelensky actively campaigned in the mayoral elections won or got into the second round.

Zelensky may still expect that three candidates from his party could qualify for the second round of the mayoral elections in cities of Poltava, Zhitomir and Uzhgorod. In contrast, the nationalist Svoboda (Freedom) party secured three mayoral positions in the first round in the western Ukrainian cities of Ternopil, Ivano-Frankivsk and Khmelnitsky. Under Ukrainian law, mayors are quite independent in setting the local agenda and managing their budgets. This means that none of Zelensky’s people will be in a position to do so in any major city.

Zelensky is trying to find those responsible and there is a lot of finger-pointing in his immediate circles. The heads of several state regional administrations appointed by Zelensky in Odessa, Dnipro and Kharkiv will probably be fired soon. This depends on the final results, as Zelensky is probably also waiting to understand whether these individuals may be of help to him or will rather become his liability when trying to join the local alliances.

Having won the absolute majority in the general elections last year and over 73% in the presidential election, Zelensky did not have to worry much about alliances.  Now he will be lucky if his Servant of the People party is invited to join some of those on the local level. His dancing partners most of the time will be the very same people he was promising to throw in prison. 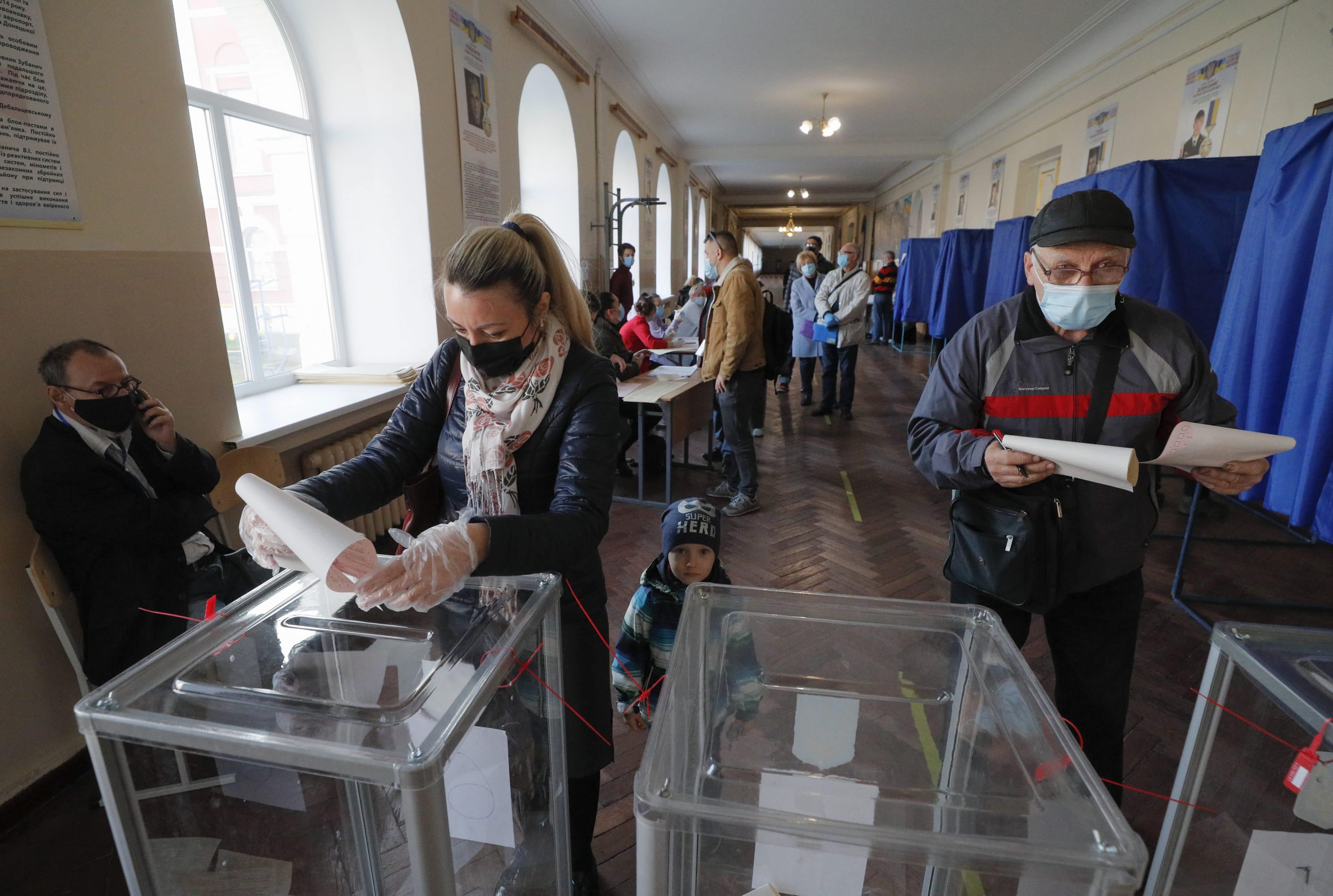 People cast their ballots at a polling station during Ukraine’s local elections in Kyiv. EPA-EFE//SERGEY DOLZHENKO

According to Ukrainian law, unlike in the parliament, on the local level, no coalition is required in a municipal or regional assembly. Once the final results are announced, there will be no formal coalition talks. Yet, the alliances will be formed and will serve as the core of power-sharing on the local level.

Historically, in the big cities, this has been built around a local party led by a city mayor. The mayor of Odessa, Gennady Trukhanov, for example, with alleged connections to organized crime, has been governing the city of one million by relying on his local pet party project. Most recently he was getting the support of then-President Poroshenko’s national party fraction in the city assembly. Trukhanov is still likely to stay unless he is defeated by Mykola Skorik, the candidate from the pro-Russian party, whom he will meet in the second round. Oleg Filimonov, Zelensky’s mayoral candidate in Odessa and also a comedian, came in a lowly fourth.

Some similar local party-projects and arrangements have been flourishing in other Ukrainian cities, such as Kharkiv, Dnipro and even Kyiv, where Vitaly Klitschko is likely to remain the mayor. He will rely on his own Udar party, which just as all other local parties is nationally insignificant. But this time, he will need help from outside and it is not yet certain that the new power-sharing in the Ukrainian capital will include the Servant of the People, which received a dismal 12 seats out of 120 in the Kyiv assembly.

Many decisions on the local level depend on situational alliances, as the dynamic is often less political than in the parliament. After these elections in many big cities,  there may be a need for mayors to build alliances with three or more other parties. This is expected to complicate the local consensus-building.

After the regional elections, consensus-building on the national level is a far more complex task that Zelensky will still need to handle. There was hope that after the Maidan Revolution that an elite consensus would emerge in Ukraine on such issues as state-building, territorial integrity, federalism, and foreign policy with no debate on the question of state and nation-building. Only the tiny extreme nationalist parties opposed the definition of Ukraine as an inclusive civic state and only the weakened pro-Russian parties campaigned for building strong relationships with Russia and the federalization of Ukraine.

The October 25 election may be seen as a demonstration that Ukrainian voters are still divided on these important issues. Beyond the catchy slogans and teasers, it is still far from clear how to bring this young and politically diverse nation together in a modern, egalitarian state governed by law.