The mayor of a small town in Tennessee that hosts the Bonnaroo Music and Arts Festival died Monday of Covid-19, officials said. He was 79. Source: Mayor of Tennessee city that hosts Bonnaroo dies of Covid-19 at 79

While working for an eco-friendly oven for a school project when she was in grade 10, Maria Yzabell Angel Palma stumbled on the idea of making an airconditioner that does not use ozone-depleting coolants. Two years later, the AirDisc was born and she became known far and wide. Source: Filipino Invention: Eco-friendly Airconditioner called AirDisc 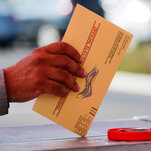 Government officials say the receptacles are illegal and could lead to voter fraud, but the party says it will continue the practice.

A video of a white man having a bitch fit and ripping a Black Lives Matter flag off a pole of someone else’s house went viral over the weekend.

The study from journalists at the Brown Institute for Media Innovation and the Midwest Center for Investigative Reporting published in USA Today indicates that individual clusters of coronavirus infections are primarily responsible for the latest wave of new COVID-19 cases vexing public health officials in the state, with several outbreaks occurring at correctional facilities and a major military base. The second-largest outbreak identified by the study, which until now has not been reported to news organizations, is occurring at the Great Lakes Naval Base in Lake County, Ill., where 228 new cases of COVID-19 have been identified over the past month according to confidential data recorded by Illinois officials and obtained by the study.

Outbreaks of coronavirus in schools, workplaces and other facilities are driving the surge of new COVID-19 cases in Illinois, some of which have not been publicly identified, according to a new study.The study from…

A high-speed mail sorting machine in Maine previously ordered disassembled as part of Postmaster Louis DeJoy’s operational changes at the Postal Service this year went back into service last week.Workers at the Sou…

Prof Calum Semple, who was at the Sage meeting on 21 September, said the three tier system had come too late and he believes that a short national lockdown could be needed within weeks.

Test and Trace is at the heart of the government’s plans – a way of avoiding the need for a national lockdown by targeting restrictions where the virus is.

Sage says “this system is having a marginal impact on transmission” and that unless it’s resources grow faster than the epidemic then Test and Trace “will further decline in the future”.

The documents say a two-week circuit break in October could drive cases down, essentially rewinding the clock by 28 days. This could buy time for Test and Trace to catch up.

Source: Covid-19: Are we still listening to the science? – BBC News