As activists mobilized against the bill, police targeted them 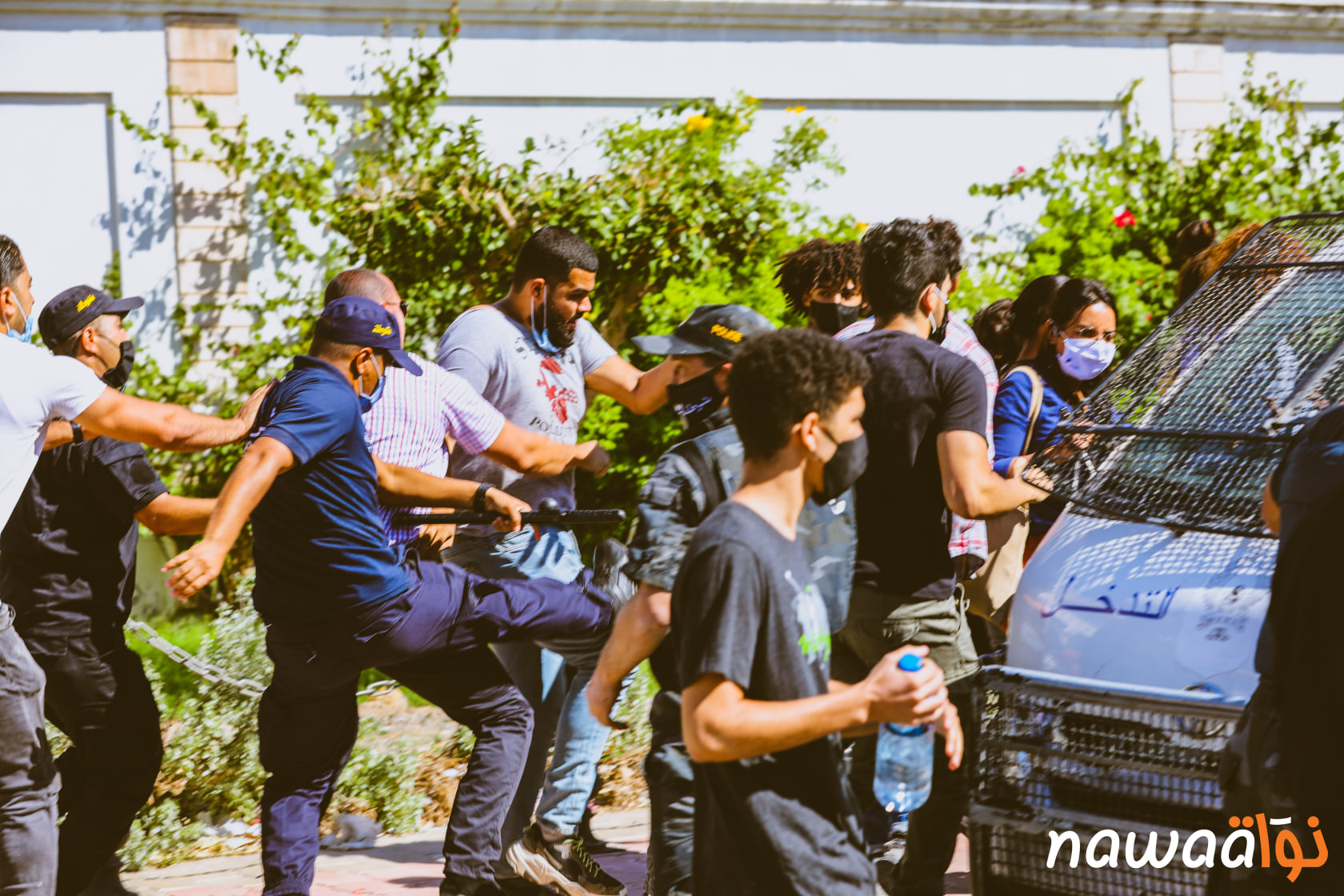 A police officer kicks a protester during a demonstration against the police protection bill on October 6. Image credit: Nawaat, used with permission.

As the Tunisian parliament considers a controversial police protection bill, protests erupted in the city of Bardo to oppose it. On October 6 and 8, human rights groups and a youth-led citizen movement dubbed Hasebhom (translated as “hold them to account”) rallied outside the parliament building against the bill, which, if adopted, would legalize impunity for security forces by granting them immunity from prosecution for their use of unnecessary lethal force.

The Tunisia parliament’s decision to hold a plenary session to discuss the bill —weeks before the 10th anniversary of the revolution that toppled the Ben Ali dictatorship— was met with criticism from human rights groups and activists who have been opposing the bill since it was first submitted to the parliament in 2015.

As activists mobilized against the bill, police targeted them on- and offline. These attacks on freedom of demonstration and speech are alarming and confirm the concerns of human rights organizations that serious rights violations and persisting gaps in legal protections of rights threaten Tunisia’s strides in protecting human rights since the revolution of 2011.

In the meantime, the parliament announced on October 8 that it will delay discussion on the bill, while activists remain determined to have it completely withdrawn.

A ‘threat’ to rights and freedoms

The latest version of the draft law No.25/2015 on the Prosecution of Abuses Against the Armed Forces presents a number of improvements compared to the initial version, submitted to parliament on April 13, 2015. For example, this earlier version envisaged criminal penalties against speech deemed “denigrating” toward the police.

Yet, changes introduced to this recent version have not appeased the concerns of human rights organizations.

On October 6, more than 20 civil society organizations signed a joint statement and launched a campaign dubbed “An Alarming Parliamentary Return,” urging the parliament to reject the police protection bill, along with other bills raising rights concerns, including a state of emergency draft law and draft amendments to the decree regulating broadcast media. According to the statement, the police protection bill “continues to pose a threat to the rights and freedoms of all citizens, despite the amendments that have been included.”

The proposed law violates Article 21 of the Tunisian constitution of 2014, which states that “all citizens are equal before the law without any discrimination.” Article 7 of the proposed law, which grants security forces immunity from prosecution for the use of excessive and lethal force against citizens in situations deemed “dangerous,” is contrary to Tunisia’s international human rights commitments — particularly with regard to respect of the right to life and the fight against impunity.

In a statement by Amnesty International, deputy regional director for the Middle East and North Africa, Emna Guellali said:

Time and time again, Tunisian and international civil society organizations have fought against this bill, warning of the detrimental impact it would have on the rule of law. If adopted, this draft law would reinforce the culture of impunity and send an alarming message to the security forces that they have the green light to use force as they see fit without worrying about being held accountable.

Security forces unions cite the rising threat of terrorism in post-revolutionary Tunisia to pressure parliament to adopt the bill. Yet, there are numerous laws and decrees that regulate or protect security work and severely punish criminal acts that target security forces.


During the October 6 protest, demonstrators raised signs and slogans against police brutality and impunity, while members of LGBT groups, Damj and Outcasts, were present to denounce police violence against LGBTQI+ individuals.

Footage and testimonies shared by citizen journalists and independent citizen media Nawaat showed police physically assaulting protesters. Four were detained in the Bardo police station for three hours and were denied access to lawyers — a blatant violation of their rights under Tunisia law. Some deputies who joined the demonstrators were also assaulted, including Yassine Ayari, who talked about the assault to a local radio program.

Global Voices spoke with one of the detained activists, Asrar Ben Jouira, a Hasebhom campaign coordinator and member of the Tunisian Human Rights League. Jouira said that she herself was subjected to and also witnessed verbal and physical assaults by police — both uniformed and undercover. She said that a police officer sexually harassed by touching her breasts and also harassed other female demonstrators, by touching their buttocks and verbally abusing them. She also reported that police officers used their personal mobile phones to film her and the other demonstrators, despite the presence of the technical police that used professional cameras.

When she heard that two activists were detained, she went to Bardo police station to check on them and to make sure they had lawyers. She was lured inside the police station by an officer who led her to believe she could check on the activists, but quickly closed the door and informed her that she would also be detained for “rioting,” explaining that her face had been spotted in a video filmed during the protest.

Another police officer showed her on his phone a post on the Hasebhom Facebook page that translates the draft law from legalese standard Arabic to the Tunisian dialect, telling her: “We know you wrote this.”

Asrar and the other detainees were only released after the intervention of a number of deputies.

Activists targeted for their online views

In a Facebook live stream organized on October 6, Al Bawsala and other civil society organizations to denounce draft laws that threaten human rights, Yosra Frawes of the Tunisian Association of Democratic Women (ATFD) denounced police unions for their “illegal practices” such as “organizing coordinated harassment campaigns on social media against citizens and discriminatory speech based on gender identity.”

On October 7, Activist Myriam Bribri received a summons from police based on her social media posts critical of the draft law. A public prosecutor later charged her with “insulting others through social media.” She remains free as she awaits trial on December 14. Bribri was also subjected to attacks on social media. In a statement supporting the activist, the Tunisian Forum for Economic and Social Rights (FTDES) said:

This summons comes after she was systematically harassed whether through her page on social media or threatening phone calls coming from personal and administrative phone numbers of police union members.

The abuse of power by police and security forces remains undoubtedly a serious problem in Tunisia, particular as it remains under a continuous state of emergency since November 2015, a period marked by criminal prosecutions for peaceful speech online and offline, attacks against journalists, arbitrary arrests by the police, and numerous cases of police brutality and torture.


As Hasebhom organized the second round of protests on October 8, the parliament ended its plenary session without discussing the bill, postponing its adoption to an undetermined date as was the case in 2017.

Activists celebrated this small win but are not taking a break from their persistent fight until the bill is withdrawn or rejected. While civil society continues the fight against the police protection bill, Tunisian authorities must respect the right to peaceful protest and avoid arbitrary detention even under this everlasting state of emergency.