According to Texas Restaurant Association president and chief executive Emily Williams Knight, 15% of Texas’ 50,000 restaurants have already closed their doors permanently. With no stimulus plan, another 10% could close before the year ends, she said.

She’s received countless calls from restaurant owners in tears because, after pouring years into their dream business, they had to shut down everything.

“It felt like a gut punch that the potential relief is officially done,” said Knight. “Eight weeks of help for a seven month problem seems incredibly unreasonable.” 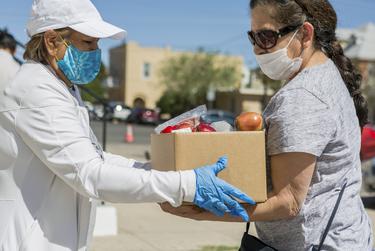 Lines wrapped around the block of the Kelly Memorial Food Pantry in El Paso in April. Many Texans blame both major political parties for a protracted fight over a new coronavirus relief package.

Jacque Miles is three weeks away from losing everything — her home, her utilities and even the cellphone service she relies on to apply for five to six jobs a day.

The 54-year-old Myra resident was let go from her job at a merchandising agency in April and, like millions of Texans, has been watching Congress to see if it’ll pass another federal relief package to help her make ends meet during the pandemic and its parallel economic recession.

But federal lawmakers and President Donald Trump have failed for months during a heated election year to reach a deal on a bill that could provide millions of Texans with a second $1,200 stimulus check, additional unemployment benefits and more loans for small business owners hanging on by a thread.

“They all get to go home to their nice big house and eat their nice big meal,” Miles said of the federal officials and lawmakers who have been working on a deal. “And I’m eating macaroni and cheese for the 10th time this week. How can that be happening?”

It’s been a dizzying few days for Texans waiting to see if more assistance will come. Trump deflated hopes that an agreement would be reached soon when he tweeted Tuesday that he’d told his negotiators to halt discussions until after the Nov. 3 election. Later that evening, he seemingly walked back that request, calling for stand-alone bills funding specific programs, which U.S House Speaker Nancy Pelosi signaled she would not support.

Then on Thursday, according to media reports, Trump said talks had resumed. And Pelosi’s chief of staff said she and Treasury Secretary Steven Mnuchin discussed the prospects of reaching an agreement on a comprehensive bill.

But it is unclear if anything will pass soon, leaving struggling Texans to continue to scrape by with no end in sight.

Miles likened the ever-changing developments to an “exhausting” tennis match.

As families struggle to keep their water running and business owners pull in heavy losses, Texans are “heartbroken” and angry with the federal government’s lack of support.

Workers and business owners said they feel like those in charge are playing games with their livelihoods and are out of touch with the people they represent at the same time that many of them are seeking their votes.

The prospects of a deal after the expiration of the CARES Act at the end of July has been a political football for months. Democrats have proposed a $2.2 trillion dollar package, which would bring back an additional $600 in weekly unemployment payments, according to media reports. The White House has countered with a $1.6 trillion dollar plan with $400 in extra weekly unemployment, though it’s unclear congressional Republicans would pass such a bill.

Both sides appear to agree on sending out another round of $1,200 stimulus checks, which were first sent to people making $75,000 or less this spring.

Further delay of any federal deal could also shutter more businesses, lead to evictions and cause permanent job losses for millions, according to various industry leaders. With reduced indoor capacity, economic hardships hitting their customers and colder weather soon threatening outdoor dining, no additional stimulus deal could be catastrophic for restaurants.

According to Texas Restaurant Association president and chief executive Emily Williams Knight, 15% of Texas’ 50,000 restaurants have already closed their doors permanently. With no stimulus plan, another 10% could close before the year ends, she said.

She’s received countless calls from restaurant owners in tears because, after pouring years into their dream business, they had to shut down everything.

“It felt like a gut punch that the potential relief is officially done,” said Knight. “Eight weeks of help for a seven month problem seems incredibly unreasonable.”

“No time to be playing political games”

J.R. Gonzales, a top executive at the Texas Association of Mexican American Chambers of Commerce, said the lack of federal support has hit Hispanic Texans – who have disproportionately contracted and died from the virus — particularly hard.

“The back and forth to me is just political jockeying and a waste of time,” he said, adding that he holds elected officials of both parties responsible for this failure, a sentiment held by most Texans who spoke to The Texas Tribune about a potential new relief package.

Gonzales said the Hispanic community he represents has a large number of small business owners, some of whom are struggling to stay open. Many of their customers are out of work or risk their lives to fill essential jobs.

“This is no time to be playing political games,” Gonzales said. “Hispanic business owners and workers need these grants to put food on the table.”

One such business is Beijing Bistro, which Janette Martinez, 25, took over from her father, Eddie, when he had a stroke in April. With $250,000 in medical bills — Eddie does not have insurance — on top of the challenges of running the restaurant in Buda, Martinez feels like she’s drinking water from a fire hose.

She’s never run a business before and paused her plans to return to college and study business management to schedule shifts for cooks, manage the books and keep the family business afloat. The $80,000 she received from the Paycheck Protection Program loans, which are now dwindling, allowed her to pay all her staff.

Still, Martinez has no idea if she’s breaking even or losing money, and works every hour the restaurant is open six days a week. On her birthday next week, her biggest wish for a celebration is just to get a day off. And see her dad.

“We’re all just trying to survive as best we can out here,” she said. “The longer they take choosing whether or not to pass the stimulus, the more dire the situation will become.”

She, too, holds both parties responsible for failing to pass a plan.

Washington’s inaction has made restaurant owners feel like they don’t matter, Knight said.

“It was a lot of theatrics so they could go back to their constituents and demonstrate that they acted and it was someone else’s fault,” she said.

Many of the issues restaurants face extend to industries across the state.

Ebele Iloanye, the owner of the retail store MODChic Couture in Sugar Land, has lost 70% in revenue over the last few months of the pandemic. Though she’s kept up with her rent for now, largely with the help of her $11,000 PPP loan, she’s cut many of her employees.

A second stimulus package would ensure she could continue to pay her rent — and bring back the workers she’s been unable to pay for months. That would mean they could then pay their bills as well.

“Things are bad all around, everybody can see it and we’re just trying to survive,” Iloanye said. “We’re doing our part, and I really hope that they would now do theirs.”

Iloanye did not cast blame on Trump specifically — though his tweets were the most recent example of what many consider political posturing — but said that all Washington politicians are to blame for this failure to do the job they were elected to do. Eddie Aldrete, the national affairs committee chair of the Texas Association of Business, agreed.

“Texas businesses are doing their best to weather this pandemic and help our state and nation recover,” he said. “We can’t do it alone, and we are hopeful that leaders in Washington can finally, for once, find common ground to provide a stimulus and relief package.”

Miles said she just wants a reprieve. While she voted for Trump in 2016, she feels like neither party is willing to bend and offer people help. After more than seven months of seeing disaster everywhere she looks, she’s struggling to stay optimistic.

“It’s hard to find a happy spot,” she said. “It gets harder every day.”

Disclosure: Texas Association of Business has been a financial supporter of The Texas Tribune, a nonprofit, nonpartisan news organization that is funded in part by donations from members, foundations and corporate sponsors. Financial supporters play no role in the Tribune’s journalism. Find a complete list of them here.