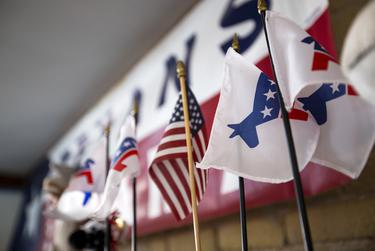 The Texas House Democratic Campaign Committee raised $3.6 million between July 1 and Sept. 24, which is more than double the $1.6 million that the committee raised in the first six months of the year.

The Texas House Democratic Campaign Committee has raised over $3.6 million in just under three months, a massive cash infusion as the party pushes to take control of the lower chamber for the first time since 2002.

The $3.6 million haul, which came between July 1 and Sept. 24, is more than double the $1.6 million that the committee raised in the first six months of the year. That in itself was a committee record at the time, exceeding its total fundraising for the entire 2018 election cycle.

“Affordable healthcare, economic security, and a plan to deal with COVID-19 are on the ballot, and achieving those goals starts with flipping the Texas House,” the HDCC’s chairwoman, Rep. Celia Israel of Austin, said in an announcement of the committee’s latest fundraising that was first shared with The Texas Tribune. “That has been our mission from day one, and donors have responded in a big way.”

The HDCC said the $3.6 million came from 4,165 donors, 98% of whom donated online. Over three-quarters of contributions were less than $100, and roughly four out of five donations came from Texans.

Democrats are nine seats away from the majority, a major prize ahead of the 2021 redistricting process. In addition to its work to try to flip seats, the HDCC is tasked with protecting incumbents, including the 12 who flipped seats in 2018 and are now GOP targets.

Andrew Reagan, the committee’s executive director, said the money is going toward ensuring that battleground campaigns have “robustly funded paid communications,” including TV and digital ads, as well as direct mail. Some candidates are already running ads that are jointly funded by their campaigns and the HDCC.

The committee did not immediately disclose its cash-on-hand figure, but Reagan said it is “healthily in the seven figures.” Groups like the HDCC have until the end of the day Monday to report their full finances for the latest period to the Texas Ethics Commission.

The chief Republican groups defending the House majority have not announced their latest fundraising figures yet. They include the two main member-drive organizations, the Texas House Republican Caucus PAC and Leading Texas Forward.

Candidates are also subject to the Monday deadline, and Democrats expect at least some of their battleground contenders to post sizable hauls. Already one candidate — Celina Montoya, who is challenging Rep. Steve Allison, R-San Antonio — announced she raised $415,000 over the 86-day period.