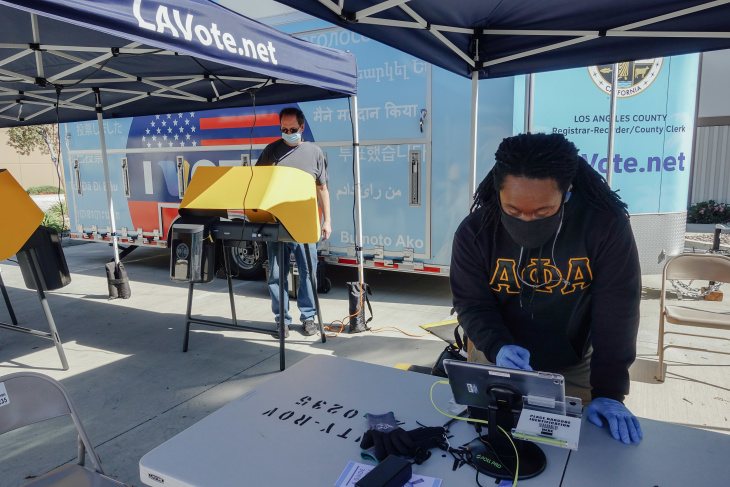 L.A. County vote center worker Ryan Richard in Palmdale, CA on May 3, 2020. Coronavirus precautions were in place for in-person voting during the special election for California’s 25th District congressional race.

As the largest voting jurisdiction in the country, Los Angeles County needs an army of election workers to run voting sites and process ballots for 5.4 million registered voters.

For the general election, the L.A. County Registrar-Recorder’s Office estimates it will enlist 16,700 workers, mostly to operate vote centers during the 11-day period when Angelenos can cast a ballot in-person. The first centers will begin to open Oct. 24, but the majority will be available during the following weekend, through Election Day.

As of last week, the county had recruited roughly 15,000 election workers. “Those [people] have applied … have engaged in training, have been contacted to engage in training, and have been provided training options,” said L.A. County Registrar-Recorder spokesman Mike Sanchez. The goal is to finish the hiring process by Oct. 16, he added. “We are extremely grateful for the strong community response.”

Poll workers in L.A. County receive a stipend of $100 per day and $80 for mandatory training days.

There’s been a surge of interest this year in the usually un-sexy job of election administration. The spectre of a contagious virus, protests for racial justice and a tumultuous 2020 campaign season inspired many civic–minded groups to launch efforts to draft young people to become poll workers.

(Younger folks are less vulnerable to COVID-19 than the older cohort who generally make up the majority of staff at polling places nationwide. But in L.A. County there has recently been an uptick in deaths and hospitalizations among young adults in their 20s.)

Laura Mueller-Soppart says she founded her organization, Work The Polls, to galvanize people in their 20s and 30s after her own frustrating experience in the New York primary, which was rife with technical problems and long lines.

“We’re in a very precarious situation in terms of how we administer our elections this year,” Muller-Soppart said. “The goal is to diversify the poll worker corps, so the burden doesn’t just sit on those over-60 like it usually does.”

With that in mind, L.A. County has focused more of its recruiting efforts on local college campuses, said L.A. County Supervisor Janice Hahn.

“We are making a much more concerted effort this year to recruit young people to be election workers, and it is paying off,” Hahn said. “We wanted to recruit 3,500 college students and we have already far surpassed that goal with 4,500 applications coming in from local students so far.” 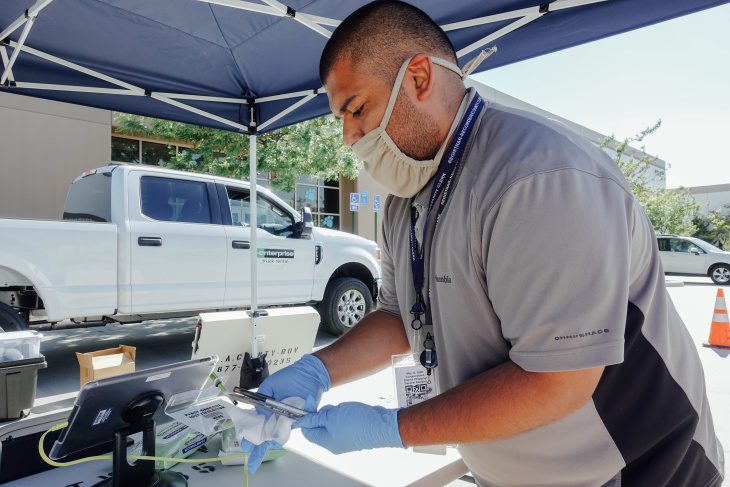 Another major pipeline for election workers? County employees who will be on the clock.

[If you prefer to vote by mail, every registered voter in California should get a ballot in their mailbox starting the week of Oct. 5. Learn more through our Voter Game Plan.]

In August, Los Angeles County Supervisors took an emergency step to ensure vote centers would have the necessary staffing. They voted to invoke the “Disaster Service Worker” program, which lets the county reassign its employees to different jobs in extreme situations such as an earthquake — or a global pandemic.

The plan includes “mandatory thresholds for each [county] department in order to fill all crucial positions,” said Lisa Garrett, Director of Personnel for L.A. County.

The county is in the process of identifying 7,400 employees who will serve as vote center staff or reservists.

The emergency measures mean they’ll be paid differently, too. In the past, county workers who chose to become election workers were paid their usual salary for the day, plus the stipend for vote center staff.

This year, as Disaster Service Workers, county employees won’t receive the stipend. Instead, many will be eligible for overtime pay (usually time-and-a-half) for working extra hours on top of their normal schedules — which is typical of long shifts at vote centers that can range from 12-to-16 hours on Election Day.

“County departments will pay the regular salaries of their employees assigned as [Disaster Service Workers] during the election and all overtime costs will be funded by the Registrar-Recorder/County Clerk,” Garrett said. “The County continues to pursue additional funding and reimbursement sources for this assignment.”

That will include at least some CARES Act money to help local governments hold elections under threat from the coronavirus. Earlier this month, the Secretary of State awarded L.A. County $16 million in federal grant funding for election administration.

If you’re still waiting to hear back about your L.A. County poll worker application, you’re not alone, according to Mueller-Soppart of Work the Polls. She says the majority of people who pledged to become election workers here through her organization haven’t heard back from L.A. County.

A possible bottleneck: the county implemented a new data management system to track poll worker applications, and that included introducing a new online portal for applications on Sept. 3.

Mueller-Soppart says the new system went into effect after a flood of applications came in from Work the Polls and other groups, which were active over the summer. She only became aware of the new portal, Mueller Soppart said, after several of her pledged workers grew concerned about a lack of response to their applications and called the county. 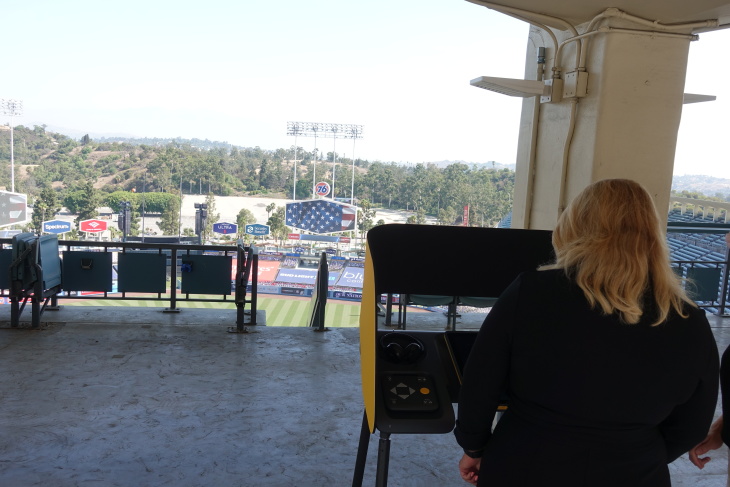 Members of the media got a preview of the Dodger Stadium vote center, opening up to the general public Oct. 30, 2020. (Libby Denkmann for LAist)

“We learned that because of that shift, any new applications that did not already receive a login would have to reapply [through the new portal],” Mueller-Soppart said. “And when asked if there was going to be any kind of notification, or any kind of heads-up, the county let our pledges know that L.A. County would not be letting anybody know.”

The Registrar-Recorder’s office acknowledged there are cases where would-be poll workers are being asked to re-apply, but said that’s generally because third party applications didn’t have enough of the information the county needed for recruitment and placement.

“As we work through those applications requiring more information — or as individuals reach out to us for follow-up — we are filling those data gaps,” Sanchez said. “In some cases, we are encouraging interested workers to complete the data on our new portal to have a complete record.”

Mueller-Soppart says she doesn’t want young people trying to get involved in civic life for the first time to be discouraged.

“We have gotten nothing but excitement back from L.A. County and from every county’s office across the country,” Mueller-Soppart said. “I really encourage everyone to meet their county halfway and just get [the application] done.”