If you have studied American history at all then the name of Ethan Allen will be familiar to you. After fighting in the French and Indian War (1754–63), Allen settled in what is now Vermont. At the outbreak of the American Revolution, he raised his force of Green Mountain Boys (organized in 1770) and Connecticut […]

Ethan Allen–Hero Of The Revolution — In Saner Thought

Dine and die? Government give more financial support to restaurants and support health over profit!

The number of coronavirus cases in France has passed 500,000, authorities said on Friday after recording a near-record daily jump in infections. Meanwhile, hundreds of restaurant and bar owners in the virus-hit city of Marseille took to the streets to protest a government order to close their businesses to stop the alarming spread of Covid-19.

An event in Brooklyn aimed at raising awareness about the alarming cluster of COVID cases in Orthodox Jewish neighborhoods was cut short on Friday, after a pair of anti-mask activists hurled personal insults at health officials and shouted racial epithets.

Orthodox radio host Heshy Tischler stormed the podium and accused Dr. Ted Long, the head of the city’s Test & Trace program, of lying about the increase in infections. “Your violent Nazi storm troopers are coming in here to violate us,” he shouted. “That’s all you’re here for!”

As that was happening, a second man confronted Dr. Mitchell Katz, the leader of the city’s public hospital system. “Get the fuck out of here,” he said. “Go to your fucking nice house some place.” When a mayoral staffer approached the man with a surgical mask, he rejected it. “I don’t want a mask. It’s my freedom.” 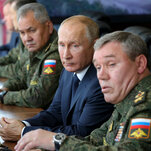 With an eye to a possible Biden presidency, the Russian leader called for a “reboot” on information security but offered no concessions.

Wants more Floridians to die for his propping up Trump and his ilk.

Florida is lifting all coronavirus restrictions on restaurants and bars effective immediately, with Gov. Ron DeSantis (R) saying he is also prohibiting local governments from closing businesses or imposing any restr…

“Suffice to say that the person you see presiding over COVID-19 press conferences is the same one in the privacy of his office. He has little patience for facts or data that do not comport with his personal world view. Thus, the conversations are erratic and less than fully thoughtful.”

Cardillo said that unlike other presidents he has served under, Trump puts more weight on “the word of dictators like [Russian President] Vladimir Putin” than the U.S. intelligence community.