A trial of the test last month involving some 400 people at Sheba showed about 95% accuracy.

Rep. Ilhan Omar (D-Minn.) fired back at President Trump Tuesday night after he went after her at a campaign rally in Pennsylvania.Trump …

President Trump on Tuesday mocked journalists who were hit with rubber bullets and assailed by police while covering protests against racial injustice this summer.

President Trump on Tuesday mocked journalists who were hit with rubber bullets and assailed by police while covering protests against racial injustice this summer.The president, during a rally in Pennsylvania, reco…

Kristin Urquiza, who lost her father to COVID-19, called out President Donald Trump after he said that the deadly pandemic “affects virtually nobody” as nearly 200,000 Americans had at that time died from the virus.

Source: Woman Who Lost Her Dad to COVID Responds to Trump Downplaying Virus: ‘My Dad Was Not a Nobody’

I’m concerned about Covid-19, just like many of you. I’m concerned about this pandemic that has already killed 200,000 Americans. I’m 68 and I’m scared. I have decided this year to vote Democrat for President, as many other lifelong Republicans are doing. Please join me and vote Biden/Harris. They will lead us better than the current administration.

Today, on #VoterRegistrationDay, let’s honor #RBG by standing up and showing up. Our vote is our power. We must use it. Register right now: http://vote.pa/register. Former New York City Mayor Michael Bloomberg has raised more than $16 million from individuals and foundations over the past week to pay court fines and fees that are preventing […] […]

Thanks to Prof. Baker for this post: Happy #NationalVoterRegistrationDay! Register To Vote Now! #VoterRegistrationDay Is Today! Don´t Delay! Get #VoteReady! — Profesorbaker’s Worldwide Bilingual Blog — ShiraDest: Education, Cooperation, and The 4 Freedoms for ALL Human Beings

Via Aleksey godin – Last week, a Russian military court sentenced seven Crimean Tatars to prison terms ranging from 13 to 19 years. It is part of a pattern of politically motivated prosecutions that has been happening in Russia-occupied Crimea for the past six years. 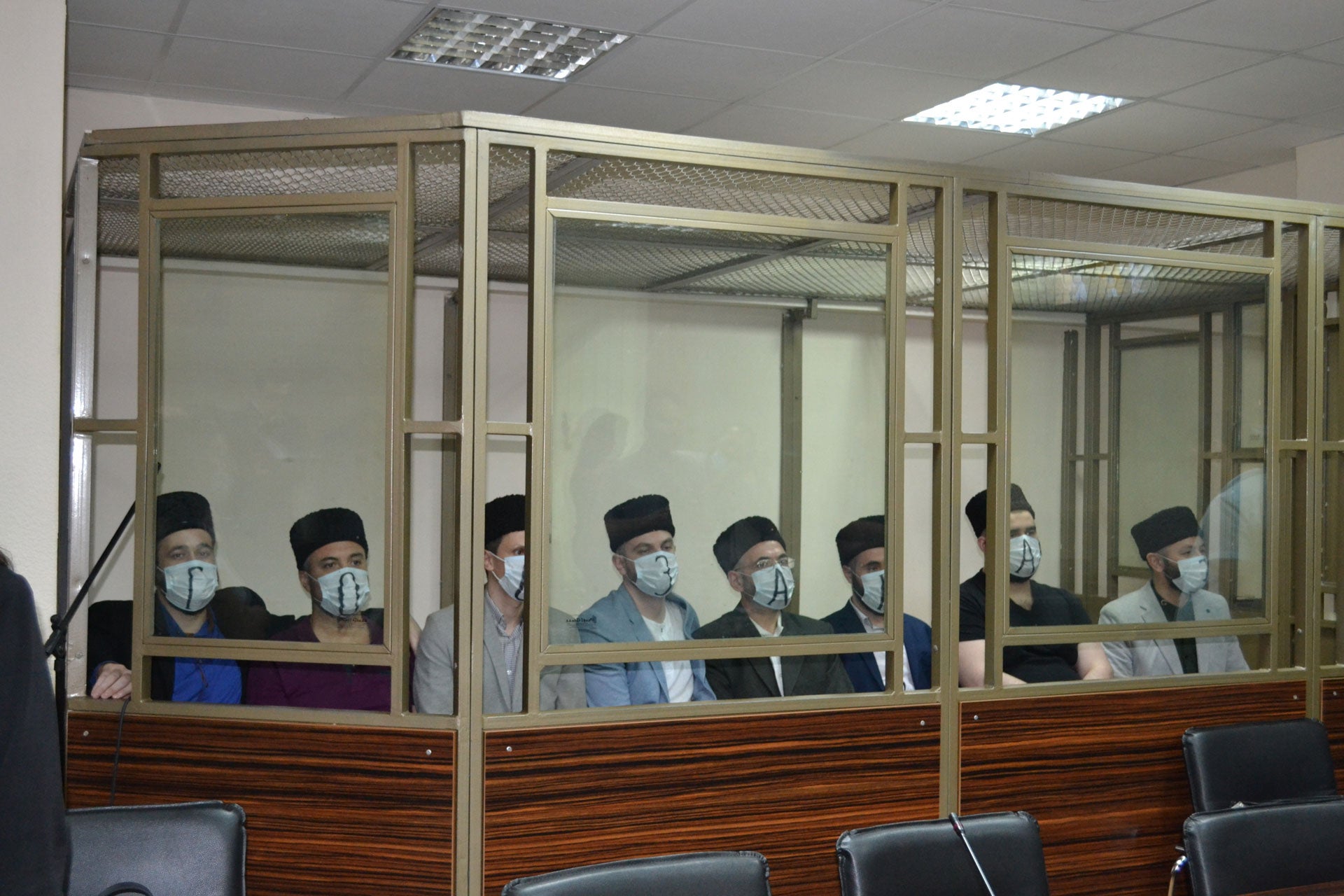 Last week, a Russian military court sentenced seven Crimean Tatars to prison terms ranging from 13 to 19 years. It is part of a pattern of politically motivated prosecutions that has been happening in Russia-occupied Crimea for the past six years.

The seven men were convicted of organizing or participating in a “terrorist organization.” One man was acquitted.

In a system based on rule of law and justice, none would even have been prosecuted.

The men are activists with Crimean Solidarity which was established in 2016 to support Crimean Tatars arrested or jailed on politically motivated grounds. It helped organize legal support for detainees, financial and social support for their families, and live-streamed court proceedings and police searches. Since 2017, authorities have jailed the group’s members and raided their homes.

The activists were accused of involvement in Hizb ut-Tahrir, an international Islamist movement that seeks to establish a worldwide caliphate based on Sharia, but publicly denounces violence as a means to achieve its goal. In 2003, Russia banned Hizb ut-Tahrir as a terrorist organization, but it is not banned in Ukraine or most of Europe. In recent years, Russian authorities have prosecuted dozens of peaceful activists in Crimea for alleged involvement in Hizb ut-Tahrir.

None of the charges against the eight were related to planning, carrying out, or being an accessory to any act of violence.

From the beginning, authorities showed disregard for due process. They conducted warrantless searches at the homes of six of the men during their arrest in 2017. Two lawyers representing some of the men told me the security services and police refused to let them enter the homes during the searches. The lawyers were also denied timely access to procedural documents. As is usual in such cases in Crimea, the prosecution relied mostly on recordings of discussions about religion and politics obtained through wire-tapping, and testimony from “secret witnesses.”

Crimean Tatars have been the main voice of peaceful dissent to Russia’s occupation of Crimea. As a result they have also been victims of enforced disappearances, arbitrary arrests, torture, and ill-treatment in custody. Last week’s verdict, once again, shows just how determined Russian authorities are to make Crimean Tatar activists – and their families – pay the price and how they will subvert the law and courts to do so.

The West should instead consider sanctions against individuals that would target Russian President Vladimir Putin’s lieutenants and inner circle, Volkov said. Sweeping Western sanctions against Russia would be playing into the Kremlin’s hand, a top aide to Russian opposition leader Alexei Navalny has told DW. Navalny was the victim of a near-fatal poisoning in August.

RIP He sang behind Frankie Valli in a hit-making harmony group that gained a new audience when “Jersey Boys” stormed Broadway. He died of the coronavirus.

There is no plausible medical reason that I know of to not wear a mask – if there is, then the person is unable to work the poll for everyone’s safety. Period!

A Wisconsin man is suing a LaCrosse city clerk and Gov. Tony Evers (D) after he was dismissed from a paid poll worker position for refusing to wear a mask at a voting precinct, citing a medical condition….