Dr. Landrum said that Arctic communities are already suffering from the changes. Eroding coastlines are forcing some Alaska Native villages to consider relocating. Other changes are affecting the food supply. Warmer storms that bring rain on existing snow, for example, can lead to starvation of the animals Indigenous groups rely on.

“Arctic climate change is not in the future for them,” she said. “It’s now.” 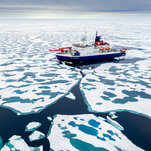 Open water and rain, rather than ice and snow, are becoming typical of the region, a new study has found.