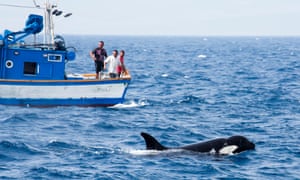 Highly intelligent social mammals, orcas are the largest of the dolphin family. Researchers who study a small population in the Strait of Gibraltar say they are curious and it is normal for them to follow a boat closely, even to interact with the rudder, but never with the force suggested here.

The Spanish maritime authorities warned vessels to “keep a distance”. But reports from sailors around the strait throughout July and August suggest this may be difficult – at least one pod appears to be pursuing boats in behaviour that scientists agree is “highly unusual” and “concerning”. It is too early to understand what is going on, but it might indicate stress in a population that is endangered.