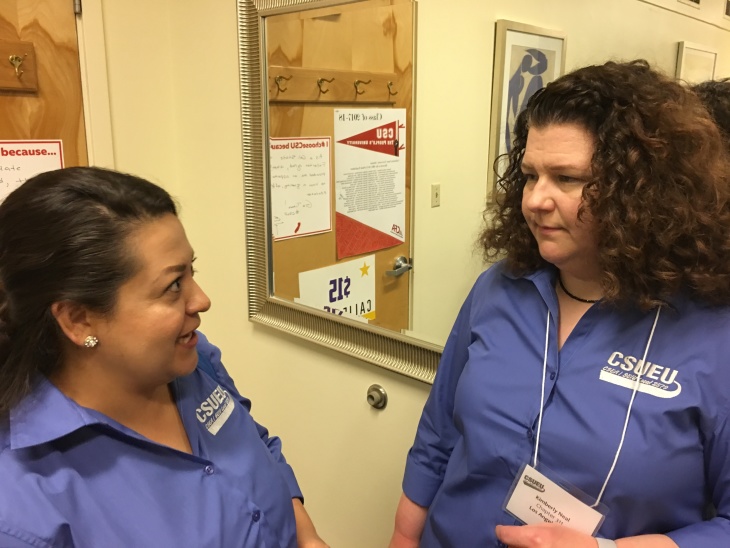 Kim Neal, right, is chair of the California State University Employees Union at CSU Los Angeles. The union represents clerical and IT workers, custodial staff and others at all 23 CSU campues. (Courtesy Kim Neal)

Following a surge of coronavirus outbreaks at California State University campuses in Chico and San Diego, employees of Cal State campuses in the L.A. area are expressing concerns that COVID-19 protocols are inconsistent and could lead to further spread

The protocols currently in place give the presidents of each of the 23 Cal State campuses the authority to develop their own pandemic guidelines. While the university system argues that campus-specific protocols allow for more flexibility to respond to different conditions at different schools, critics say a systemwide policy would send a stronger message.

“A lot of our members are very concerned about exposure to COVID-19 while they’re working on campus,” said Cal State Los Angeles employee Kim Neal, the school’s chapter chair of the California State University Employees Union. The union represents 16,000 clerical workers, custodians, IT workers and other employees in the CSU system.

“Right now there’s no measuring of temperatures. There’s no self-checks,” said Neal, an instructional support technician in CSLA’s Department of Television and Film. “There’s no arrival checks, there’s nothing of that in place that we’re aware of.”

A directive from the chancellor’s office to the campuses, she said, would reduce the risk of virus exposure to her members. 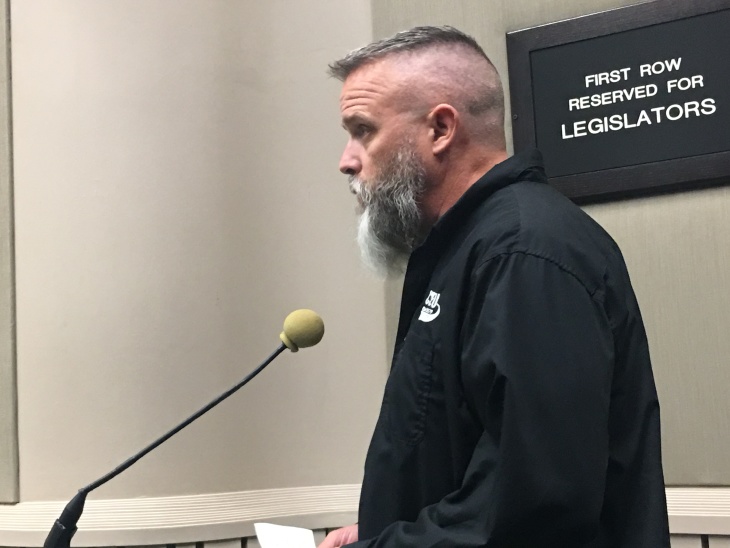 The union’s vice president, Pete Rauch, said COVID-19 guidelines issued by Cal State Chancellor Tim White should have been a mandate for each campus, rather than suggestions.

“Let’s just say that I show up on a campus and then it turns out a couple days later, I was infected,” Rauch said. “And while I was walking around on the campus, you know, I went to two or three different buildings. I don’t think that there’s a uniformity in how that’s reported, not to the campus and not back to the employees either.”

The outbreaks at Chico and San Diego led both campuses to cancel their few remaining in-person classes, and Chico cleared its dorms last week.

As of Thursday, Chico State’s tally of student and employee COVID-19 cases totaled 156. As of the same day, San Diego State said it had counted 440 confirmed cases related to employees.

The way different campuses check for COVID-19 symptoms among people on campus underlines the variations in protocols and deadlines.

At Cal Poly Pomona, approximately 500 employees and students are on the campus on a given weekday. Only a fraction of on-campus housing has been opened and most employees have been asked to work from home, said Leticia Gutierrez-Lopez, the university’s Associate Vice President for Student Health and Well-being.

“I think we started very cautiously,” she said.

Cal Poly Pomona’s protocols require students and employees who need to be on campus to fill out a web-based symptoms checker. The university will be moving to an app soon called #CampusClear, Gutierrez-Lopez said.

“I think we’ve been able to manage so far by using the screening and also by using safety training for students and staff,” she said. 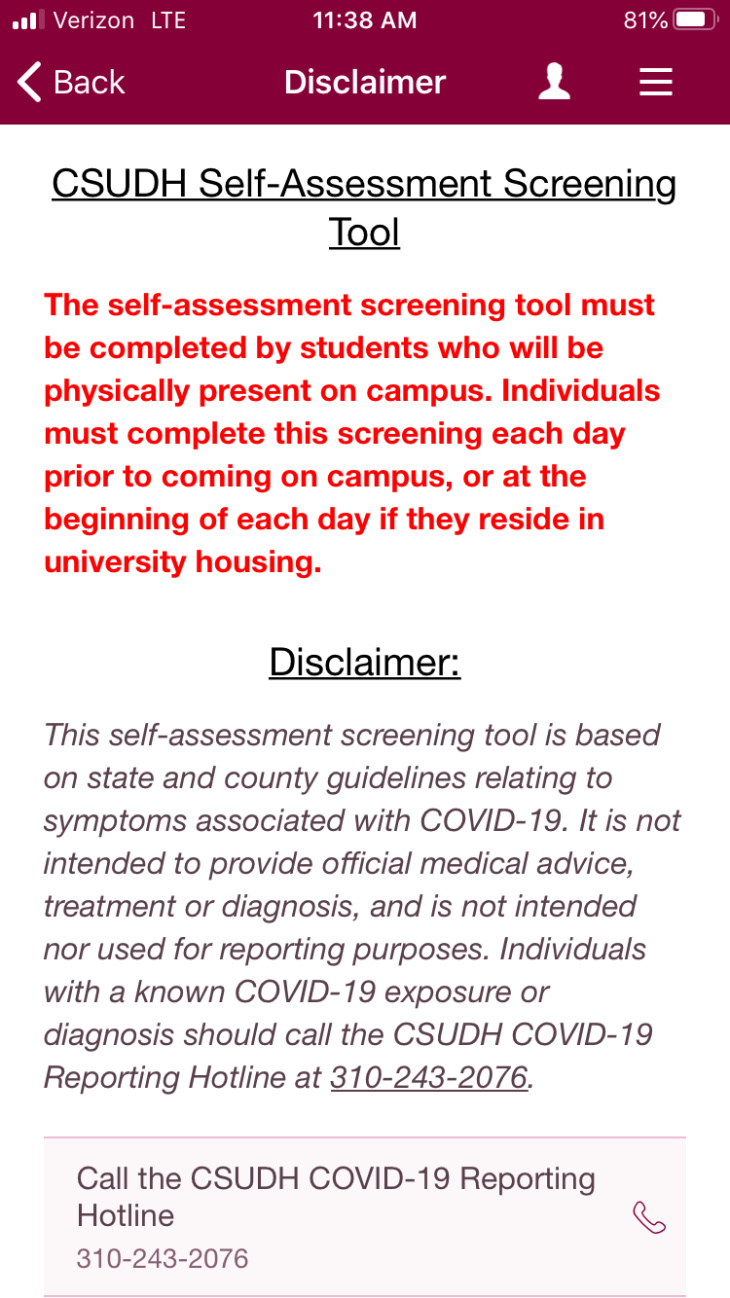 The app-based symptom checker for students and employees who will be at the CSU Dominguez Hills campus. (screenshot)

At the opposite end of Los Angeles County, CSU Dominguez Hills, which has about 200 staff and students on campus on an average weekday, reopened without a similar symptom checker in place, but this week officials rolled out a symptom screener on its iToro app. Students who will be on campus, in the dorms or to attend the few in-person classes are required to use the app to answer questions regarding virus symptoms.

Still, employees are not required to answer those same questions. The university says it’s talking to the employee unions for sign off.

“We’re just trying to make sure that we understand who our audience is, and that we’re asking the right questions,” said Mike Williams, the environmental health and safety manager at Dominguez Hills.

CSULA’s COVID-19 plan outlines various cleaning and sanitizing methods to take place on campus, and says students will be instructed to carry out self-checks but the plan does not describe any mandatory checks for people on campus.

“Since March, Cal State L.A. has sent repeated communications to students and employees regarding COVID-19, including preventative measures and signs and symptoms of the disease,” CSULA’s communications office said in an email.

“The university has also provided information on self-screening, which can be found on this webpage. Employees and students have also been instructed on what to do if they are diagnosed with coronavirus or have been exposed to others who have been diagnosed with the disease. Signage has been posted on buildings across campus and placed along walkways and other open areas,” the office said.

Audrey Dow, vice president at the Campaign for College Opportunity, says autonomy serves campuses well when it comes to setting curriculum to address local educational needs — but it hasn’t served the campuses well during the pandemic.

“Students really need to have a consistent strong message coming from the Chancellor’s Office,” Dow said. “We’re not sending a strong message to students about what they need to do in terms of precautions once they get onto campus.” That could lead to outbreaks at different campuses.

The office sent campuses an 18-page guide to protocols as the fall semester began. In a memo sent last week, the Chancellor’s office urged campuses to report and investigate new cases.

“Each of the campuses has developed its own repopulation plan and there are differences in each plan related to the variance in enrollment, programs, facilities, etc. across the campuses,” said Mike Uhlenkamp, spokesman for Chancellor White.

He said the chancellor’s office is not keeping an official tally of COVID-19 cases at the 23 campuses.

Our news is free on LAist. To make sure you get our coverage: Sign up for our daily coronavirus newsletter. To support our nonprofit public service journalism: Donate now.