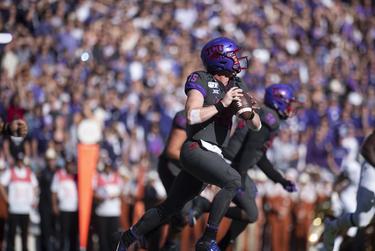 TCU had been scheduled to play its rival SMU on Friday, Sept. 11.

Plans to press forward with major college football in Texas have been dealt an early setback after Texas Christian University canceled its first football game due to COVID-19.

The game against Southern Methodist University, scheduled for Sept. 11, was canceled Friday after some TCU football athletes and support staff tested positive for the virus, said Jeremiah Donati, TCU’s director of intercollegiate athletics, in a statement. Donati did not indicate how many athletes or staff tested positive but said “no one is currently facing serious health issues.”

“In the course of following CDC guidelines and our aggressive testing and contact tracing strategy, we discovered that some student-athletes and support staff in our football program have tested positive for COVID-19,” Donati said. “Those individuals were notified immediately and are currently abiding by CDC protocols.”

The Big 12 Conference announced in August its football season would move forward as scheduled, with member schools agreeing to enhanced testing for athletes. The TCU-SMU game would have been the first involving a Big 12 team this season. Texas Tech University, Baylor University and the University of Texas at Austin all have games scheduled for Sept. 12.

Donati said TCU will continue following prevention and testing protocols ahead of their conference opener against Iowa State on Sept. 26.