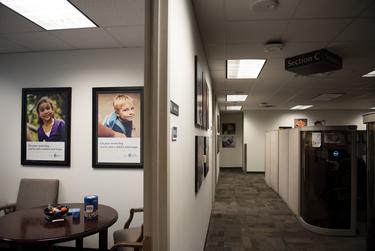 Texas officials will no longer send foster children to live at a rural facility where a teen girl died this spring in what a federal judge described as an apparently “avoidable death.”

The decision by child welfare officials to cut ties with the Prairie Harbor residential treatment center in Wallis came to light Thursday during the first day of a two-day hearing in which state officials argued that they had made significant progress toward reforms ordered by U.S. District Judge Janis Jack in a nearly decade-old class-action lawsuit brought by foster children.

An obviously skeptical Jack, who at one point quipped that she took state officials’ testimony “with a grain of salt,” threatened several times during the hearing to hold the state in contempt of court for not adequately implementing new policy.

The hearing is scheduled to continue Friday, and Jack is expected to decide whether to hold Texas child welfare officials in contempt of court, for the second time in less than a year.

On a video call sometimes interrupted by the pings of computer alerts and a hiccuping internet connection, Jack lobbed fiery questions at her iPad screen, such as why state officials hadn’t asked lawmakers more quickly for emergency funding to address systemic failures.

“I’m not understanding the state’s reluctance, and actually refusal, to abide by these orders,” Jack said. State witnesses used “circular speak” to avoid answering her questions, she said. And at one point she scolded Texas Department of Family and Protective Services Commissioner Jaime Masters for turning off her video camera, saying she wanted to make sure the commissioner was present.

State officials described their efforts as a work in progress and resisted the sweeping terms Jack used to criticize the system they oversee. But given the opportunity, they declined to name any perceived inaccuracies in the court-appointed monitors’ June report detailing 11 recent child deaths. At one point, Masters told the judge, “Your Honor, I’m concerned by what I’m hearing as well.”

Jack and attorney Paul Yetter, a partner with Yetter Coleman in Houston who represents more than 10,000 children in the class-action lawsuit brought against Gov. Greg Abbott and Texas’ health and human services leadership, paid particular attention to the death earlier this year of a 14-year-old girl, referred to as K.C.

On Feb. 8, K.C. woke shortly after 10:30 p.m. to use the restroom, according to the monitors’ summary of Prairie Harbor staff testimony. A staff member supervising the girl noticed that she limped but assumed it was because her leg was asleep.

The staff member heard the girl fall and found her collapsed on the bathroom floor, lying on her back. Over 10 minutes, the girl’s condition reportedly deteriorated and she lost consciousness, though she continued to breathe and had a pulse, according to the summary of staff testimony.

Staff waited to call 911 until 11:08 p.m., more than 30 minutes after K.C. had collapsed, the monitors wrote. K.C. was pronounced dead shortly after arriving at the hospital, and a forensic review found the cause was a pulmonary embolism associated with a deep blood clot in her right calf.

The court-appointed monitors described K.C. in their report as obese. She was approximately 5’3” and weighed just under 300 pounds, with medical records indicating she had high blood pressure and blood glucose levels. And they noted that daily progress notes signed by Prairie Harbor staff in the previous month documented the girl’s complaints of leg pain, but her last doctor’s appointment was in October 2019.

State officials said an investigation into K.C.’s death was ongoing. And they revealed during the hearing that they were terminating their contract with Prairie Harbor and would no longer place foster children in the residential treatment center, which caters to traumatized children with complex behavioral needs. State officials cited the facility more than 60 times for minimum standards violations between February 2017 and December 2019, according to the monitors’ report.

Jack said it was “unbelievable” that state officials had continued to place foster children at Prairie Harbor for up to seven months after K.C.’s death. And after officials testified that they had this week ceased placements there, Jack said that she discovered in a simple internet search that the home’s owner and executive director have a new facility in Corpus Christi that is poised to take new foster placements.

Prairie Harbor officials could not be reached for immediate comment on Thursday.

It is “stunning,” Jack said, that the Texas Health and Human Services Commission does not have “any stipulations that the owners of these facilities are not allowed to open under another name. That to me is also a problem that needs to be addressed.”

Children enter the foster care system after they are found to have suffered abuse or neglect at home. But Jack’s 2015 ruling, which state attorneys fought back against for years until it was ultimately weakened by an appeals court, found that foster children regularly become victims of sexual abuse and “often age out of care more damaged than when they entered.”

In November 2019, Jack held the state in contempt of court after a similarly fiery hearing for failing to comply with her orders. At the time, she made clear that based on initial information from the monitors, she no longer found the state’s child welfare agency “to be credible in any way.” She fined the state $150,000 at the time.

The Texas Department of Family and Protective Services, which oversees Child Protective Services investigators as well as the privately run foster care system for children who are removed from their homes, also has been the subject of much recent legislative scrutiny.

During the 2017 legislative session, lawmakers poured an additional $500 million into the agency, boosting pay for case workers and hiring more.

But the Texas Legislature has not held any hearings during the coronavirus pandemic, which meant Jack’s hearing was the first in months to feature public testimony about oversight of the oft-maligned agency.

After her original ruling, Jack appointed the two monitors to serve as her eyes and ears, helping her to supervise the system for “an indefinite period of time.” Kevin Ryan, a former New Jersey commissioner of the Department of Children and Families, and Deborah Fowler, executive director of the nonprofit Texas Appleseed, have served in that capacity, drawing criticism from state attorneys who say they have charged “exorbitant” fees for their work.

In a recent legal filing, lawyers from the Texas Attorney General’s Office, which is defending child welfare officials in the case, wrote that they had “taken tremendous strides” to comply with Jack’s order. The arguments made by the children’s attorneys, they wrote, paint “an incomplete picture” of the state’s efforts.

The hearing is scheduled to continue Friday morning.