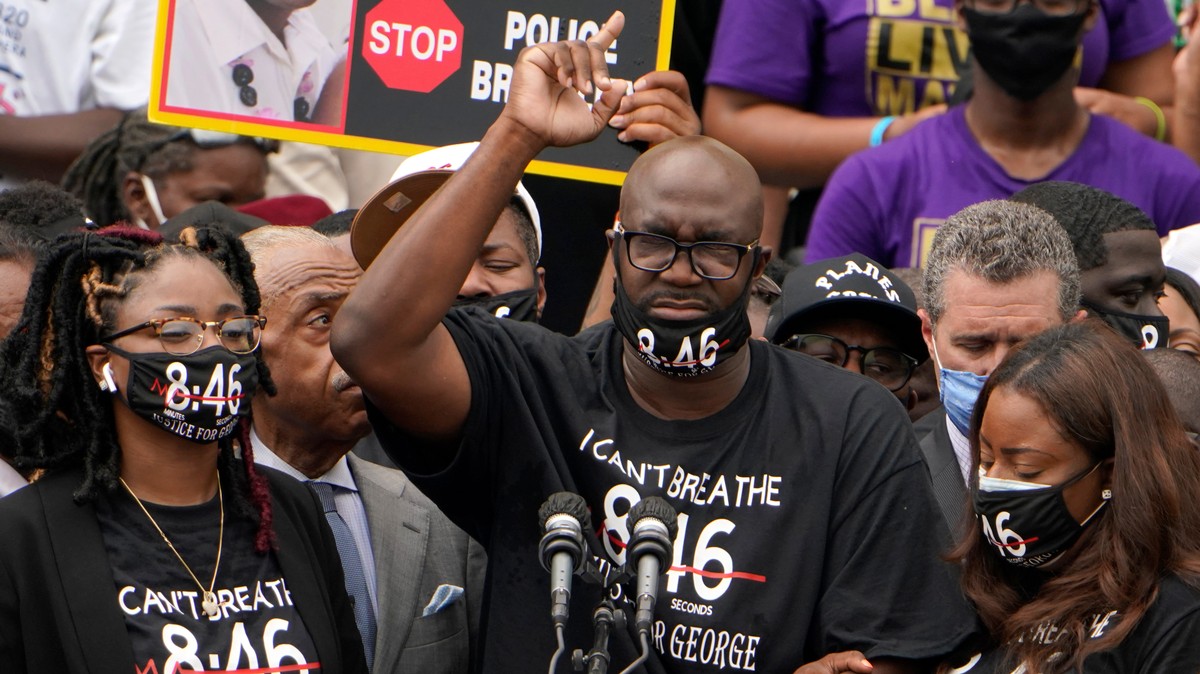 Want the best of VICE News straight to your inbox? Sign up here.

Black Americans who have lost loved ones to police brutality banded together Friday to commemorate the 57th anniversary of Dr. Martin Luther King Jr.’s historic March on Washington — and they had a lot of names to say.

“I wish George was here to see this right now,” Floyd’s brother Philonise said. “That’s who we’re marching for. For George. For Breonna. For Ahmaud. For Jacob. For Pamela Turner and Michael Brown. For Trayvon. And anyone else who lost their lives to evil.”

The families of Jacob Blake, George Floyd, Breonna Taylor, Ahmaud Arbery, Trayvon Martin, and others closed out three hours of speeches from politicians, union workers, entertainers and activists on the steps of the Lincoln Memorial. More than 50,000 attendees packed onto the National Mall to listen before beginning the march to the Martin Luther King Jr. Memorial.

This year’s theme, “Get Your Knee Off Our Necks,” is a direct attack on police brutality and the killing of Black Americans. The relatives of those slain, many through tears, took to the podium to thank protestors for their support and share their condolences with others who share the same experience.

The sister of Jacob Blake, the unarmed black man who was shot and paralyzed by Milwaukee Police Sunday, spoke directly to Americans who oppose the Black Lives Matter movement.

“I’m here to tell you in front of the world, that you’ve got the right one,” Blake’s sister Letetra Widman said. “We will not be your docile slave. We will not be your footstool to oppression. Most of all, we will not dress up this genocide and call it police brutality.”

Others, including Jacob Blake Sr., expressed mental exhaustion over the repeated slayings of black Americans by police.

“There are two systems of justice in the U.S., there’s a white system, and there’s a black system,” Jacob Blake Sr. said, calling out the killers of George Floyd, Amadou Diallo, and others. “The Black system ain’t doing so well. I’m tired of looking at camera [footage] and seeing these young black and brown people suffer.”

“I am tired of learning new names and adding new hashtags to an already long list of victims of police terror,” Botham Jean’s sister Alissa Finley echoed, invoking the names of Sandra Bland, Antwon Rose, Terence Crutcher and others.

Voting rights were also a big topic at the march this year, as USPS continues to make drastic changes that have slowed the mail, just months before a historic election where more people are voting absentee than ever before because of the threat of coronavirus. The son of Eric Garner challenged people to take to the polls this November.

“It’s been six years since my father’s words became our words,” Garner Jr. said, referring to his dad’s dying words, ‘I Can’t Breathe,’ which has since become a rallying cry for the Black Lives Matter movement. “We have to make a change. I am challenging the young people to go out and vote. Change is possible, we just have to put in the work.”

Political action was another common theme for speakers Friday. Democratic Vice President nominee Kamala Harris, Rep. Ayanna Pressley of Massachusetts, and Martin Luther King Jr. III all implored people to not only vote, but to support legislation like the George Floyd Justice and Policing Act and the John Lewis Voting Rights Act.

The night before Friday’s March on Washington, President Trump accepted his nomination at the RNC with a rambling, hour-and-ten-minute speech that blamed Democrats and the Black Lives Matter movement for violent protests and riots across the country in the wake of Black Americans who have died at the hands of police.