Twitter has taken action to stop a spam operation that pushed messages from fake accounts about Black people abandoning the Democratic Party.

The company removed two fake accounts and deleted the account of a San Diego man who spammed the platform, a Twitter spokesperson confirmed Wednesday.

So when normal activities resumed, with encouragement from President Trump and Doug Ducey and against my warnings, my dad caught up with friends to sing a “Hard’s Day’s Night” together at a local karaoke establishment. He said to me, “Kristin, why would the governor and president say it was safe if it wasn’t?”

But it wasn’t safe. And my father paid with his life.

With the economy in freefall and 30 million people unemployed — the largest since the Great Depression — Donald Trump’s reopening pushed a false choice between public health and economic health. Sadly, he didn’t realize you can’t have an economic recovery without a strong and healthy workforce

Trump’s coronavirus decision-making process is and has been determined by his re-election aspirations. He is willing to sacrifice our loved ones and hopes that the American public will tolerate an unnecessarily high death count. It was recently reported that Jared Kushner scrapped a pandemic plan when it became obvious that “blue” states would be hit hardest. And we know that Indigenous, Black, and Latino people — people like me and my dad — are more likely to contract and die from coronavirus. Trump’s “suburban housewife” demographic remains largely untouched thus far, exposing that there are indeed two Americas: the America where my father died and the America where Trump lives and erroneously promotes the idea that reasonable pandemic safety precautions are civil rights violations.

My father raised me to be a patriot and a defender of democracy, which is why I am voting for Joe Biden. Not only is he the leader that will step into office on day one to contain the virus but he also will defend the freedoms and liberties of each of us.

I do this work out of love. Love for Dad, love for humanity, and love for democracy.

Source: My father had faith in Donald Trump. He followed his advice — and he died of Covid-19 | The Independent | Independent

The Centres for Disease Control and Prevention (CDC) director has walked back new testing guidelines released by his agency after it sparked backlash among some of the nation’s top health experts.

Dr Robert Redfield issued a statement late Wednesday night that “testing may be considered for all close contacts of confirmed or probable Covid-19 patients,” adding that “everyone who needs a Covid-19 test can get a test.”

In a joint statement late Wednesday, the Infectious Diseases Society of American (IDSA) and the HIV Medicine Association (HIVMA) called for “the immediate reversal of the abrupt revision” by the CDC.

In a separate statement, Susan Bailey, president of the American Medical Association—the nation’s largest organization of doctors—called the revision to the testing guidance “a recipe for community spread and more spikes in coronavirus.” 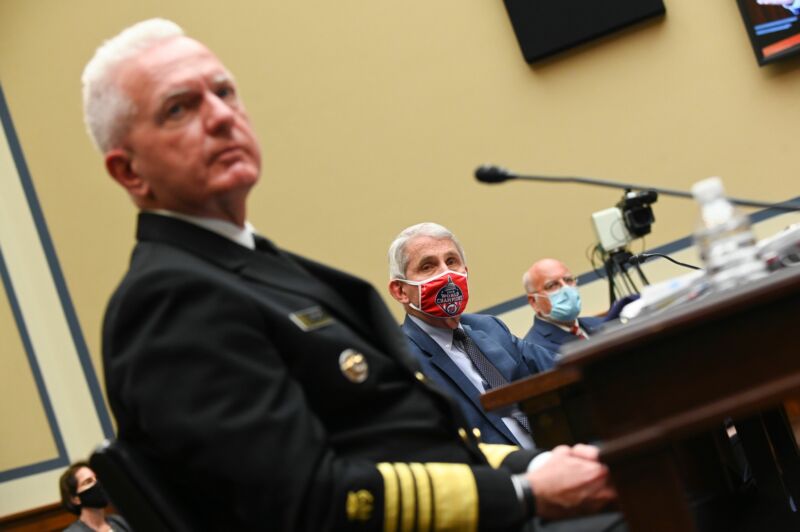 Enlarge / Admiral Brett Giroir, US assistant secretary for health, from left, Anthony Fauci, director of the National Institute of Allergy and Infectious Diseases, and Robert Redfield, director of the Centers for Disease Control and Prevention (CDC), listen during a House Select Subcommittee on the Coronavirus Crisis hearing in Washington, DC, July 31, 2020. (credit: Getty | Erin Scott)

Intense backlash from medical and infectious disease experts continues over revisions to the US Centers for Disease Control and Prevention’s COVID-19 testing recommendations, which as of this week discourage testing for people who have been exposed to the virus but are not showing symptoms.

In a joint statement late Wednesday, the Infectious Diseases Society of American (IDSA) and the HIV Medicine Association (HIVMA) called for “the immediate reversal of the abrupt revision” by the CDC.

In a separate statement, Susan Bailey, president of the American Medical Association—the nation’s largest organization of doctors—called the revision to the testing guidance “a recipe for community spread and more spikes in coronavirus.”

At a press conference on Thursday, Nancy Pelosi gave voice to the frustration of every American hoisting themselves by the hair to November’s election. “Don’t tell anybody who told you this—especially don’t tell Joe Biden—I don’t think that there should be any debates,” she said, per NBC. Pelosi explained that her…

The time has come to say these words out loud without hesitation: Benjamin Netanyahu wants to bring about a civil war that will lead to the murder of policemen, of young and old protesters and innocent civilians who happen to be in the vicinity of where demonstrations are taking place. He’s hoping the violence is as brutal and bloody as possible… However, I was hoping that at some point during his fight to survive he would show restraint that would define the boundaries of the public struggle, but I was wrong. It turns out that Netanyahu’s wounded soul has crossed every boundary. Our prime minister is suffering from a psychotic anxiety attack. He lives in fear he will fall from the high peaks where he feels like he belongs down into an abyss of humiliation and defeat, which at the end of the day will bring him to a place where he will need to account for all of the terrible things he’s done.

Today, I have the moral right to express these difficult words: Netanyahu wants blood. The real blood of citizens and of police officers. He is an expert in generating incitement, in causing strife and fostering factionalism. This is the path he took during his first campaign for prime minister, over the body of the late prime minister Yitzhak Rabin.

It’s not going to end well. The future of the State of Israel is at stake. The stability of its institutions are being brought into question and the basic rules of the game are being undermined, without which there is not possibility for hope.

We are moving so close to the point of no return when it will no longer be possible to control what’s happening on the streets.

Despite a week of violent threats from police and armed militias, the residents of Kenosha, Wisc., turned out for a fourth straight night of protests in response to the police shooting of Jacob Blake, a 29-year-old Black man who was shot seven times in the back as he tried to enter his car on Sunday night.

Speaker Nancy Pelosi (D-Calif.) said Thursday she doesn’t think there should be any presidential debates ahead of the November election, arguing Democratic presidential nominee Joe Biden shouldn’t “legitimize” a dis…

You know why conservative white America hates the Black Lives Matter movement so much? It’s because the movement undermines business-as-usual America. And by “business,” I mean this nation’s most profitable enterprise: racism. Why else would anyone—especially law enforcement or any media outlet—go out of their way to…