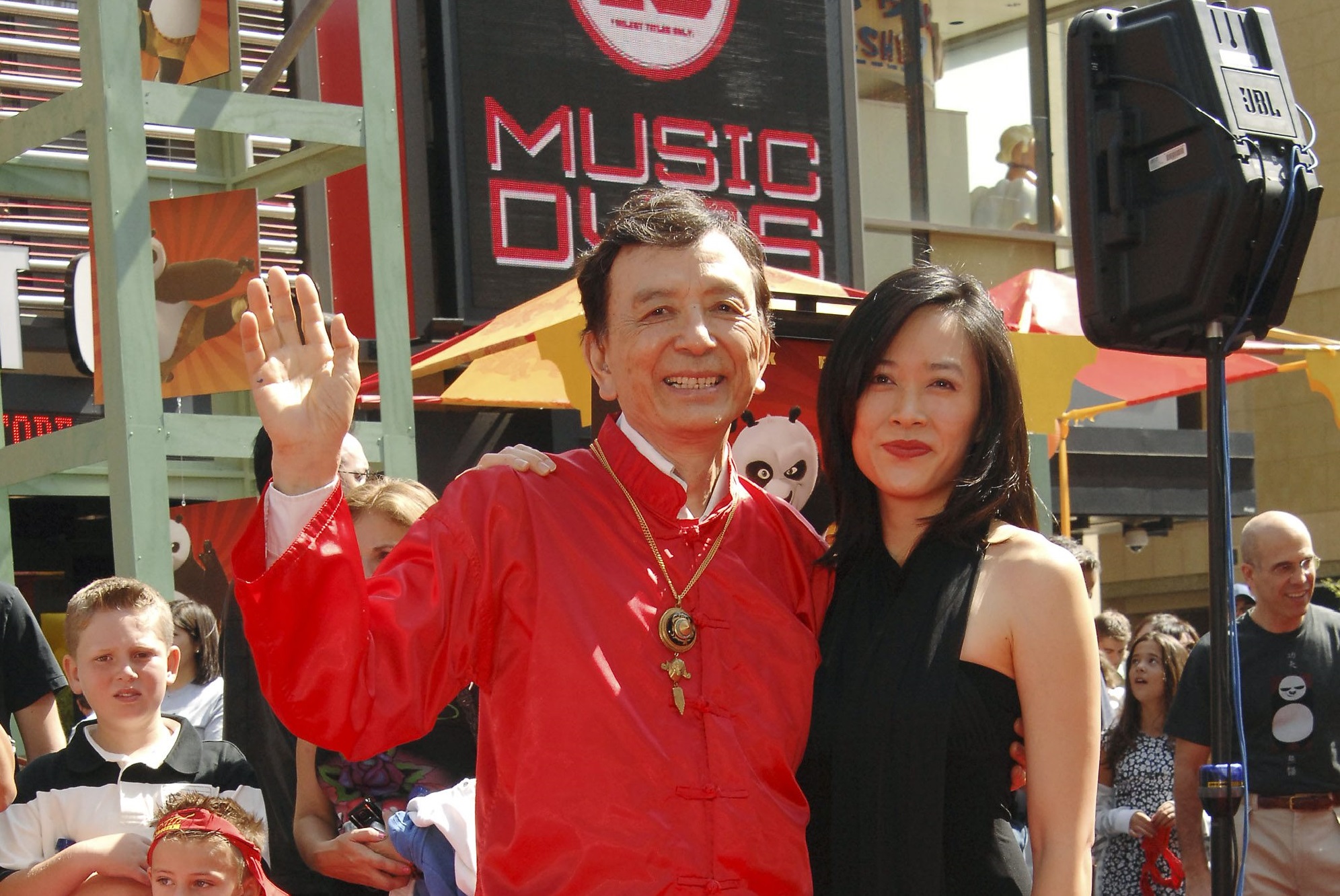 You might not recognize Hong by name, but there’s no doubt you’ve seen him on the screen. With over 600 credits and counting, Hong is one of the most prolific actors in history.

The up-and-down pattern of reports of new COVID-19 cases in Orange County continued on Saturday. The latest compilation from the Orange County Health Care Agency is 493, up from 372 on Friday. There were 14 deaths, though, a decline from 26 the day before. The new to-date case total is 45,801, of which 37,241 are […]

“If Postmaster General DeJoy cannot do his duty to the American public, and military families like mine, that he should be removed from his post,” Egan said at a press conference Friday alongside U.S. Sen. Richard Blumenthal (D-Conn.).

Well pass it jerk, you have held everything else that would help Americans – so pas this and then the relief checks and out of work help!

I was a mail carrier in Kentucky. Rural America needs the United States Postal Service, and yet the president’s administration keeps attacking it.

When I worked as a rural mail carrier in the hills of southeastern Kentucky in the early 2000s, my route snaked along the most mountainous parts of the county. I forded creeks and climbed steep dirt roads. Sometimes I’d have to drive for five miles to get to the next house. I delivered everything, including cages full of baby chickens and new sets of tires. I saw the joy that a parcel of books, clothing, or music brought to people. For so many on my route, the United States Postal Service was a lifeline, the way they got their medicine, checks, and much more.

In Tennessee, folks tell me that their prescriptions are up to two weeks late. One woman in the coalfields of Virginia told me that her son’s Social Security check was more than three weeks late. Rural Wisconsinites have been fighting the delays. In Montana, the governor got involved to stop the USPS from removing collection boxes.

Source: ​​​​​​​Trump Shows How Little He Cares for His Most Fervent Defenders – The Atlantic

Yemelyanov said he would never force people to disperse, let alone hit them, even if he were ordered to do so — whatever the consequences. “I was warned that I would be fired in disgrace,” he said. “So I handed in my ID and said I wouldn’t be coming in anymore.” Yemelyanov said he had never been involved in breaking up peaceful protests and that the police in Novopolotsk had not joined their counterparts across Belarus in using violence or weapons when making arrests. He said such action had been taken only by security forces from elsewhere who had been deployed in the city.

Five of Yemelyanov’s colleagues resigned after he did. “I heard that my superiors are saying I was bought by ‘Europe’ and that it was all just a PR stunt by me to make money,” he said. “I am scared both for myself and my family. If the present government stays in power, I could have problems.”

The new documents being released by the Committee today are part of a “PMG Briefing”—a presentation prepared directly for the Postmaster General last week, on August 12, 2020.  They provide a detailed assessment of service performance trends over the past year.

According to these documents, there has been a significant drop in service standards across the board since the beginning of July—including in First-Class, Marketing, Periodicals, and Priority Mail.

“It’s way too little, way too late,” Samantha Follows said. “This administration has just proven to me that they’re not really trustworthy.”

Follows and about two dozen others protested outside their local post office — Griffith Station in Atwater Village — one of hundreds of demonstrations across the country Saturday against DeJoy and the Trump administration. 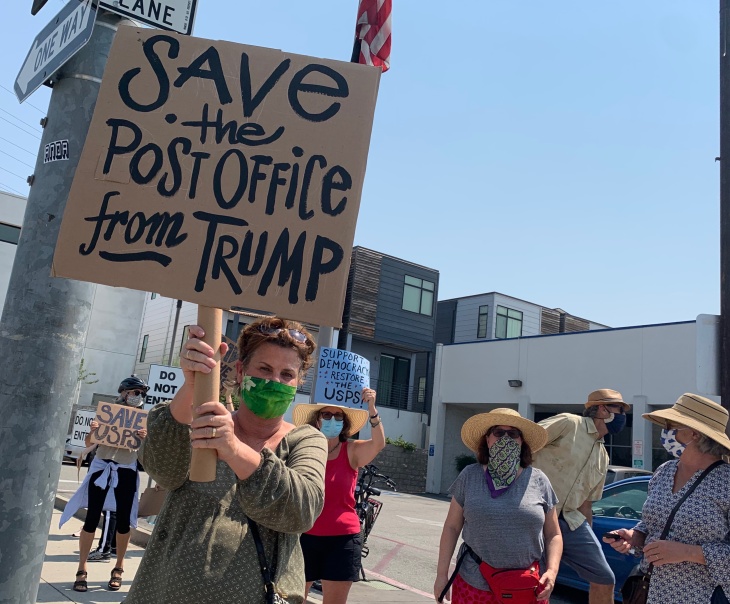 Brigid LaBonge, the daughter of a mail carrier, helped to organize Saturday’s protest outside the post office in Atwater Village. (Josie Huang/LAist)

Our news is free on LAist. To make sure you get our coverage: Sign up for our daily coronavirus newsletter. To support our nonprofit public service journalism: Donate now.

Facing an intense backlash over his cost-cutting measures at the Postal Service, Postmaster General Louis DeJoy has said he will suspend further reductions until after the November election, and he insists ensuring the timely delivery of mail-in ballots is his “sacred duty.”

But that was cold comfort to Samantha Follows of Silver Lake, who stood in 96 degree heat this morning to call for DeJoy’s resignation.

“It’s way too little, way too late,” Samantha Follows said. “This administration has just proven to me that they’re not really trustworthy.”

Follows and about two dozen others protested outside their local post office — Griffith Station in Atwater Village — one of hundreds of demonstrations across the country Saturday against DeJoy and the Trump administration. 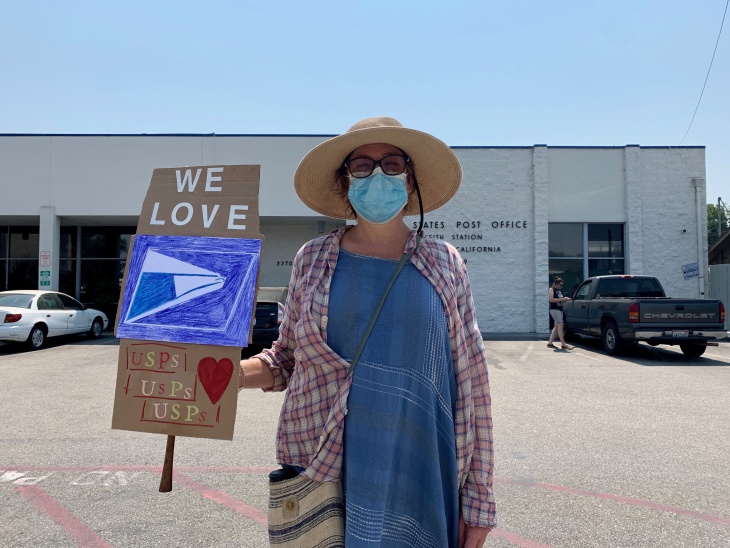 Samantha Follows of Silver Lake said she was protesting on behalf of her daughter, who depends on the mail for her cystic fibrosis medication and will be casting her first-ever vote by mail. (Josie Huang/LAist)

Hundreds of mail-sorters and public collection boxes have been removed as part of DeJoy’s trims, and in Congressional testimony Friday he said they won’t be returned to use, insisting, “they’re not needed.”

Critics fear those moves will slow the processing of mail-in ballots for an election only 73 days away.

Follows said she was protesting for her 20-year-old daughter, who she feels stands to be among the people potentially affected by DeJoy’s policies. Her daughter depends on the mail to get medications for cystic fibrosis, and because of her chronic illness, she will also need a mail-in ballot to take part in her first election.

“This kind of thing to be taken away from everyday citizens is truly sad,” Follows said.

The protests were organized by MoveOn, the NAACP, SEIU, and other groups.

The protest in Atwater Village was led in part by Brigid LaBonge of Silver Lake, the wife of former City Councilman Tom LaBonge.

LaBonge, who said she’s the daughter of a 25-year mail carrier, called the postal service “an institution.” Steeped in politics for decades because of her husband’s career, LaBonge said the cutbacks to the postal service are unlike anything she’s ever witnessed.

“I’ve never been more passionate about what’s right for our country and this is wrong, this is absolutely wrong,” she said.

LaBonge said she has already noticed delays in service. A poster she ordered from Kentucky took five weeks to arrive, and “our mail came at 8:15 last night, the latest our mail’s ever come,” she said. 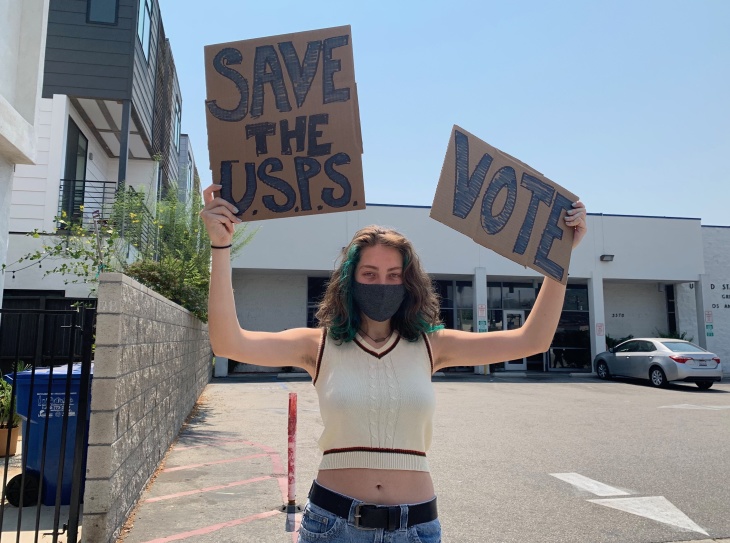 Another protester Chloe Hoffman, 17, said she was too young to vote.

“But what I also can’t do is stand by and watch the president of our country, who is supposed to protect our democracy, dismantle a way [to vote] for people who wouldn’t otherwise be able to vote,” she said.

Throughout Southern California, protesters tweeted photos from outside their post offices.

%23SaveThePostOffice #SaveThePostOffice Back from my driveby protest. A BIG thank you to all the “protectors” at the post office at UC Irvine! I’d be there if I wasn’t compromised pic.twitter.com/kUlUL76py4

.#SaveThePostOffice you don’t mess with our mail. Proud of everyone in San Pedro who stands up for what’s right. pic.twitter.com/tBTQJ4kT6j

Because current tests cannot determine if someone is immune, the society said, they “cannot inform decisions to discontinue physical distancing or lessen the use of personal protective equipment.” Antibody testing generally should be used only for population surveys, not for diagnosing illness in individuals, the panel said. But its guidelines described two situations in which antibody testing could be used when the normal diagnostic tests for the virus — called PCR tests — failed or were likely to fail.

The couple had sued New York State, demanding to have a 175-person reception indoors. (self-delusion is also epidemic) 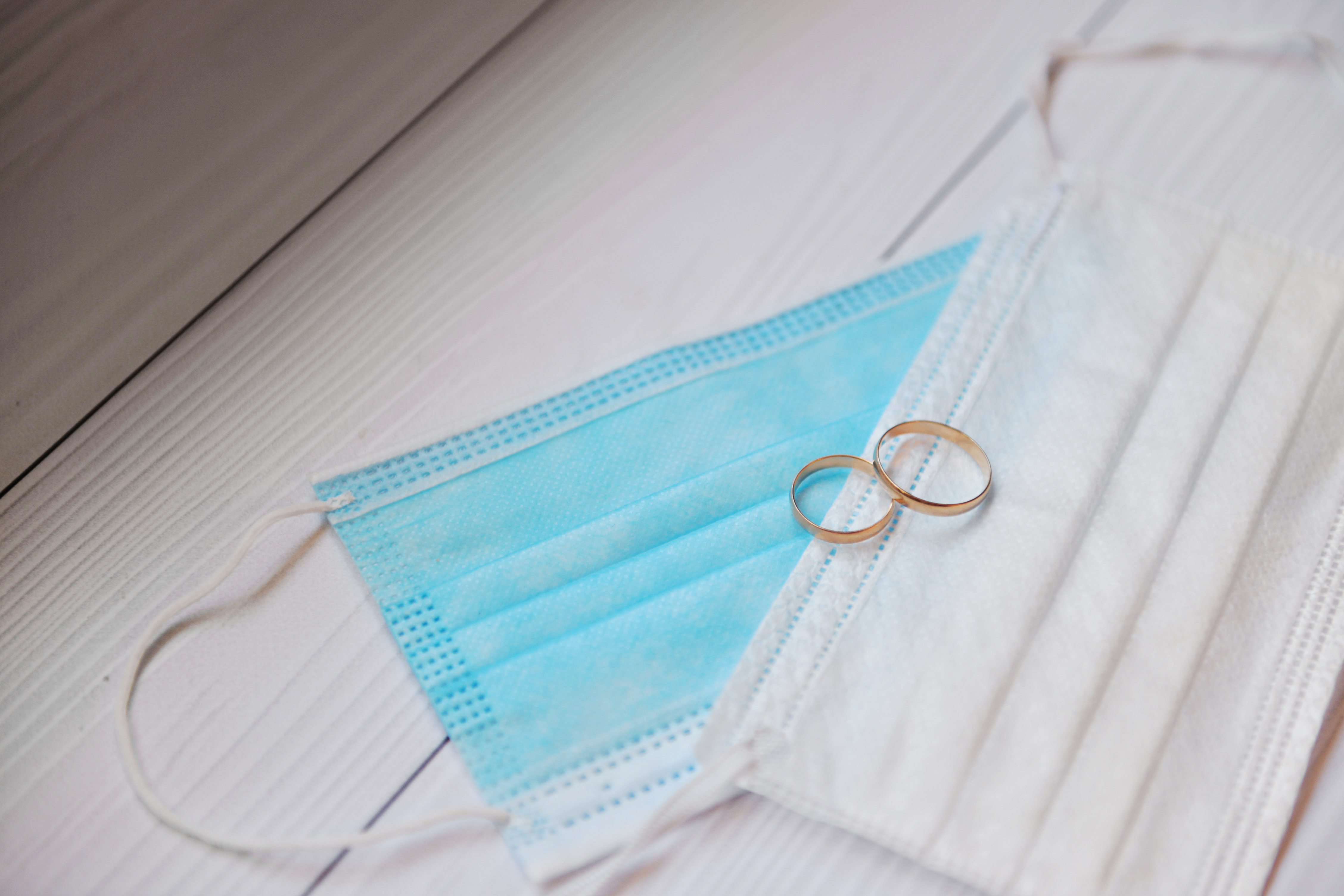 The couple had sued New York State, demanding to have a 175-person reception indoors. [ more › ]