“Mexico was offered at least 2,000 doses of the vaccine to do its protocol to start testing it in Mexico, which is very good news because again we buy ourselves time,” said Mexican Foreign Minister Marcelo Ebrard.

Early this morning, the Ministry of Health and Wellness informed us that two more communities in the eastern parish of St. Thomas have been placed under quarantine: one is the rather pleasant rural area of Albion, on the way to Yallahs. There is a gated community there, called Albion Estate. The other community is Seaforth, where there is a high school and quite a busy community. Please see the Ministry’s release below:

KINGSTON, Jamaica. Thursday, August 20, 2020. With the continued increase in the number of COVID-19 cases in St. Thomas, the decision has been taken to put additional communities within the parish under quarantine.

The communities are Albion and Seaforth that have seen 13 cases over the last three weeks. Many of the cases are symptomatic, which is a cause for concern and suggests that there may be ongoing transmission in the… 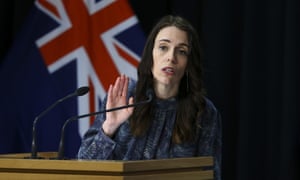 “I think anyone who’s following Covid and its transmission globally will quite easily see that New Zealand’s nine cases in a day does not compare to the United States’ tens of thousands, and in fact does not compare to most countries in the world,” she said.

How does it feel to watch family members become obsessed with Bill Gates, microchips and 5G – and is there anything you can do to help them?

Separately, fourteen states and the District of Columbia are also suing the Trump administration to review the rule and declare it unlawful. The National Transportation Safety Board and the National Association of State Fire Marshals oppose it as well.

Under the new rule, trains would be allowed to transport up to 30,000 gallons of liquified natural gas (LNG) per tank, significantly more than has ever been allowed in the U.S., and there will be no restrictions on the number of LNG tanker cars in a particular train, nor on the routes these trains may travel, so they will be free to pass through dense population centers.

A minority of people getting “red​pilled” by far-right conspiracy theories turn to ​violent action like Fulbright, but such instances have seemingly become more frequent in recent months. On April 29, a woman drove from Illinois to New York and was arrested on a pier with a dozen illegal knives in her trunk, explaining to the police that she had watched the QAnon video “Fall of the Cabal” and was inspired to take action. On June 11, a Boston man live-streamed a police chase with his wife and ​five children in the car, during which he was recorded saying “QAnon, help me. QAnon, help me.” The chase ended when the man rammed a police cruiser and crashed into a tree. There were no injuries. In early July, a woman attacked a product display in an Arizona Target store and livestreamed a later confrontation with the police, explaining to the arresting officer that she had been hired as “the QAnon spokesperson.”

​Despite such incidences and the FBI labeling QAnon a domestic threat, the president has expressed support for QAnon followers. Trump praised QAnon congressional candidate Marjorie Taylor Greene, has retweeted QAnon-affiliated accounts, and most recently spoke positively of the QAnon conspiracy theory when asked about it by NBC reporter Shannon Pettypiece during an Aug. 19 White House press briefing.

“I have heard that it is gaining in popularity,” the president said. “I don’t know much about the movement other than I understand they like me very much, which I appreciate.”

After the reporter informed the president that “the crux of the theory is this belief that you are secretly saving the world from this satanic cult of pedophiles and cannibals,” ​Trump responded by saying “I haven’t heard that, but is that supposed to be a bad thing or a good thing? I mean you know, if I can help save the world from problems I’m willing to do it. I’m willing to put myself out there. And we are really, we’re saving the world from a radical left philosophy that will destroy this country.”

I’m no Democrat. I’m a gun totin’ Texas property owner who called himself a Republican until 2016 when that title lost all meaning. Back in my school days, I was even co-president of the Young Republicans Club and supported George W. Bush’s election both times. I’m a graduate of West Point and formerly an officer in the U.S. Army. I led soldiers from the First Infantry Division into combat against the Taliban throughout 2011. To do all of that, I first swore an oath to protect this country against all enemies — foreign and domestic.

In the face of a national leader so toxic to the Republic and her people as Trump, the policy goals of his opponent become irrelevant next to the preservation of the Union. What we need right now more than anything is stable, honest leadership and serious accountability for those who’ve wronged this nation and her people. We need a President Joe Biden. The app also pulled down 64,000 comments and 1,300 accounts on similar grounds. The objectionable content reportedly included racial harassment, and denial of slavery and holocaust.

Facing questions about a mysterious series of changes to some fact-check labels, Facebook recently wrote to a group of senators with an assurance: its fact checkers can and do label “opinion” content if it crosses the line into falsehood. What Facebook didn’t tell the senators: the company draws that line, and can pressure changes to fact checks & misinformation penalties. And it does. Facebook acknowledged to me that it may ask fact checkers to change their ratings, and that it exercises control over pages’ internal misinformation strikes.