After reaching a deal for the country to manufacture a “promising” vaccine being developed by AstraZeneca and Oxford University, Morrison said getting the jab should be “as mandatory as you can possibly make it”.

“There are always exemptions for any vaccine on medical grounds, but that should be the only basis,” he told radio station 3AW in Melbourne.

The report concluded that the Kremlin “engaged in an aggressive, multifaceted effort to influence, or attempt to influence” the 2016 election, and that some Trump associates were keen on help from Russia.

It said the Trump campaign, with many affiliates who had no government experience, were easy targets for foreign influence.

The committee also highlighted the role of former Trump campaign manager Paul Manafort, who was convicted of conspiracy and fraud charges during the Mueller inquiry.

Manafort’s contact with Russian oligarchs and intelligence affiliates – namely Konstantin Kilimnik- and his access to Mr Trump “created opportunities for Russian intelligence services to exert influence over, and acquire confidential information on, the Trump Campaign,” the committee alleges.

The report confirmed Kremlin used Manafort and WikiLeaks to help Mr Trump win the 2016 election, and that WikiLeaks was aware it was assisting Russian intelligence. 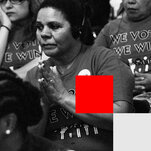 How he could win the Latino vote … and the presidency.

As it turns out, Collins is actually one of the members of Congress most responsible for the Postal Service’s devastation. Long before DeJoy started manipulating the USPS, Collins was at the forefront of a bill that crippled the agency’s finances.

In 2005, she sponsored and introduced legislation, the Postal Accountability and Enhancement Act (PAEA), that required the USPS to pre-pay the next 50 years worth of health and retirement benefits for all of its employees—a rule that no other federal agency must follow. As chair of the Senate oversight panel at the time, she shepherded the bill’s passage, along with her House GOP counterpart Tom Davis, during a lame-duck session of Congress. It passed by a voice vote without any objections—a maneuver that gave members little time to consider what they were doing.

To meet the mandate for prefunding USPS’s health and retirement benefits, the measure required the Postal Service to place roughly $5.5 billion into a pension fund every year between 2007 and 2016, followed by sizable additional payments, making it impossible for the institution to run a profit. To make it even harder for the USPS to make money, the law prohibited the agency from any new activities outside of delivering mail. In an essay for the Washington Monthly last year, New Jersey Congressman Bill Pascrell, who voted for the bill, called it “one of the worst pieces of legislation Congress has passed in a generation.” 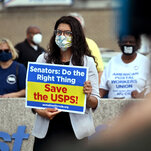 Putting on the Putin punt for autocracy! 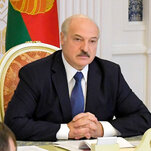 Showing no signs of yielding, President Aleksandr Lukashenko denounced a new opposition council as “wild Nazis.” The Kremlin warned European leaders not to get involved in the unrest in Belarus.

An autopsy done by Hennepin County found that Floyd had fentanyl and methamphetamine in his system at the time of his death but said that the cause of death was “cardiopulmonary arrest complicating law enforcement subdual, restraint, and neck compression,” not drugs.

Gov. Mike DeWine’s highly anticipated announcement on high school sports was made this afternoon, when he said all fall sports will be permitted to continue.

DeWine said the announcement comes with a restriction on the amount of fans, saying only family members will be allowed to attend

Hospitals in Manila remain overwhelmed and health workers are still overworked two weeks after a strict coronavirus lockdown, but a “reboot” of the official response should see infections plateauing or even going down, the government and health experts said yesterday.

Starting today, shutdown restrictions that had been in place in Metro Manila and four nearby provinces since Aug 4 will be eased.

The curbs are being lifted, even though nationwide infections continue to top 3,000 a day, and more than 500 people are reported to have died this month alone.

That is one-fifth of the total death toll.

The Philippines currently has the most number of Covid-19 infections in South-east Asia.

“Right now, we’re still receiving so many reports about how overwhelming the waiting time is at emergency departments, that (the departments) are filled to the brim and can no longer admit patients,” said Dr Pauline Convocar, president of the Philippine College of Emergency Medicine.

Four out of every five hospital beds for Covid-19 patients in the capital are already occupied, according to the Health Ministry’s daily bulletin.

President Rodrigo Duterte reimposed quarantine measures early this month in Manila and four nearby provinces – home to about 27 million or one-quarter of the country’s population – after more than 160 medical groups said the health system was on the verge of collapse.

The Philippines went through one of the longest shelter-at-home restrictions in the world, from mid-March to May.

But since emerging from the lockdown on June 1, confirmed infections in the archipelago had increased more than fivefold and surged past 160,000.

Right now, we’re still receiving so many reports about how overwhelming the waiting time is at emergency departments, that (the departments) are filled to the brim and can no longer admit patients.

That made the Philippines the epicentre of the pandemic in South-east Asia, dislodging Indonesia.

Dr Anna Lisa Lim, an infectious and tropical diseases specialist at the Philippine General Hospital, said the recent two-week lockdown probably slowed the spread of the virus and gave hospitals a “timeout”.

But that was not the main goal, she added.

“The more important, primary goal was to regroup and try to see whether there was a more concrete response to symptoms of an overwhelmed system.

“That was achieved to a certain extent. It opened up a dialogue,” she said.

She added that this led to a “reboot” in the government’s response.

This “refreshed approach” will see the government shoring up its grassroots response, so that those who fall sick do not react by going straight to hospital for treatment, she said.

Mr Duterte’s spokesman Harry Roque told reporters earlier that the government will employ pooled testing, and that contact tracers will make house calls, so that more asymptomatic cases can be found in communities and workplaces, where most clusters of infected cases are surfacing.

More community treatment and isolation facilities will be built, so that mayors and other grassroots leaders can respond more effectively as testing uncovers outbreaks in their areas, he added.

Professor Guido David, who heads a University of the Philippines’ research team that tracks Covid-19 statistics, said that if the government follows up on the changes in its pandemic response, the Philippines could soon see a “flattening” of Covid-19 cases.

He also said the R-naught, which describes the virus’ infection rate, had fallen from 1.5 last month to just 1.1 this month. If it falls below 1, “that means we’ve flattened the curve”, he added.

But Dr Benjamin Co, an infectious diseases specialist, said the R-naught alone could not be used as a metric.

Apart from keeping it below 1, cases should also drop to just 200 a day from a current average of more than 3,000, and the proportion of those testing positive should slide to 5 per cent, he added.

“Only when we achieve those and sustain it for at least 14 days can we call it a victory,” he said.