There is no escaping from the trauma in Beirut. Hospitals inundated with victims of the explosion are now filling with protesters injured by the security forces.

Firas Hamdan told me he was out on the streets protesting last Saturday, and while filming a live broadcast on Facebook he was almost killed.

Testing for the coronavirus that causes COVID-19 has dropped nationwide the past two weeks even as the evidence builds disease spread is picking up in many states. Nowhere is the danger of the testing slowdown more evident than the South. In Mississippi, more than one in five tested for the virus in the past week were positive, the highest rate in the nation as of Friday. The average number of daily tests in Texas and Florida dropped, but the ratio of positive tests in each state is more than double what the World Health Organization recommends.  Official case counts have dropped nationally but reporting problems and generally reduced testing in some states makes it hard to place any confidence that infection rates are improving. And in some states with more reliable data, testing slowdowns coincide with increasing or stable positive rates.

L.A. schools Supt. Austin Beutner outlined the plan in an opinion article in the Los Angeles Times published Sunday, saying “the goal is to get students back to school as soon as possible while protecting the health and safety of all in the school community.”

Beutner said the district hopes to be able to test all students and staff as part of a partnership that includes UCLA, Stanford and Johns Hopkins University, Microsoft, Anthem Blue Cross and HealthNet, among others. He said the testing would cost roughly $300 per student over a year.

Kelly also posted a series of Instagram Stories depicting the scene at the hospital where she is currently being treated, as well as several shots of herself lying in her hospital bed.

“You don’t want to be here not being able to breathe,”she wrote, also thanking the hospital employees for their dedication. “Would you be scared? Or is this still a f*****g liberal hoax? I hope no one you love has to gasp for air.”

Source: Sharon Stone asks for prayers for sister who has COVID-19: ‘One of you non-mask wearers did this’

Pentagon officials working on Defense Secretary Mark Esper’s cost-cutting review of the department have proposed slashing military health care by $2.2 billion, a reduction that some defense officials say could effectively gut the Pentagon’s health care system during a nationwide pandemic.

The proposed cut to the military health system over the next five years is part of a sweeping effort Esper initiated last year to eliminate inefficiencies within the Pentagon’s coffers. But two senior defense officials say the effort has been rushed and driven by an arbitrary cost-savings goal, and argue that the cuts to the system will imperil the health care of millions of military personnel and their families as the nation grapples with Covid-19. 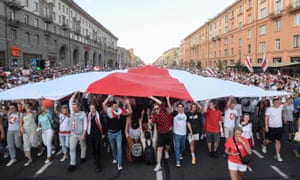 As many as 100,000 people attend biggest protest in country’s history in defiant and euphoric mood

Source: A titanate nanowire mask that can eliminate pathogens – EPFL

The Belarusian ambassador to Slovakia has broken rank to declare solidarity with protesters in Belarus following the country’s disputed presidential election.

“I stand in solidarity with those who came out on the streets of Belarusian cities with peaceful marches so that their voice could be heard. The Belarusians have achieved this right through suffering,” Igor Leshchenya said in a video posted by Nasha Niva media on Saturday.