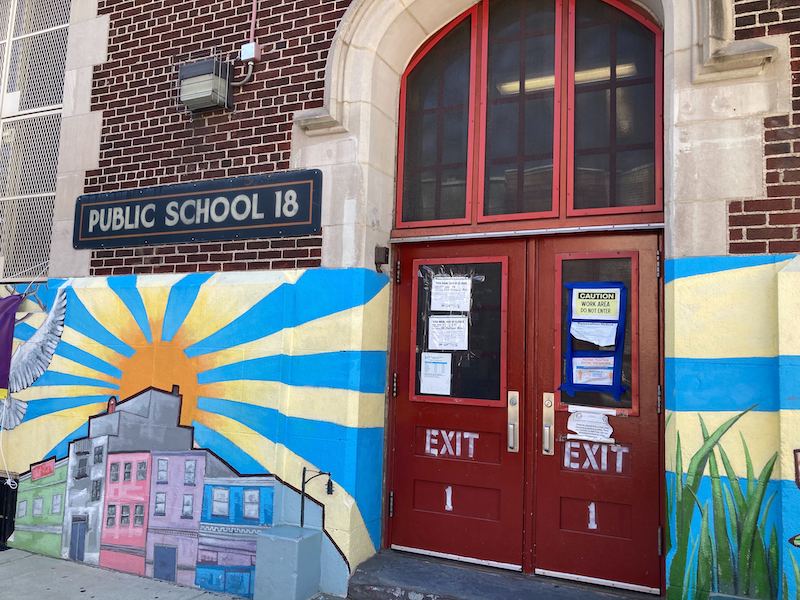 The sobering details in newly released city plans show just how different school will look for students who return this fall to the country’s largest school district. [ more › ]

The H&M Group is now apologizing to its employees and the public for a photo it recently discovered in the internal systems of one of its clothing companies, & Other Stories, which reportedly labeled one of its hats as “Nxxxx Lab Beanie.”

“We are deeply sorry about the word connected to an image of a product that was sent out to our stores during July,” Managing Director Karolina Gutke wrote in a memo to & Other Stories’ employees recently, reports CNN. “This is completely unacceptable and there is no excuse [as] to why this happened.”

H&M Group confirmed the slur appeared on a list in July of all the clothing items and accessories to be sold for the upcoming Fall/Winter season. The list was uploaded to an internal system and under each product was the internal name of the item — a kind of codename used only by the company. The captions are created and uploaded by design and buying teams — and have to be approved by multiple people before they hit the server, the employees said.

Mississippi Today reports that 42-year-old Nacoma James, a Black man, died on Thursday while self-quarantining after displaying symptoms of COVID-19. James was a teacher at Lafayette Middle School and an assistant high school football coach. While students and teachers returned to the school earlier this week, James remained at home. “No one has told me officially that he had COVID, but I do know he was self-quarantining this week,” Adam Pugh, the district’s Superintendent, told Mississippi Today.

Giuliani told the Washington Post earlier this summer that Derkach “doesn’t seem pro-Russian to me.” In case that ruse was fooling anybody, U.S. intelligence has now officially described Derkach as an organ of Russian political interference.

Meanwhile, Senate Republicans on the Homeland Security Committee are holding hearings in an attempt to substantiate this charge — or, more realistically, to insinuate it. They have produced no evidence to advance their charge. The Russians have given Republicans stolen tapes of secret conversations Biden held with Ukrainians during his tenure as vice-president, and pro-Trump media outlets have hyped up the material, but nothing they have is inconsistent with the narrative that mainstream news organizations found. Biden was working to clean up Ukraine.

Senate Republicans tried to be cagey about their activities. After pro-Russian Ukrainians said they’d passed materials on to Republican officials, a Johnson staffer told NBC News in July that it was “‘false’ the committee has received any ‘oppo,’ or opposition research, without responding directly to whether that covers any materials from foreign sources.”

“The problem with demanding a negative test is these PCR tests will pick up just particles, so it could be dead virus,” he said, “and the CDC has seen people test positive for up to 12 weeks. Obviously, you only carry live virus for a very short period of time.”

His comments come after the Florida Department of Health reported another 7,686 new COVID-19 cases statewide, marking nearly a week with under 8,000 daily reported cases.

“There is no evidence that these men had any intention to join the demonstration in Oakland as some as the media have asked. They came to Oakland to kill cops,” said John Bennet, the agent in charge of the FBI’s San Francisco division, according to CBS News.

“Pope Francis has given us a great definition of what pro-life means,” Stowe said. “He basically tells us we can’t claim to be pro-life if we support the separation of children from their parents at the U.S. border, if we support exposing people at the border to COVID-19 because of the facilities that they’re in, if we support denying people who have need to adequate health care access to health care, if we keep people from getting the housing or the education that they need, we cannot call ourselves pro-life.”

Pope Francis questioned Trump’s pro-life stance in 2017 when the president tried to end DACA, a federal immigration program that offered protections to some people who were brought to the United States illegally as children.

“I have heard the President of the United States speak,” the pope said at the time, according to the National Catholic Reporter. “He presents himself as a pro-life man. If he is a good pro-lifer, he should understand that the family is the cradle of life and you must defend its unity.”

A massive hack has hit Reddit today after tens of Reddit channels have been hacked and defaced to show messages in support of Donald Trump’s reelection campaign.

The hacks are still ongoing at the time of writing, but we were told Reddit’s security team is aware of the issue and has already begun restoring defaced channels.

A partial list of impacted channels (subreddits) is available below. This includes Reddit channels for the NFL, many TV shows, The Pirate Bay, Disneyland, Disney’s Avengers, several city channels, and more. Combined, the channels have tens of millions of subscribers.

“That’s a nonstarter,” Secretary of the Treasury Steven Mnuchin said in response. Congressional Republicans have made offers closer to $1 trillion.

Trump argued Democrats had asked for extra money for “poorly run Democrat cities and states” for expenses unrelated to the coronavirus. Democrats and some Republicans have said aid for local governments is needed amid a financial crunch sparked by the pandemic to ensure vital services like police and firefighters are able to continue operating.

The greater than trillion-dollar gap remaining between the parties includes their disagreement on the continued unemployment benefits. Congress created a $600-a-week additional payment for the jobless earlier this year, but was unable to find a deal to extend the payments after they expired at the end of July.

The two sides also remain apart on how school funding should be disbursed. Pelosi told reporters the White House wants the money to go largely to schools that reopen; Democrats want the aid to also fund schools that are unable to reopen and must spend to launch and implement distance learning programs.