HANOI (REUTERS) – Vietnam ratified a free trade agreement with the European Union on Monday (June 8) that will cut or eliminate 99 per cent of tariffs on goods traded between the Southeast Asian country and the bloc, and provide Vietnam with a much-needed post pandemic boost.. Read more at straitstimes.com.
— Read on www.straitstimes.com/asia/se-asia/vietnam-ratifies-free-trade-deal-with-eu 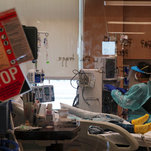 Hospitals are airlifting patients to facilities hundreds of miles away to handle an influx of Americans and U.S. green card holders sickened in Mexico.

She said the protests had attracted so many allies — including first-time activists — in part because of the coordination among coalition groups and the fact that statements released by workplaces affirming the movement had made people feel more comfortable about getting involved. The high-profile deaths of several black people at the hands of police in a matter of weeks has convinced many of a systemic problem, Stevenson said, adding that the shared vulnerability to the coronavirus may have also worn down barriers between people.

Vladimir Putin will celebrate the fact that NATO leadership is sowing division within its own ranks. The Russian president could not wish for a better counterpart in Washington than Trump, who is incompetent when it comes to military strategy. Putin will happily do everything he can to drive a wedge NATO members.