Are you finding yourself alone in this mixed up world of CoVid 19? Worries swirl about your head for yourself, family, the world.

“This is my comfort in my affliction, For your word has given me life.”

Hang on to the two words Comfort and Affliction that form a parenthesis around the word and very presence of affliction. Trials and afflictions (doubts and pains) may not be nullified, but they are cushioned by the faithful Word of God.

Please take heart today. He is always there.
Inspired by a fellow blogger’s post: a prayer and a flower. 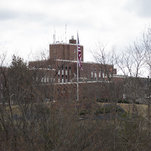 Inside the Holyoke Soldiers’ Home was a man who had served as a jailer to Hitler’s top aide. A man who had rescued Japanese kamikaze pilots from the sea. A man who carried memories of a concentration camp.

Our estimates suggest that the epidemic is not under control in much of the US: as of 17 May 2020, the reproduction number is above the critical threshold (1.0) in 24 [95% CI: 20-30] states. Higher reproduction numbers are geographically clustered in the South and Midwest, where epidemics are still developing, while we estimate lower reproduction numbers in states that have already suffered high COVID-19 mortality (such as the Northeast). These estimates suggest that caution must be taken in loosening current restrictions if effective additional measures are not put in place. We predict that increased mobility following relaxation of social distancing will lead to resurgence of transmission, keeping all else constant. We predict that deaths over the next two-month period could exceed current cumulative deaths by greater than two-fold, if the relationship between mobility and transmission remains unchanged. Our results suggest that factors modulating transmission such as rapid testing, contact tracing and behavioural precautions are crucial to offset the rise of transmission associated with loosening of social distancing.

Mike Pompeo said while he was not aware of the detail of Victoria’s agreement, he warned it could impact his nation’s Five Eyes intelligence-sharing partnership with Australia.

the supposed “freedom” to work is a cruel joke when people are forced to choose between putting food on the table or risking their lives. It’s the same perverse ideology that put workers in harm’s way in the dawn of the industrial age, when robber barons demanded workers be “free” to work in dangerous factories 12 hours a day.

In truth, there is no good reason to reopen when the pandemic is still raging: not getting the economy moving again, or workers clamoring to return to work, or the cost of extended income support, or because workers should be “free” to endanger themselves.

Let’s be clear. The pressure to reopen the economy is coming from businesses that want to return to profitability, and from Trump, who wants to run for re-election in an economy that appears to be recovering.

Neither is reason enough.

Source: Whatever Trump says, Americans are not dying to work – work may cause them to die | Robert Reich | Opinion | The Guardian