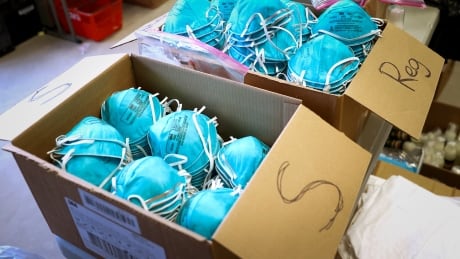 Researchers at the University of Saskatchewan say they successfully decontaminated a small batch of N95 respiratory masks for reuse last week. The decontamination process could be used to create an emergency backup of PPE in hospitals.

As Wisconsin scrambled to expand voting by mail for its election on Tuesday, many absentee voters said their ballots went undelivered.
— Read on www.nytimes.com/2020/04/09/us/politics/wisconsin-election-absentee-coronavirus.html

European finance ministers have agreed to a post-crisis economic recovery plan opening the door to jointly issued debt, France’s finance minister said on Thursday, hailing what he described as a French success.
— Read on www.reuters.com/article/us-health-coronavirus-eu-france/france-says-eu-recovery-fund-to-be-financed-by-joint-debt-idUSKCN21R3G8

A famously traditional community has mobilized to help hospitals with medical supplies, even as it struggles with reconciling its communal way of life with the dictates of social distancing.
— Read on www.nytimes.com/2020/04/09/us/politics/amish-coronavirus-ohio.html

Hospitals have warned, disciplined and even fired staff members who went public with workplace concerns about coronavirus precautions.
— Read on www.nytimes.com/2020/04/09/business/coronavirus-health-workers-speak-out.html

Homemade masks may capture respiratory droplets, but no evidence shows they filter out aerosols, a new report says.
— Read on www.cidrap.umn.edu/news-perspective/2020/04/data-do-not-back-cloth-masks-limit-covid-19-experts-say

The northern islands of the Pacific nation were hit by a category-5 cyclone on Monday, flattening buildings, cutting power and stripping trees
— Read on www.theguardian.com/world/2020/apr/10/its-all-gone-cyclone-harold-cuts-a-deadly-path-through-vanuatu

(Own report) – At the euro finance minister’s video conference the German government blocked the introduction of “coronabonds,” in spite of massive pressure from other EU nations and recently even from within Germany. Whereas mainly Italy, Spain and France had insisted that this measure be taken, voices are now being raised from within the German establishment warning that the German government should stop blocking its implementation. The reason, as leading Green Party politicians are explaining, is that should Italy and Spain suffer economic collapse, Germany’s export industry would be seriously damaged by the loss of these important markets, and – should German assistance be refused – both countries could turn to China. This must be prevented. The “coronabonds” will cost Germany, however, specialists estimated years ago that the costs would be in the lower double-digit billions, while Germany is simultaneously reaping triple-digit billions in profits – annually.
— Read on www.german-foreign-policy.com/en/news/detail/8243/

Unemployed Californians will soon get an extra $600 in weekly jobless benefits from a federal stimulus package, but a deluge of new claims amid the coronavirus crisis has the state struggling.
— Read on www.latimes.com/california/story/2020-04-09/california-unemployment-benefits-payments-coronavirus-stimulus

British Prime Minister Boris Johnson has not had any contact with his deputy, Foreign Secretary Dominic Raab, since he stepped in to fill Johnson’s role, Raab said on Thursday, adding that he has enough power to make key decisions without his boss.
— Read on www.reuters.com/article/us-health-coronavirus-britain-raab/uks-raab-says-he-has-not-spoken-to-johnson-since-taking-over-idUSKCN21R3AP