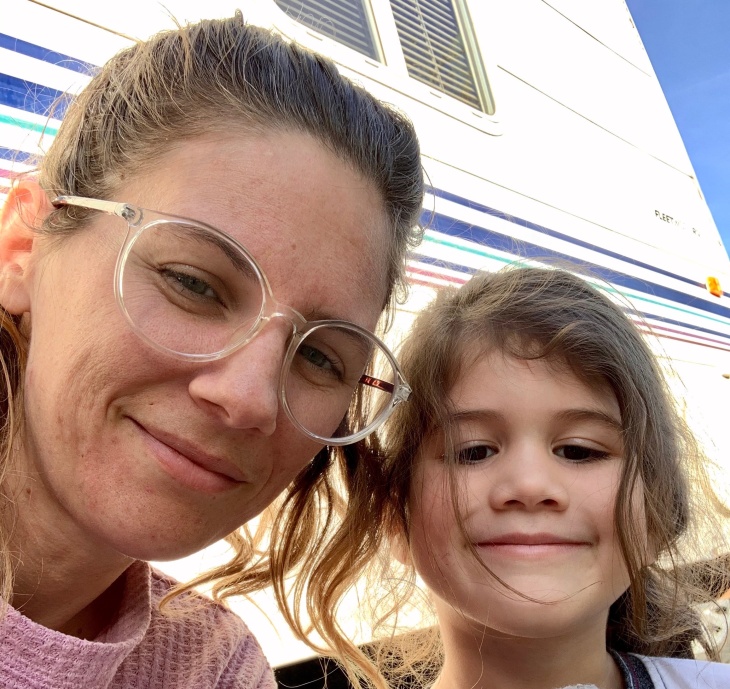 Presley Wilson and her four-year-old son, Raiden, outside of her mobile home in Pomona’s California Trailer Grove. (Presley Wilson)

Presley Wilson is a single mom of a four year-old, who lives in a travel trailer in Pomona. “It’s 26 feet, and with two people and two dogs. And so it’s packed,” she told me by phone earlier this week.

Wilson drives for Lyft as her main source of income. Her bank account rises and falls with her ability to drive — something she said she lost when the coronavirus arrived in California.

That’s because Wilson is chronically ill, with two syndromes affecting her blood circulation. They can also exacerbate other illnesses:“It’s dangerous for me to get sick because I get super, super sick,” she said.

She stopped driving in February, worried that picking up passengers at LAX might expose her to COVID-19.

No income meant she didn’t have rent for March. And so, on March 17, the “three day notice to pay rent or quit” arrived at Wilson’s door. It detailed the hole Wilson found herself in — she owned $625 in rent for this month, along with another $132.47 in electricity, water, sewer and trash bills. 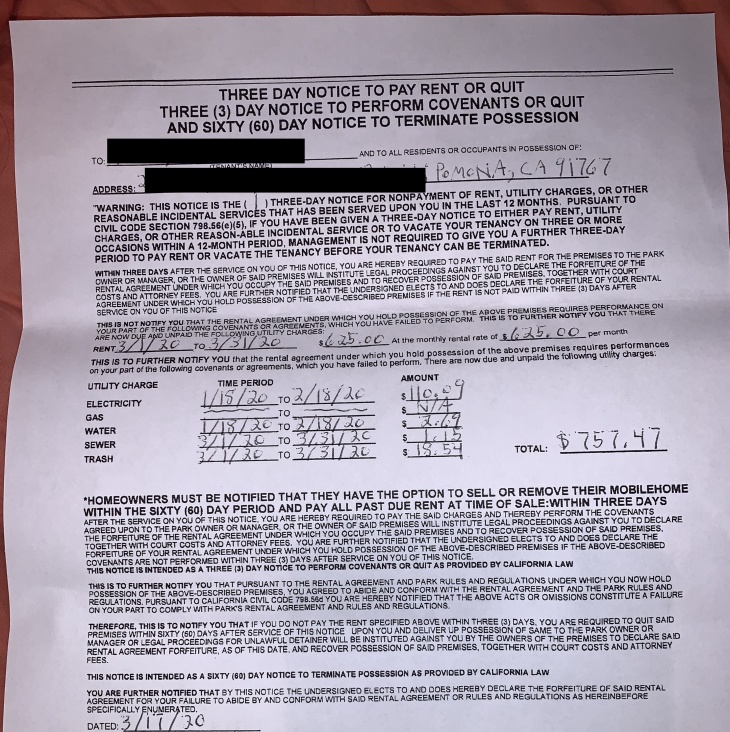 “It’s pretty damn scary, especially when you have a kid,” Wilson said.

Normally, she’d get help from a county program called Emergency Assistance to Prevent Eviction, which helps families on CalWORKs pay rent and utilities.

But the Department of Public Social Services had closed its offices the day before, and Wilson said she wasn’t able to reach anyone there.

And so she found herself self-isolating in her trailer, facing eviction during a pandemic, as a chronically ill person.

“At this point, I’m just waiting on the federal government and hoping,” Wilson said. “I mean, there’s millions of us in this state alone that are not going to be able to pay our rent.”

She said she was hoping to avoid homelessness; her next destination would be her car.

The plight of renters like Wilson has been on the mind of policymakers across California and the nation as the coronavirus pandemic has taken hold. With the economy grinding to a halt, unemployment claims are surging, and many tenants will not have the money to make rent on April 1.

Several measures could give renters a temporary break — but the fast-changing environment is also causing confusion.

On March 16, Governor Gavin Newsom issued an order that authorized local governments to halt evictions. But the order simply allowed cities and counties to impose eviction moratoriums, and didn’t itself stop evictions anywhere.

Before the governor’s action, Los Angeles Mayor Eric Garcetti had issued an eviction moratorium in the city of L.A. for residential tenants “able to show an inability to pay rent due to circumstances related to the COVID-19 pandemic.” That meant that some other types of evictions, including for breaking the terms of a lease, could continue. Garcetti later followed up with moratoriums on commercial and Ellis Act evictions.

Some smaller jurisdictions, including the cities of Inglewood, Palm Springs, and El Monte, have imposed their own eviction-halting measures. And many others, including Presley Wilson’s home city of Pomona, have no moratorium.

Then there’s the court system.

In many places, eviction cases aren’t moving forward because courts are closed. That includes the Los Angeles Superior Court, where presiding judge Kevin C. Brazile suspended all civil, criminal and unlawful detainer trials until June 22, due to the pandemic. 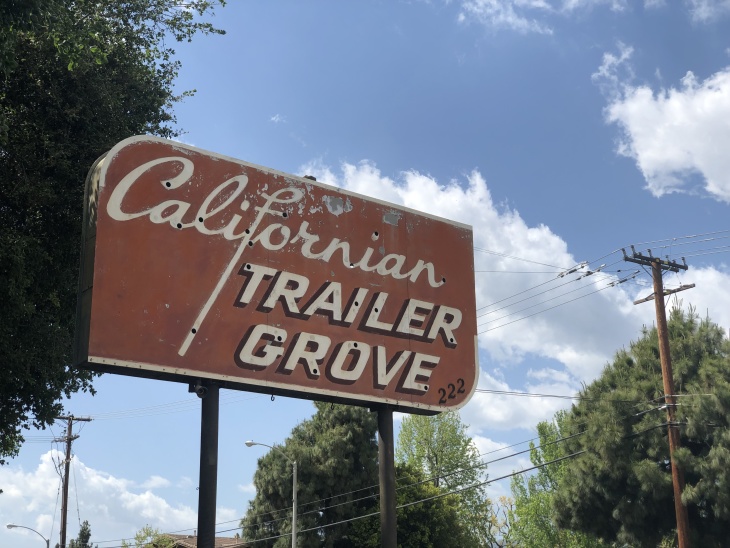 “Everything is getting continued, which is kind of a silver lining to this,” said Javier Beltran of the Legal Aid Foundation of Los Angeles, which represents low-income tenants. Beltran told me he still worries about “informal evictions” that don’t go through the court process.

He added that tenants who lose work in the informal economy — like street vendors, or workers paid under the table — will have a hard time proving their incomes were impacted by COVID-19.

At the same time, the coming weeks and months will put incredible pressure on landlords, said Daniel Yukelson of the Apartment Association of Greater Los Angeles. The court closures, in particular, shift the balance of power.

“It creates basically open hunting season on landlords, you know, from tenants who just don’t want to pay their rent. There’s no leverage,” Yukelson said.

His group is telling members to work with their tenants, and even consider deferring rent. “We are stressing that owners be patient, and that they keep an open line of communication with renters,” he said, adding that renters and property owners will both need government assistance in the coming months.

If a renter doesn’t pay for 90 days, Yukelson said, “for a small owner, that could be devastating. They could easily and quickly be in default on their mortgage.”

The statewide picture could become clearer — if a bill introduced by San Francisco assemblymember Phil Ting becomes law. The measure seeks to create a statewide eviction moratorium. But it won’t be as simple as a vote: State legislators are currently on an unprecedented recess due to COVID-19.

EVICTIONS DURING A CRISIS

Presley Wilson’s mobile home park is owned by entities connected to mega-landlords PAMA Management and Mike Nijjar, subjects of a KPCC/LAist investigation. Their real estate empire spans an estimated 16,000 units and over $1.3 billion in real estate across California.

Businesses connected to PAMA and Nijjar are known for fast and frequent evictions: KPCC/LAist tallied more than 4,300 eviction lockouts in Los Angeles and San Bernardino counties between 2010 and 2018. 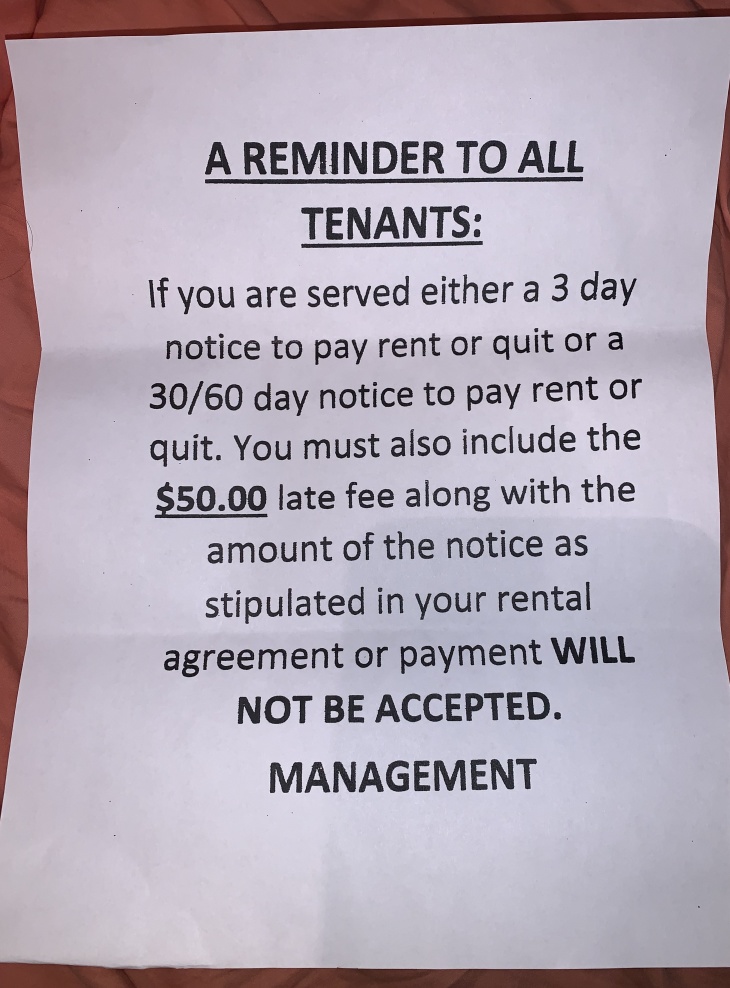 A late fee notice from the California Trailer Grove in March, 2020. The park is owned by an entity connected to Mike Nijjar and PAMA Management.

Mike Nijjar, Mobile Management Services, and PAMA Management’s attorneys, did not respond to a request for comment for this story.

PAMA’s eviction process is systematized: management handbooks reviewed by KPCC/LAist included an eviction calendar, showing when to file, and an eviction flowchart, laying out the process.

In 2012, PAMA used several law firms to file for approximately 140 evictions per month, former PAMA executive Everet Miller testified during one of many lawsuits the company has faced.

PAMA is aware of how high the stakes are for renters facing eviction.

“Many of our tenants live literally paycheck to paycheck; it doesn’t take much to push them over the edge,” Miller testified in 2011. Still, he said, “We can’t be aggressive and send out Guido with a baseball bat and break their kneecaps. The system is the system.”

In the wake of the previous recession, evictions jumped — not just at properties connected to PAMA, but all around Southern California. KPCC/LAist reviewed data on eviction lockouts, the very final step of the eviction process. In Los Angeles County, there have been more than 153,000 eviction lockouts since 2010, a period that covers the recovery from the Great Recession. 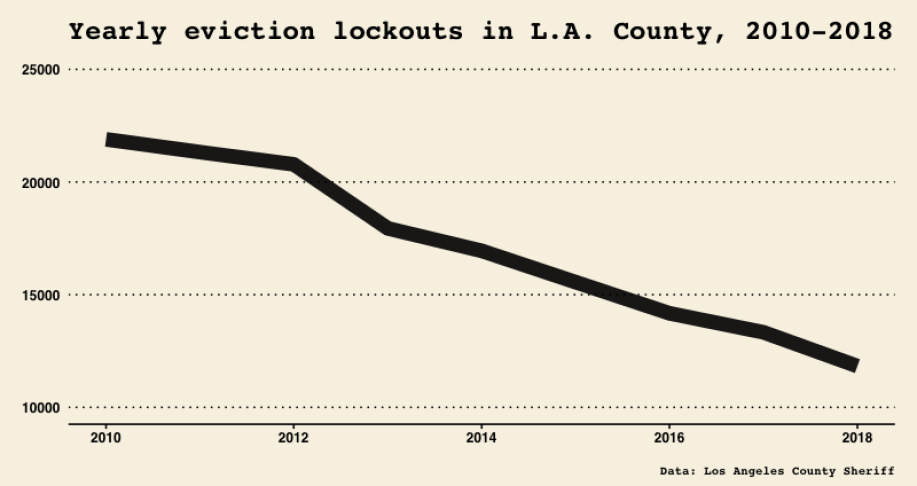 The late fee Presley Wilson faces is also a common practice at properties managed by or connected to PAMA. For tenants living at the bottom rung of the socioeconomic ladder, such fees can be crippling. “Fifty dollars is make or break in terms of feeding their family,” Grant Riley, a plaintiff’s attorney who has sued PAMA, said.

Across PAMA’s estimated 16,000 units, late fees could add up to more than a million dollars per year.

Health and safety issues are also common at PAMA properties. The California Trailer Grove experienced a typhus outbreak in 2015, the first outbreak of the medieval disease in L.A. County in six years.

GEARING UP FOR APRIL

On the phone in her mobile home, Presley Wilson was relieved when I told her that courts aren’t currently moving forward on eviction cases.

“I definitely can breathe a little easier,” she said.

On the 23rd, Wilson received a letter from her management company. “We understand some of you may experience financial challenges due to the impact of COVID-19,” it reads. The letter said that tenants who couldn’t pay rent due to the virus might be granted relief, though it does not go into detail.

Wilsomn planned to write the company about rent relief; she wasn’t holding out hope.

After I initially talked to Wilson, I contacted L.A. County’s Department of Public Social Services to ask about her situation with Emergency Assistance to Prevent Eviction. Wilson said she received a call from a social worker later that day. She now hopes to receive support to help pay her March rent.

But even if that happens, April 1st is right around the corner. And Wilson said that in just a few days, many of her neighbors will be in trouble.

“None of us are going to be able to come up with that money by then. I know, definitely, I won’t be able to,” Wilson said. “No way.”

Get our daily newsletter for the latest on COVID-19 and other top local headlines.