The Trump team confirms all of our worst fears. 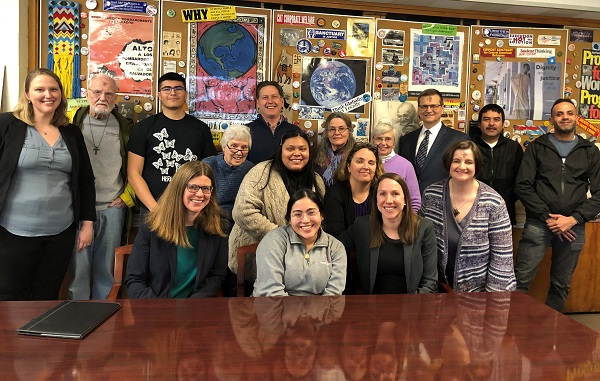 CINCINNATI, OH – On Wednesday, February 26, 2020 members and supporters of the Intercommunity Justice and Peace Center (IJPC) gathered alongside Advocates for Basic Legal Equality (ABLE) to celebrate a federal district court judge’s decision to block a discriminatory policy enacted by the Ohio Bureau of Motor Vehicles (BMV) that denied driver’s licenses and Ohio identification cards to 16- and 17-year olds with foreign-born parents because of their parents’ immigration status.

“We take for granted how much power a driver’s license grants you, to be able to move freely and go about your life,” shared Allison Reynolds-Berry, executive director of IJPC.

IJPC and six individual plaintiffs filed a class action complaint against the BMV in October of 2018 in the United States District Court for the Southern District of Ohio Eastern Division. The lawsuit was brought by ABLE, a nonprofit law firm, and Porter Wright, on behalf of IJPC and the plaintiffs, after IJPC learned that members of their Youth Educating Society (YES) program were being unlawfully turned away by the BMV. It was discovered that U.S. citizens and documented immigrant youth who were otherwise eligible for a driver’s license were being denied because BMV policy stated that their undocumented parents cannot serve as cosigners on the minor’s applications because they didn’t have a U.S. issued ID.

IJPC’s Youth Educating Society program empowers immigrant youth and allies through support and education to cultivate social and legislative change for a more inclusive and just society. One YES leader, Karina, boldy shared her story as one of the main plaintiffs on this case. She shared, “I called my cousin and I told him the news. The reaction on his face was priceless. It seemed as if wings had regrown on him. He’s sixteen and now he’s able to get his driver’s license and so will his siblings.”

This ruling will grant an estimated 3,000+ U.S. citizen or documented non-citizen children living in Ohio the ability to drive.

“Going forward the BMV will not be able to require that parents present proof of lawful presence in order to cosign their children’s driver’s license applications,” said Emily Brown, co-counsel from ABLE. She continued, “The ability to drive…especially in a state of Ohio with limited public transportation is fundamental to accessing many human rights like working, attending school, caring for family members and obtaining medical care.”

ABLE also received a ruling on a related lawsuit filed on behalf of three other plaintiffs, including Community Refugee and Immigration Services, a refugee resettlement agency in Columbus.

That related ruling overturns another BMV policy, which effectively denied licenses to lawfully admitted refugees if those refugees have not adjusted their status to lawful permanent residence within two years of their arrival in the U.S.

Economist Nouriel Roubini correctly predicted the 2008 financial crisis. Now, he believes that stock markets will plunge by 30 to 40 percent because of the coronavirus. And that Trump will lose his re-election bid.

California is monitoring more than 8,400 people for coronavirus symptoms after arrival on commercial flights, but the state lacks test kits and is being held back by federal testing rules, Governor Gavin Newsom said on Thursday.

Team members were not properly trained, lacked necessary gear and moved freely around and off military bases where Americans were quarantined, a complaint says.

Australia’s Olympic bosses are urging calm amid the daily questions around the Tokyo Olympics and coronavirus, mostly because those questions cannot be answered, writes David Mark.
— Read on mobile.abc.net.au/news/2020-02-27/olympics-and-coronavirus-preparation-athletes-told-to-carry-on/12006258