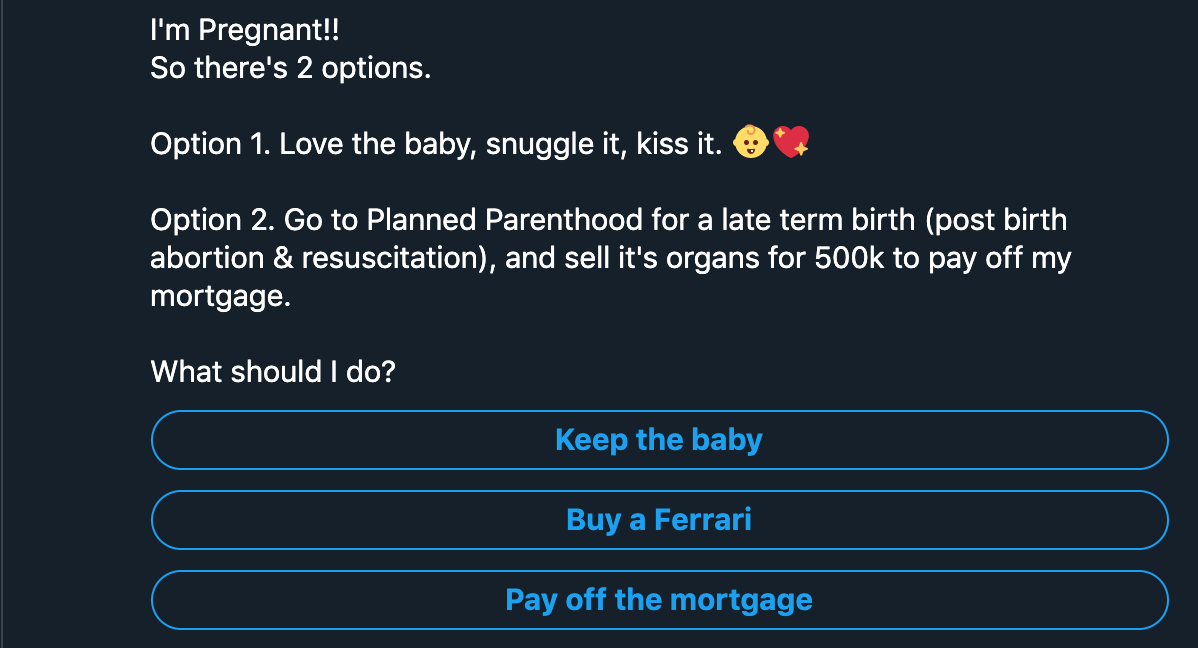 Abortion is one of those things about which almost everyone has an opinion. However, there was once a time (or it seemed to me that there was a time) when people who were opposed to abortion were actually opposed to abortion, as opposed to weird stuff they made up about abortion. I don’t know if that was necessarily better, but it was at least somewhat grounded in reality. There was somewhere to go with that, I guess.

But now, thanks to years and years of misinformation efforts, there are a lot of people out there who are positively outraged about allegedly abortion-related things that are definitely not possible. Like the idea that post-birth abortions are a thing.

The first time I heard anything close to this theory was when then-candidate Donald Trump tried to claim, during a debate, that under the current laws “[y]ou can take the baby and rip the baby out of the womb in the ninth month, on the final day.” At the time, it seemed that everyone knew this was bullshit. Pro-choicers thought it was ridiculous, and anti-choicers assumed that he was just new to their cause and thus not clear on the rhetoric yet. Like the time when he said that he would love to throw women in jail for having abortions, and the anti-choicers had to reel him back and do the whole “actually we don’t tell people that’s what we want” thing.

But since then, it’s become a whole thing. It’s gone deeper. Now they’re claiming doctors are just whacking babies over the head as they’re coming out the birth canal. Rather than being clear about the fact that Donald Trump said a thing that is obviously untrue, the Right has decided to just run with it, because sure, why not? Anyone who would point out that it is not true is probably a liberal anyway!

It’s become such a game of telephone, with people mixing and matching their favorite abortion conspiracy theories, that we have ended up with this gem of a poll from a notorious Twitter anti-feminist. 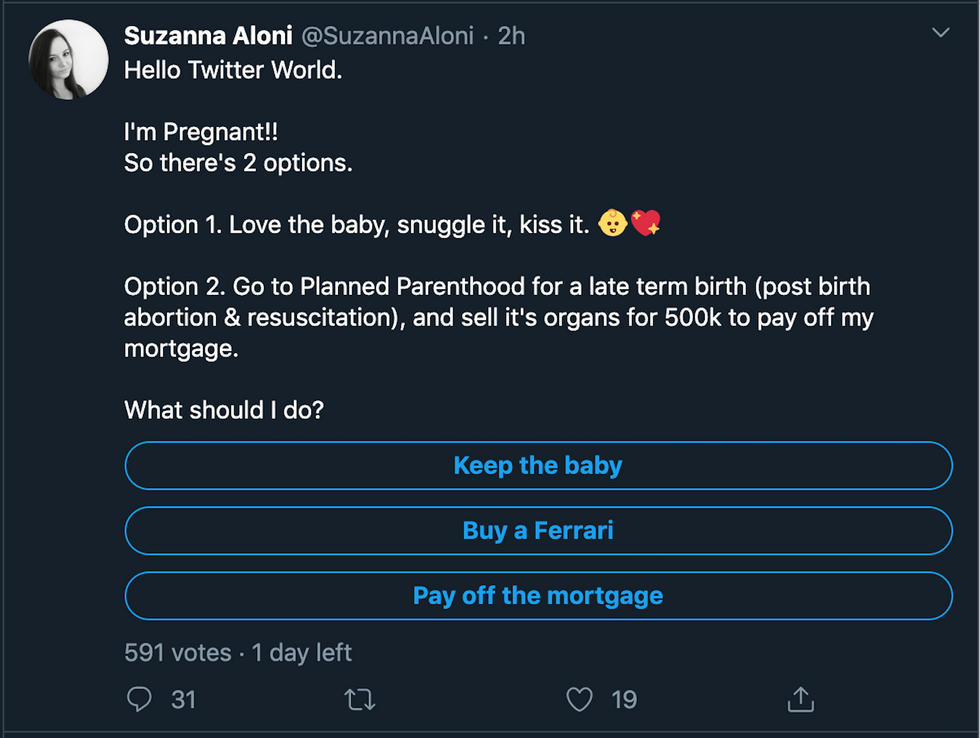 Option 1. Love the baby, snuggle it, kiss it.

Option 2. Go to Planned Parenthood for a late term birth (post birth abortion & resuscitation), and sell it’s [sic] organs for 500k to pay off my mortgage. What should I do?

Then the voter is given an option for A) Keep the baby, B) Buy a Ferrari, and C) Pay off the mortgage.

This comes, by the way, from a woman who has previously argued that women should not be able to vote or own property. 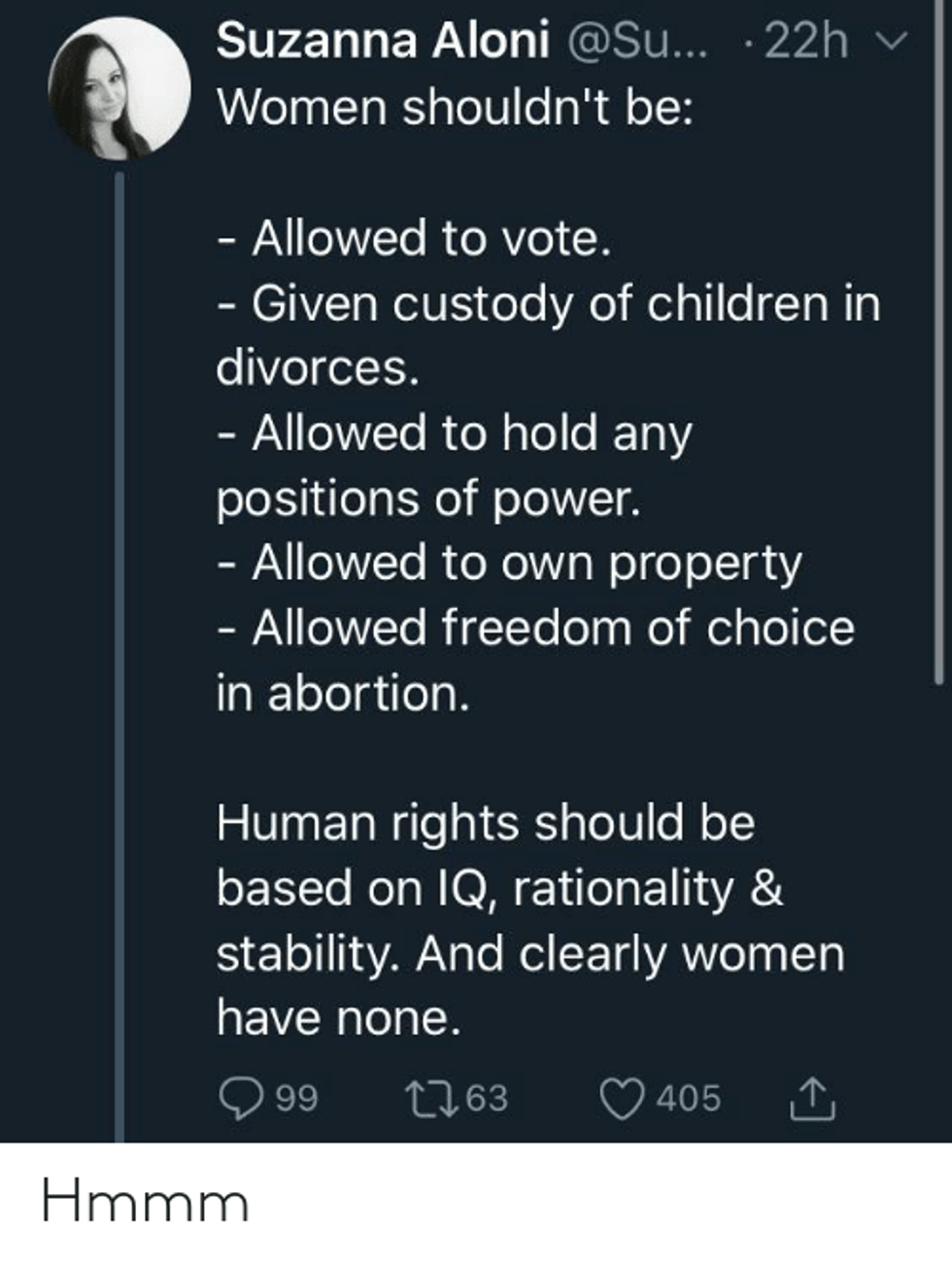 Normally, I probably would have mocked this briefly on Twitter and moved on. But you know what? We are being far too nice and gentle about people believing this crap. It doesn’t get mocked half as much as anti-vaxx crap or QAnon crap or climate denial crap and frankly, it’s just as serious.

Just to be clear! There’s no such thing as a post-birth abortion. Late-term abortions are extremely rare and pretty much never performed inside Planned Parenthood clinics, and it is illegal to sell organs. Planned Parenthood was not selling baby organs to make a profit, it was donating fetal tissue and being paid a standard donation fee. If this were a common occurrence or even something it were at all possible to do, there would be a whole lot more women out there driving Ferraris.

If one were to go into labor, have a baby, kill the baby and then sell the baby’s organs, one would go to jail. Because it’s not actually legal to just go ahead and kill a baby you just gave birth to. That is very different from offering palliative care in the case of an infant that is not going to survive.

Also, if you successfully resuscitate a baby, that means it is not dead. Just sayin’!

You all know this. I know this. But we have a serious problem with people just casually believing these things are true, and people believing them is going to make this an even more fertile environment for taking our reproductive rights away. No pun intended. Ignoring things like this or gently saying “Actually, you know, doctors say that isn’t true,” instead of “That is ridiculous, you are an idiot, and if you try that you will definitely go to jail” is not helpful when we are this close to Roe getting overturned.