next they will also embrace anti-vaxers. More concerned about fake freedom than killing learning and children.

One Nation supporters are notably less satisfied with teachers and the education system than any other voters, Australia Talks data shows, with conservatives warning a “tide is turning” and parents will look for alternatives.

The 12 witnesses have corroborated each other’s evidence and a cohesive narrative is now clear. The US President is firmly at the centre, writes Zoe Daniel.

A Muslim scholar of Sanskrit has gone into hiding after protests from some rightwing Hindu students claiming that, as a Muslim, he cannot teach Sanskrit, the ancient classical language of Hinduism.

Feroz Khan, 29, was the unanimous choice of a selection committee at Banaras Hindu University in Varanasi for the post of assistant professor of Sanskrit literature. The committee members were impressed with his erudition, which stems from a childhood passion for the language that continued into further education.

Meeting took place as Facebook chief was being grilled by the House, NBC News reports, with Peter Thiel also in attendance

Donald Trump hosted the Facebook chief executive Mark Zuckerberg for a private dinner at the White House in October.

NBC News revealed that the meeting, which had not previously been disclosed, took place when Zuckerberg was in Washington being grilled by Congress over topics including Facebook’s limited steps to ban to misinformation in political advertising.

Free broadband. Free adult learning. Free dental care. The biggest council house building programme in decade. Abolish student tuition fees and bring back maintenance grants. All paid for by squeezing the rich, raising corporation tax, making tech giants pay the exchequer a fair whack, and by borrowing more. As Jeremy Corbyn was proud to state, this was the most radical Labour party manifesto in years.

One of the questions asked at the document’s launch was if Labour wanted to turn the clock back to the 1970s. Actually, the inspiration was more Clement Attlee in 1945 than Tony Benn 30 years later. Labour’s starting point, as at the end of the second world war, was that something has gone fundamentally wrong with free-market capitalism and only a socialist transformation can put things right.

According to the BBC, Johnson & Johnson has lost a class action lawsuit in Australia’s federal court after more than 1,350 women sued the company’s subsidiary Ethicon for failing to disclose the dangers of vaginal mesh to its consumers. Those patients claimed to have “suffered chronic pain, bleeding and severe… 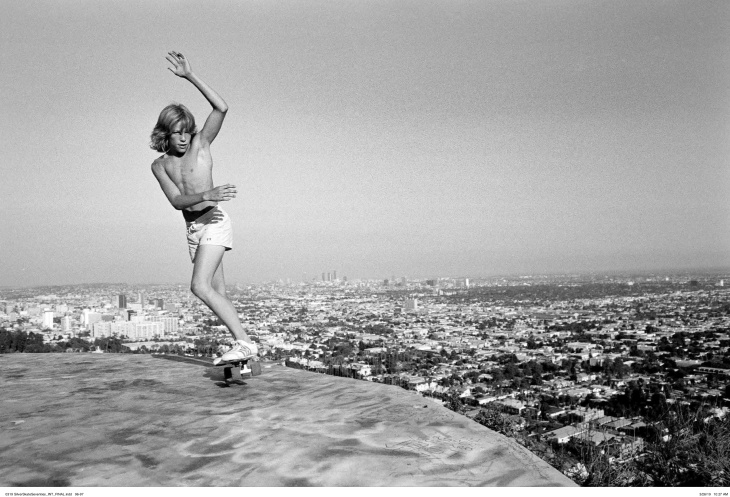 Hugh Holland first remembers spotting a wave of skateboarders outside of his custom L.A. furniture finishing store in the mid-1970s.

“At the time, I happened to be photographing anything that was in front of my camera,” Holland said. He wasn’t a pro photographer — but he did have a darkroom.

Holland started following the new movement, and the skaters themselves. What really captures his imagination was what he saw in 1975 in the Hollywood Hills: vertical skating up ramps. He grabbed his camera from his car and started shooting.

“The vertical was really something radical and new,” Holland said. 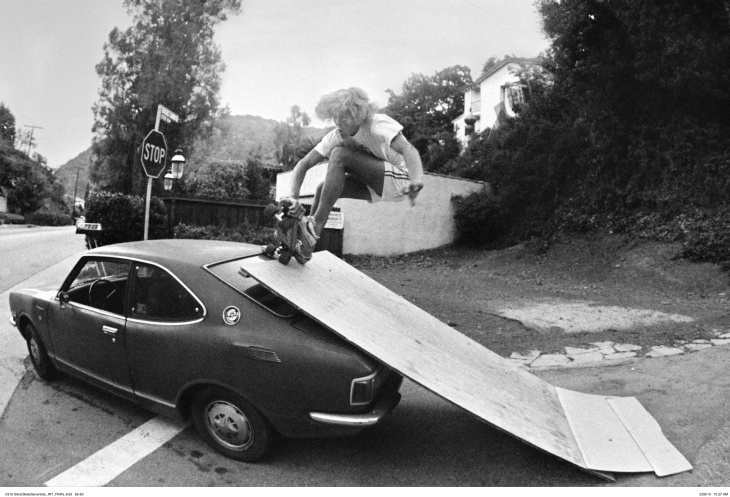 He started spending time with the skaters almost daily — after work and on the weekends, for three years. Holland eventually made a name for himself documenting this time, and the latest collection of his ’70s skating photos can be seen in his photography book Silver Skate Seventies.

One of the things that helped fuel the growth of skateboarding at the time: drought. Along with a new kind of wheels, it helped the skateboarding phenomenon to grow.

After a dry winter in ’75-’76, everyone started emptying their pools to save water, according to Holland — but they were quickly filled with skaters looking for more ramps. Dry storm drains were also a good fit. 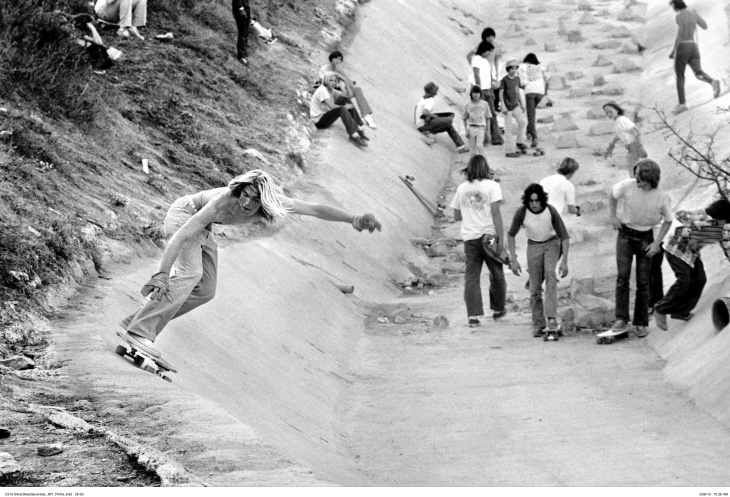 The drought combined with the creation of the urethane wheel, which allowed boards to have more traction. Together, these conditions helped make higher level skateboarding — including the vertical — possible.

The weather conditions met the creation of the urethane wheel, which allowed boards to have more traction. Together, these conditions helped make a higher level of skateboarding — including the vertical — now possible.

“We had the discovery of all these tools, and I was right there with them,” Holland said. “Everyone was in competition with themselves, and each other to get higher, and get out of the pool, out of the boundaries — how radical they could be.”

Silver Skate Seventies is a followup to Holland’s previous book, Locals Only, but this one features his black-and-white photography. Black and white, he said, allowed him be more raw in his process instead of thinking about the cost of color film. 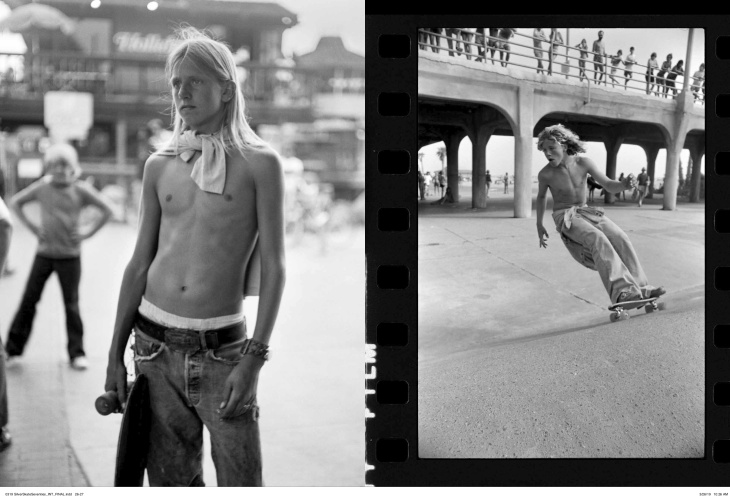 Holland wanted to capture the skaters’ fashion. He described it as surfing style coming on land, cutting up the asphalt with ballet on concrete. Skateboarding has its roots in surfing, and it was a natural outlet for kids in the San Fernando Valley who couldn’t easily make their way out to the ocean, according to Holland. 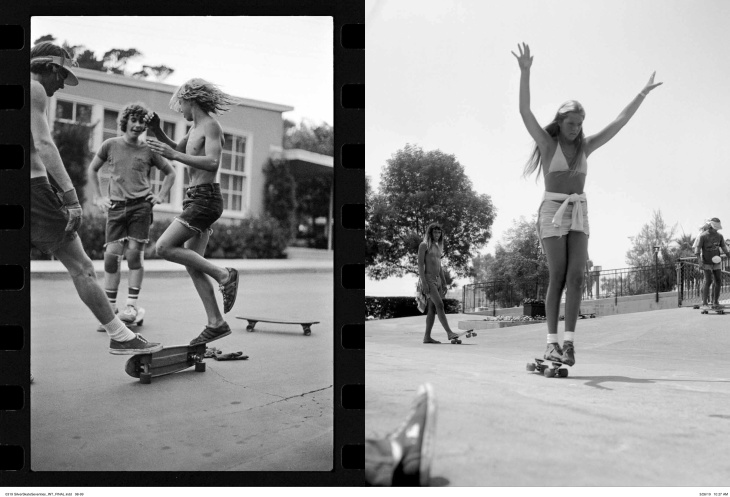 These mostly teenage skaters didn’t need cellphones to stay connected, according to Holland. Word spread person to person, and they were always able to keep each other in the know about the hot places to skate.

“I had a car, so I was able to help them be more mobile — the kids that I hung out with — then I just ended up being all over, everywhere,” Holland said.

Holland moved to California in 1966 from Oklahoma.

“All the young people were coming to California that could get away from anywhere, it seemed like,” Holland said.

One of the skaters from Holland’s books who he’s gotten back in touch with told him the reason many of the kids would go out skating at the time was because of problems at home. They had to get out of the house, he said. 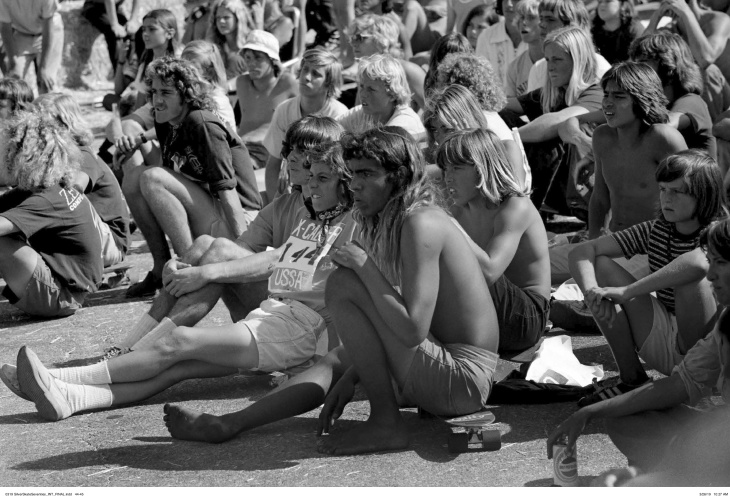 While he loved shooting all of the action, Holland’s favorite photos are the ones with skateboarders just hanging out on the street.

At the end of 1976 and into 1977, skate parks started to become the thing, according to Holland.

“They would charge admission, and they would have insurance — things start commercializing really quick,” Holland said. 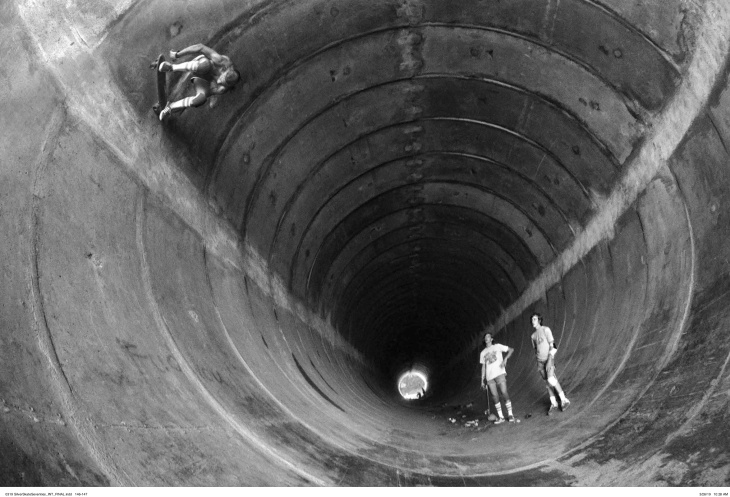 Holland had enjoyed shooting the skaters and their carefree, barefoot style, as he put it — he started to lose interest in the late ’70s as the culture became more formalized.

But over the years, people started to take an interest in Holland’s photos. His big break came when one of the few photos he’d sold was seen by the owner of American Apparel, who ended up showing Holland’s work in his stores around the summer of 2005, according to Holland.

Now his photos can be seen in galleries, as well as in bookstores everywhere. Silver Skate Seventies is available now.

TUCSON — Scott Warren, the No More Deaths/No Más Muertes humanitarian aid volunteer charged with two felony counts of “harboring” immigrants by giving them food and water in the desert, was found not guilty today by the federal jury in Tucson, Arizona. A guilty verdict would have had a chilling effect on all human rights organizations