The story of the peace globes began in 2006. Today I am sharing the story of my grandfather’s marbles as is my custom during peace week.  This was the first Dona nobis Pacem in the Blogosphere. Every year on November 4th, bloggers blog for peace, today reaching into Instagram, Facebook, Twitter and all social media platforms. You don’t have to have a blog to blog for peace.  Please join us. Wherever you are.Go HERE to learn how and get your own peace globe. 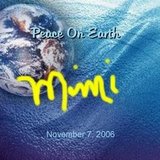 The Silence of PeacePapa’s marblesThey’ve been sitting on my piano for more years than I care to count, on the corner of the Kohler and Campbell my grandfather gave me when I was fourteen years old. After he died, I found them in a tattered and dirty bag at the bottom of a box full of his personal things. He wanted me to have them. His marbles.Handmade rough-hewn marbles crafted from rock by my grandfather and his brothers. The year was 1920 and there was no money for toys.I often wondered why he didn’t leave them for a male member of the family. Honestly, folks, it wasn’t until just tonight – the eve of Dona Nobis Pacem in the Blogosphere – that I discovered the answer.I know stranger things have happened.I just can’t recall when.

I knew this post would not be written until the last moment. I wanted to hear the muse. I waited to hear the muse. And yet….it is still a little while before midnight in my part of the United States and I’m supposed to be spinning out a masterpiece of goodwill and peace prose – maybe a stunning poem like those we’ve already seen from people around the globe. A song, a lyric, a new tune.Instead, Mimi Pencil Skirt wants to talk about rocks.So I went into my study and began to polish them. One by one. The bowl, the piano, the granite. How many times have I sat at that very bench and casually glanced into that bowl? Thousands. Song after song. Tune after tune. Lesson after lesson. Arpeggios and scales. Hymns and Beethoven.Polish them, Mimi, polish them….

He didn’t have a lot of money it seems to me now, my grandfather. At the time though, he was the richest man I knew. And he has been on my mind this week more often than not. Well over six-feet tall and always impeccably dressed, my Papa was the most humble man I’ve ever met.When he passed away I met scores of people who told me what he’d meant to them. “He helped me when I needed money…..” “I never met anyone with as much character as your grandfather…”  “He gave me his shoes….” and on and on.His kindness was not news to me. The fact that a large portion of the town showed up at his wake was, however, a stunning surprise. I didn’t know I’d been sharing him all those years.He made me feel as if I were the only one in the world.Strange, those marbles. All different shapes and sizes. Colors, too. Yet they’ve co-existed for years right there atop the long- lovingly- played strings inside my piano, the one Papa used his savings account to buy for me while he worked two jobs at the factory and made time up on Saturdays when he missed work hours to drive me to my lessons during the week.I was a bit different as a child. Artistic. Content with solitude. Always writing in endless journals and playing broody piano music. Papa didn’t pamper me – even though that’s a disputed fact to this day in my family –

What he did was more earth-shattering.

The one on top. That one.Different…that one. I know that’s the very one he made. I’m sure of it.When I think about peace and what it means to me, I always wander back to a time when I first felt it. Because I know on a subconscious level that world peace cannot and will not be achieved without multitudes of people on planet earth finding personal inner peace. Adversaries on both sides of the conflict have to have it. You can’t weave magical tranquility out of thin air and conferences. Peace is a state of being. It inhabits every cell of your body, just like Papa’s prayers.It has an energy of its own. Real lasting peace is born of creative jumble and hard work. True victories for humanity are never won by the one who has the most power. Wars are won, but not lasting peaceful reconciliations between nations.  We lay down our weapons and neglect to continue the peacebuilding.  It never lasts. There’s a hideous price when power and greed rule the process.Papa’s Marbles. Not a pretty one in the bunch.Every one brown or taupe.

Almost every one.I started thinking this week about those times in my lifewhen I first felt real peace.For me, it came in the presence of God at an early age. Not because I am privileged or special. But simply because I was loved. Unconditionally.Sometimes it takes just one personto unlock magic in someone else.I watched that kind of magic flow through my grandfather’s life. He was in tune with who he was. He knew the simple meaning of love. He knew how to pray. I often wondered how other people sensed that about him without the benefit of those life-giving hugs he saved just for me.He chose the color himself, Papa…..he must have spent hours honing that rock.I often went with him to backwoods church services, usually of the United Methodist variety. Informal revivals, formal services, anywhere there was special music and a spirit of God, he was there. I can’t explain it really. We would visit churches and the minister would ask him to lead the invocation, lift up the sick or the needs of those present or say the benediction – even though they’d never met. Wherever we went, he was asked to pray. How did they know he could pray?  I knew he could pray…..my grandmother knew he could pray……but how did they know?

Taking his hat off and bowing his head, he would very quietly hold audience with his Maker. Before the opening of his brown felt hat hit the buttons of his shirt, he was already in the presence of his God.  Just the two of them in front of a congregation of worshipers.  It didn’t matter how many people were listening. His prayers always began the same way……“Dear Gracious Heavenly Father……”No matter where. Or with whom. Or in front of whom.Hat in hand. Head bowed. He knew how to reach God.And people sensed that when they met him. If peace can be worn like a garment then he was always finely clothed, my Papa.One night he took me by the hand and led me to the altar with him. He knelt down on one knee, elbow resting on the other with his head bowed in the palm of his praying hand, silently and fervently voicing his heart to the Almighty. He never let go of my hand.  What an electric experience to be right there beside him!  He was teaching by example. I could hardly breathe.Papa prayed. God heard. I was in awe. I could sense the earnest and tender openness of his heart before God. I could feel the love he had for his Heavenly Father. Humility. Reverence. Respect. It was a gift I carried with me the rest of my life.He made them with his own hands. He molded them into shape.Created them and lovingly took care of them. He chose the color.Not a sonata or a novel. Certainly nothing extravagant or fancy.Just ordinary marbles.Tonight I’m sitting at my table writing stories on an electronic device that sends messages to people all over the planet about globe graphics and insomnia, making pots of endless coffee to stay awake, answering emails from Germany, London, China, New York , Oman and beyond.Could Papa have ever imagined such a thing?Did he?What was he praying about all that time anyway?Papa’s marbles…..There’s something odd about them.Oh, forget about it. They’re just a bunch of rocks. You’ve got a story to write. Can’t you think of something brilliant? It’s past midnight and everyone has their peace globe up but you.I struggled. There’s something missing here, I thought.It’s about Papa. I can’t stop thinking about him.What would he say to me tonight? How would he pray??The marbles.Look closer.When it hit me, I was way past the point of arguing with myself about miracles and such. I’ve seen too many come through my mailbox today to argue with God about that.

Do you see it?The blue one on top.It looks like a globe.Dona Nobis Pacem did not start with Mimi. It started in 1920 when a little boy in the rural southeastern United States decided to shape a small blue marble – for his granddaughter.

Join us for Blog4Peace Nov 4