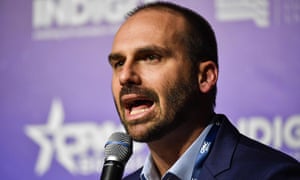 Voices from across Brazil’s political spectrum have condemned the son of the far-right president, Jair Bolsonaro, after he suggested hardline dictatorship-era tactics might be needed to crush his father’s leftist foes.

Related: An explosion of protest, a howl of rage – but not a Latin American spring