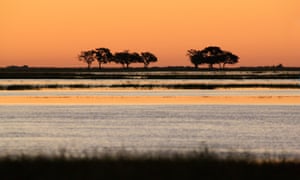 Other scientists raise questions about results, which were based on DNA samples

Scientists claim to have traced the ancestral home region of all living humans to a vast wetland that sprawled over much of modern day Botswana and served as an oasis in an otherwise parched expanse of Africa.

The swathe of land south of the Zambezi River became a thriving home to Homo sapiens 200,000 years ago, the researchers suggest, and sustained an isolated, founder population of modern humans for at least 70,000 years.