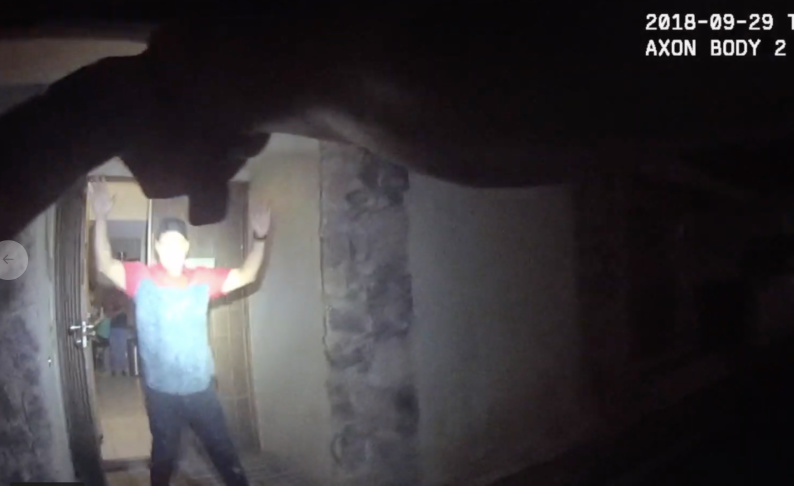 Body camera video released Friday by the San Bernardino Police Department shows one of its officers fatally shooting an unarmed man holding his hands in the air.

The shooting of Richard John Sanchez on September 28, 2018, occurred after a member of his family called 911 to report Sanchez had threatened family members with a gun. 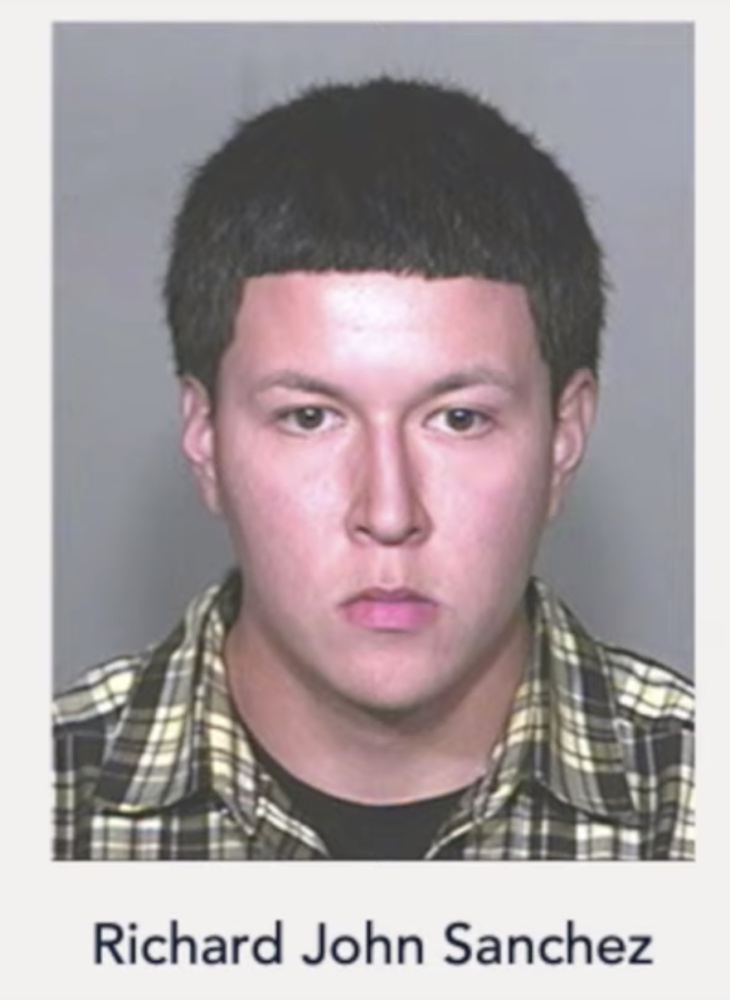 An undated photo of Sanchez was included in the video released about his fatal shooting (Courtest of the San Bernardino Police Dept.)

According to police, the caller, identified as his sister-in-law, also told the 911 operator that Sanchez was intoxicated and making irrational statements such as he had everyone under his control because he was God.

Authorities also said Sanchez, who was 27, had a felony arrest warrant that responding officers knew about at the time of the incident.

Members of Sanchez’s family released a statement expressing grief and anguish over his death, but also praise for the police department’s handling of the investigation.

“While Richard’s sudden passing has left a void that
cannot be filled in the lives of his family members,” the statement said, “the family is honored and encouraged by the swift acceptance of responsibility by the leadership of the San Bernardino Police Department — whose investigation into this tragic incident was aimed at uncovering the truth, even when this meant acknowledging the mistakes of a fellow officer.”

The video, released late on a Friday more than a year after the fatal shooting, shows officers outside the front door repeatedly ordering Sanchez to drop the gun as he stands just inside the home. Sanchez places the gun on a couch and walks out the door, according to the police account of the incident.

Police officers then repeatedly order Sanchez to raise his hands. He raises his hands and keeps walking toward them. Sanchez appears to be just a few feet away from the officers when one officer fires five times.

The officer no longer works for the department, according to police. It’s unclear whether he resigned or was fired.

“Upon completion of our internal investigation and review process, we’ve concluded that one of our officer’s decision-making did not meet the standards held by our department or the community we serve,” said Acting Chief Eric McBride. “As a result, he no longer works for the San Bernardino Police Department.”

McBride gives the officer’s last name in the video, but his department did not immediately provide a first name or a spelling. He emphasized that the internal review did not determine whether the now former officer’s actions were criminal.

The San Bernardino District Attorney is investigating the incident and will decide whether to file criminal charges against the officer.

WHAT THE VIDEO INCLUDES

The department’s video includes the acting chief’s statement and narration from a sergeant. It shows a aerial photo of the home of where Sanchez was shot, a previous photo of Sanchez and audio of the 911 call – as well as segments from the camera worn by the officer who opened fire.

The production mirrors those from the LAPD, which was the first department in the nation to release videos of shootings on a regular basis.

Under a state law that took effect July 1, all police departments are now required to release body-worn camera video of officer-involved shootings within 45 days of the incident, unless the department can “clear and convincing evidence that disclosure would substantially interfere with the investigation.”

This video was not subject to the law because it was taken before the law was enacted. It’s unclear why the department decided to release it at this time.

FULL STATEMENT RELEASED BY THE FAMILY OF RICHARD SANCHEZ

The family of Richard Sanchez remains overcome with grief over the sudden and unexpected loss of their beloved husband, brother, father, and son and continue to feel the anguish on a daily basis from the loss of a life that cannot be replaced.

While Richard’s sudden passing has left a void that cannot be filled in the lives of his family members, the family is honored and encouraged by the swift acceptance of responsibility by the leadership of the San Bernardino Police Department–whose investigation into this tragic incident was aimed at uncovering the truth, even when this meant acknowledging the mistakes of a fellow officer.

By pursuing the truth and by adopting a transparent approach to the investigation of this officer-involved-shooting, the San Bernardino Police Department has demonstrated a model of transparency in which the Sanchez family hopes is emulated by police departments facing similar incidents nationwide.

8:15 p.m.: This article was updated with comments from Sanchez’s family.

8 p.m.: This article was updated with a description of how the video was produced and additional background about state law related to the release of body cam and other police video.

7:50 p.m.: This article was updated with the information that the 911 caller was identified as Sanchez’s sister-in-law.

This article was originally published at 7:25 p.m.

“The problem is we need some money,’’ Mr. Giuliani says on the call. Then he adds: “We need a few hundred thousand.’’

Money can’t buy you love! Mark Zuckerberg can’t be understood in terms of partisan politics. It’s all about growth.

As many as a million Chileans protested peacefully late into the evening on Friday in the capital Santiago in the biggest rallies yet since violence broke out a week ago over entrenched inequality in the South American nation.

As cases reach 3,260, the US remains the top donor, but the future of Ebola funding remains unclear.

The All Pueblo Council of Governors, representing the collective voice of the member 20 sovereign Pueblo nations of New Mexico and Texas, convened Thursday affirming commitment to protect Pueblo natural and cultural resources from risks associated with transport of the nation’s growing inventory of high level nuclear waste from sites across the country to proposed […]

SIOUX FALLS, S.D. — South Dakota Governor Kristi Noem and Attorney General Jason Ravnsborg yesterday backed down from their unconstitutional attempts to silence protesters. Under a settlement agreement, which was submitted for court approval yesterday, the state agreed to never enforce current state laws that prohibit protected speech and are aimed at suppressing protests against the Keystone XL […] 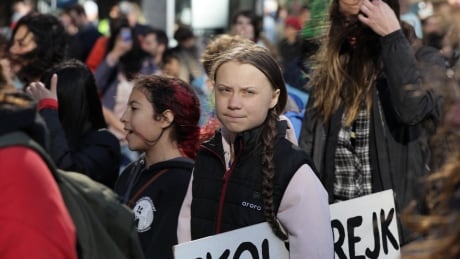 Swedish climate activist Greta Thunberg addressed thousands of demonstrators at a rally in downtown Vancouver on Friday, an event billed as a post-election push for Canadian leaders to take action on the climate crisis.

Jose Segovia-Benitez, who has been convicted of several felonies, was sent out of the United States this week and is now in hiding in El Salvador, his lawyer said.